Drones are proving to be a headache in tourist hotspots like Queenstown and Tekapo - prompting the Civil Aviation Authority to look at tougher rules for recreational drone operators. 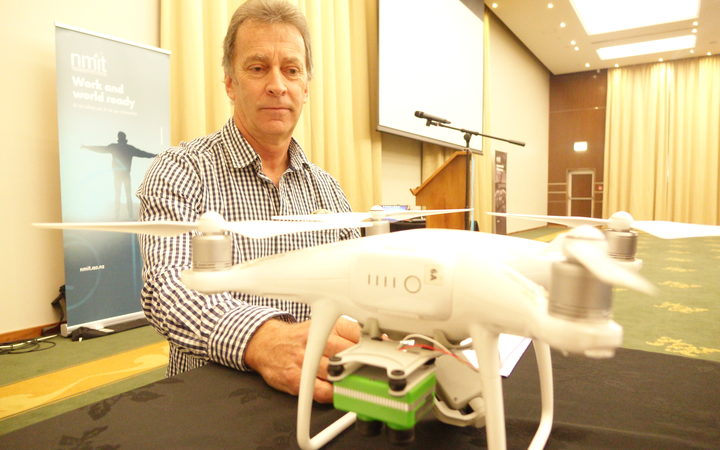 The Civil Aviation Authority (CAA) said an independently commissioned survey showed there were now around 280,000 Kiwis who either owned a drone or had flown one.

CAA said it was more worried about the 200,000 overseas tourists who brought their drones on holiday with them here each year.

They were among a list of points raised at a seminar in Nelson for commercial drone operators and aviation industry specialists.

Mr Houston said while some tourists took the time to ask about the rules before bringing their drone, many did not and were unaware of the rules around privacy and safety.

He said it was causing problems in pressure points like Queenstown, Milford Sound and one of the country's most photographed chapels - the Church of the Good Shepherd.

"I was in Tekapo recently and they were having tremendous issues with drones being flown around the wee church on the lakeshore there. There were people trying to fly in through the doors and things like that."

CAA was working with tour companies to highlight the rules around drone use, Mr Houston said.

Specialists said modern technology meant drones were now easier to operate than a model aeroplane, and people could have their own aircraft for just for $1000.

Avaition sector advisor Ken McMillan of Service IQ, an industry training organisation that set aviation unit standards, said the technology had taken off faster than the rules had kept pace with

"When the drone phenomenon took off everyone raced in and tried to organise everything, but the magnitude of drone flying has outgrown qualifications, if you like, so what we've had in the past is really, really outdated."

CAA said there were now 105 certified commercial drone operators and another 40 waiting to be certified. The biggest growth in commercial use had come from real estate agents.

Although there were fewer rules governing recreational users they still had to meet a range of conditions such as not flying within 4km of an airport and having the consent of anyone they want to fly above.

"That's not to say it's not happening elsewhere but to actually see a drone is pretty difficult, so when a pilot reports a drone, it's the tip of the ice-berg," he said.

Air New Zealand demanded tougher rules for drone operators after a drone came within an estimated 5m of one of its planes at Auckland Airport in March.

"It's a very accurate holographic radar system that can, apparently, tell the difference between a drone and a sparrow about eight miles away."

Mr Sharp agreed it was time the rules were reviewed for drone use.

"As air traffic controllers we can only apply the procedures applicable to the rules, but we don't make the rules, so we have to wait for the regulator (CAA) to create the regulatory framework that we can then develop our procedures, and to keep it safe."

Mr Houston said the 1542 bird strikes and 281 reported laser strikes on aircrafts over the past three years remained a bigger risk to aviation than drones.

He said the main risk remained one of flying over people.

Mr Sharp said the risk to people on the ground was largely ignored in the debate.

"You've got something that weighs three or four kilograms doing 50km/h ... it could take someone's head off, or take a car off the road. So they are potentially very hazardous."

This week it launched a new campaign aimed at informing people on safe drone operation and how to report dangerous drone activity.