Kaipara people who don't want New Zealand's biggest chicken farm in their neighbourhood are stepping up their campaign against it. 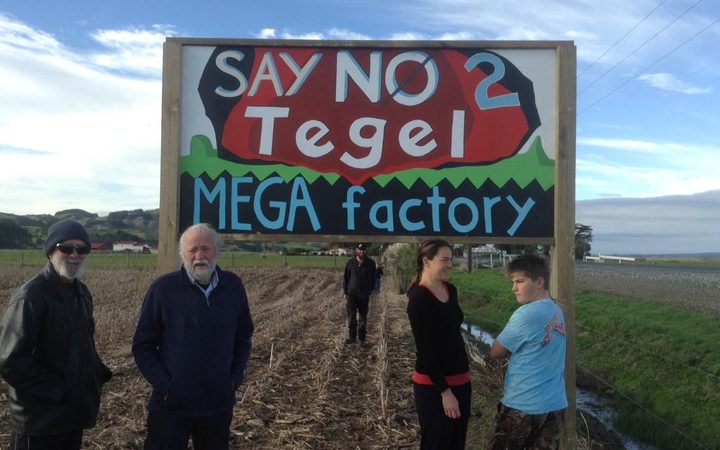 The roadside signs against the Tegel farm were painted by a local artist. Photo: RNZ/Lois Williams.

Poultry giant Tegel has applied for resource consents to raise 9 million birds a year, partly in barns, on former dairy farm land at Arapohue, next to the Northern Wairoa River.

Big roadside billboards painted by local artist David Sarich went up at the weekend, near the boundary of the proposed farm at Arapohue.

The Kaipara Community Association said the group has engaged lawyers to represent it at resource consent hearings.

Spokesperson Rosie Donovan said its thirty members were fundraising to pay for the lawyers and expert witnesses.

"We've only got two experts. Tegel's fronting eighteen," she said.

"It's been very hard to get across the scope of it and I think a lot of people have seen it as nimbyism.

"There's very real concerns about avian influenza and antimicrobial resistance coming out of an industrial factory like this."

Tegel said it wanted to use new technologies to move into what it called the next phase of poultry production, and satisfy demand for free-range, sustainably-produced food.

"This results in a free-range farm that is bigger than any developed in New Zealand, which... presents challenges in the management and operation of the farm," the company said in its application to the Kaipara and Northland Regional Councils.

Tegel said the application had addressed those challenges and adverse effects could be avoided.

But Mr Sarich said the chicken farm would be sustainable in name only.

"If it goes ahead it will scar the landscape for generations to come.

"We need to say no to industrialised farming - this should not be in anyone's backyard."

More than five hundred people have made submissions opposing the chicken farm on grounds including noise, smell, potential pollution and the effects on the amenity values and property values of the small rural community.

Nearby Kāpehu marae is also opposing the development, which would adjoin its urupa.

Commissioners acting for the Kaipara and Northland Regional Councils will hear the case for and against the Tegel plan on 8 August.