New Zealand's hotel industry is experiencing a boom in investment which the country has not seen for decades, a tourism insider says.

Members of the country's hotel industry are due to meet at their annual conference in Auckland next week, to discuss the state of the sector, including the growing demand for more hotels around the country to cater to visitors.

Its chief executive Chris Roberts said despite the boom, the industry could not stand still.

"We've got to raise our game all the time and and that'll be a big focus for the conference.''

The hotel industry was going through a growth spurt, with more than 120 possible new hotels in the country.

"There's a degree of hotel investment that we haven't seen possibly in decades. Of the existing hotels, almost all have been refurbished or are being refurbished and upgraded and there's a lot of interest in building new hotels.''

Part of the challenge for the sector was how to encourage hotels in other towns which were emerging, rather than traditional tourist hotspots.

"Investors are understandably a little bit cautious and really need convincing that an area is going to have a volume of visitors to justify that sort of investment.''

He said the recent announcement of a new hotel being built in Kaikōura was good news, and a sign that businesses had confidence in the town's future post-earthquake. 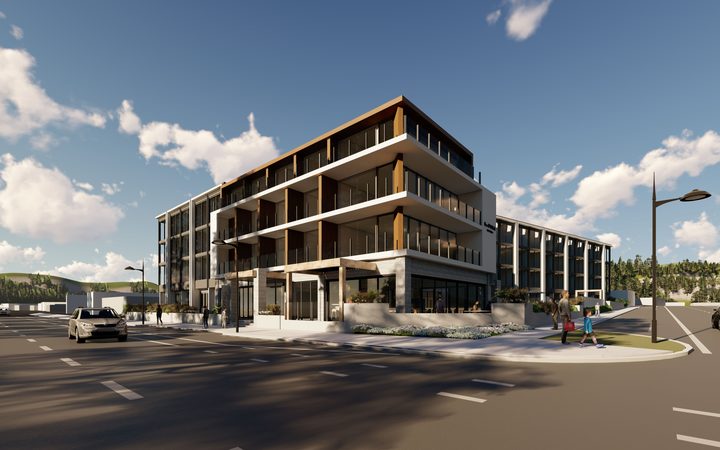 An artist's impression of the new hotel to be bulit in Kaikōura. Photo: Supplied

"Certainly for an investor looking to manage their risk they're still attracted to those centres like Auckland, Wellington and Queenstown and that will always be the case.''

Another challenge for the hotel industry was staffing, which he called a "continual headache''.

The hotel sector still had a great reliance on migrant workers.

"We have to keep doing more to attract New Zealanders but we also need to keep that pipeline open to use workers from overseas.''

Competition from Airbnb was not an issue, however.

"Airbnb is growing about 100 percent a year in terms of properties on offer but with the tourism growth we've seen it's been absorbed and hasn't had a detrimental impact on the hotel sector.

"I'd say it's probably had a bigger impact on the motel sector as there's more direct competition.''

But that might not last: "If we had a tourism downturn, which will inevitably happen at some point, the squeeze may come on at that point for the visitor market."

"But at the moment Airbnb has helped with capacity. If all these hotels get built and visitor numbers drop, then it may get more competitive.''

The government's proposed tourism tax is also not the biggest concern for the sector but the targeted rate, he said.

Mr Roberts said a big focus for the industry at the conference this week would be on continuing to raise the sector's standards.