Emotions ran high at University of Auckland today as students protested its decision to shut down three libraries. 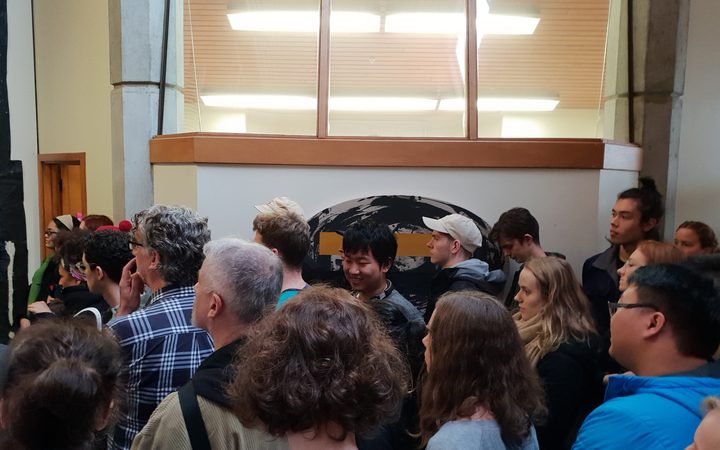 Dozens packed a small corridor outside the Dean of the Creative Arts and Industries department on 21 June to protest against the closure of three specialist libraries on University of Auckland's campus. Photo: RNZ/Tom Furley

Dozens packed a small corridor outside the Dean of the Creative Arts and Industries department this afternoon as student representatives were told the fate of their libraries in a closed door meeting.

The university said they would close the specialist libraries for Elam Fine Arts, Music and Dance, and Architecture students and relocate the books to the general library across campus.

The primary motivation was cost, but also an increasing focus on digital learning.

Former art history professor Tony Green was at the protest and said the library was an irreplaceable resource.

"It means the death of fine arts. If you don't have your library, if you don't have resources, you don't have librarians, because they're being sacked, then your chances of actually getting information to students is seriously diminished," he said.

Mr Green, who taught at the university for nearly 30 years, said people were outraged at both the decision and the consultation process.

"People in there are a damn sight more than sad; they're disgusted. They're angry and they want to see this kind of process end."

As some banged on the door and walls, Elam Student Association president Olyvia Hong was inside with the Dean.

She said it was a one-way conversation.

"They were talking about how they would try their best to make it look and feel like what we've currently got but we know that's never going to be achieved. I mean the fact that they're moving the collections to amalgamate it all, it's very sad."

One Elam staff member told RNZ the school was known for its resources.

"I think it's just a major, major upheaval to our teaching environment. I hesitate to use the word distressing because it could be read as emotional but that is the case. I think many, many students are deeply upset about it and they may [as] well make their voices known by enrolling in another university. 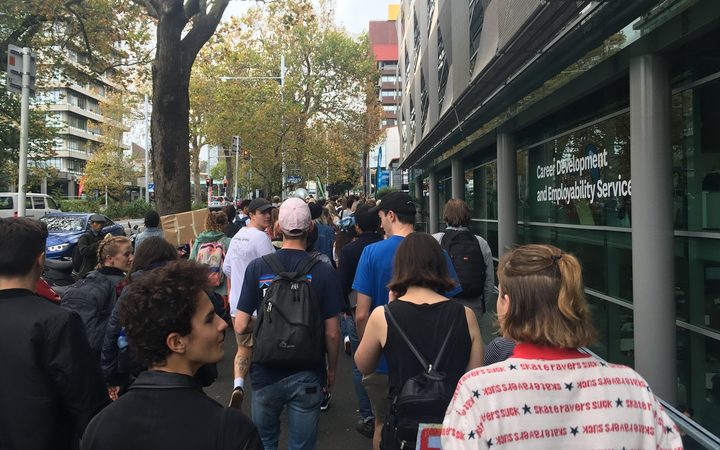 University of Auckland students marching to protest the against the potential closure of specialist libraries earlier this year. Photo: RNZ / Sarah Robson

While he understood it would be an unpopular move, the university would save $3 million to $4 million dollars a year once the process was complete, he said.

"By way of background it should be noted that for more than 20 years' successive governments [on both sides of the House] have favoured policies that reduce the cost of university study to students and government, over policies that enhance the quality of universities," Mr McCutcheon said.

"As a consequence, New Zealand's universities have among the lowest levels of income per student in the developed world."

He said the changes would not affect students' learning.

"While I appreciate that people are attached to what we might call their spaces, in this case their libraries, the reality of the situation that the university is in is that we have to make savings in support services wherever we can in order to invest in our core academic activities."

Ms Hong said there would be more action.

"This is not going to stop us. I think we're going to get louder and louder, and this is just the start of it."

Protesters left this afternoon only after the Dean Diane Brand was escorted through the throng of people by security guards.

It was not clear when the libraries will close and the books would be moved.