Torrential rain in the Gisborne area overnight has damaged roads and bridges and cut off a township.

The Waipaoa River has flooded in areas, cutting off the small town of Te Karaka.

And hundreds of homes were without power from the East Coast to Hawke's Bay and Taranaki overnight as strong winds swept through the upper North Island. 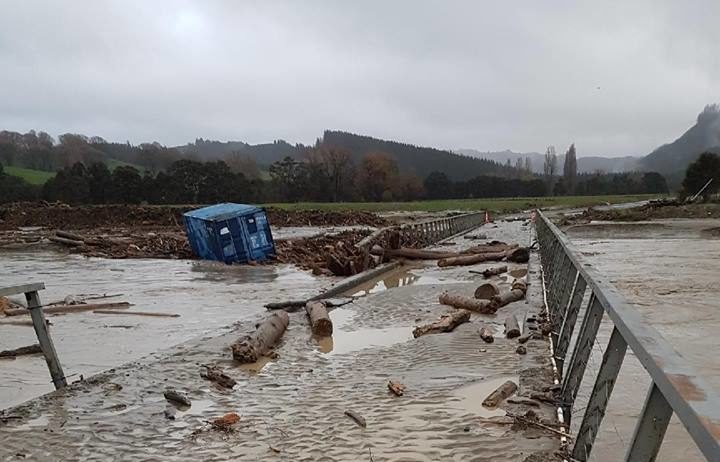 Logging debris hit a bridge on Tauwhareparae Road in the Tolaga Bay area that had been damaged in last week's flooding, when a huge volume of logs washed down rivers and into the harbour.

In the Gisborne area, a section of State Highway 2, near Te Karaka, was closed because of flooding from the Waipaoa River.

Ms Bennet said rural school buses had been advised not to run this morning, and people would need to ring schools to see if they were going to open.

RNZ reporter Anusha Bradley, in Tolaga Bay, said the Hikuwai River river peaked at 11m early this morning, and debris and logs were washing downstream. There was flooding on farmland and roads, she said. 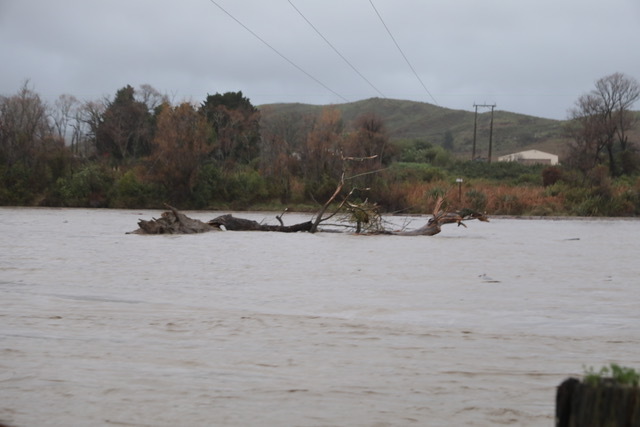 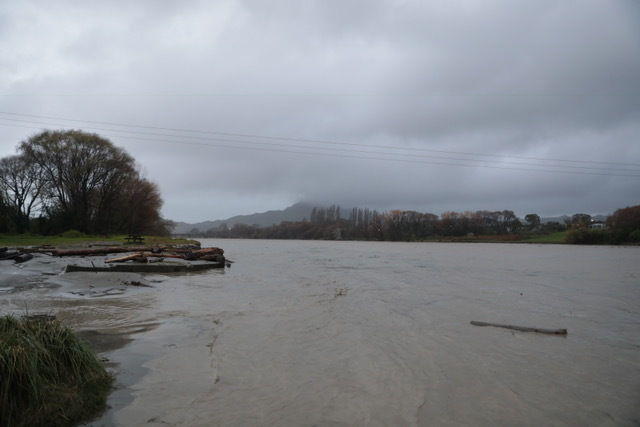 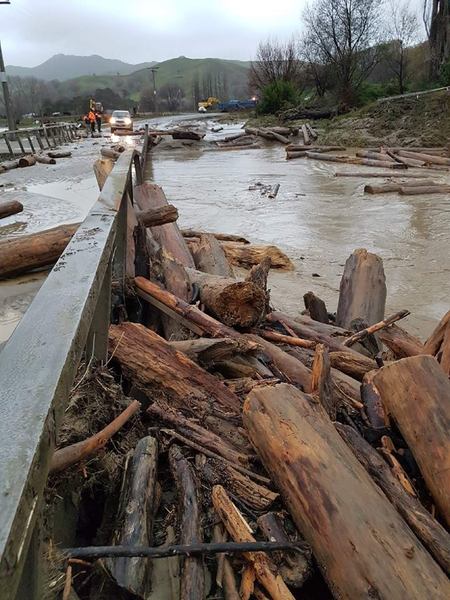 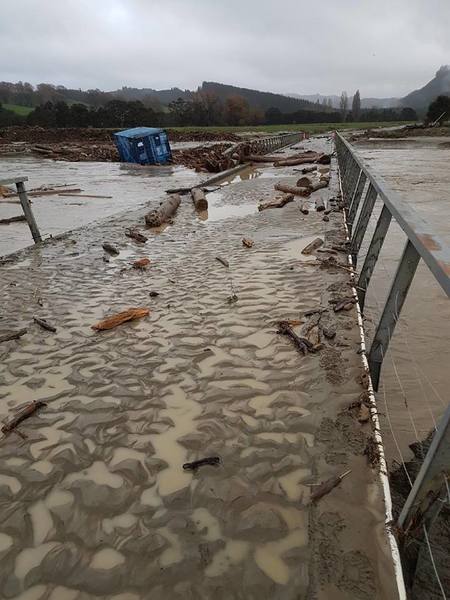 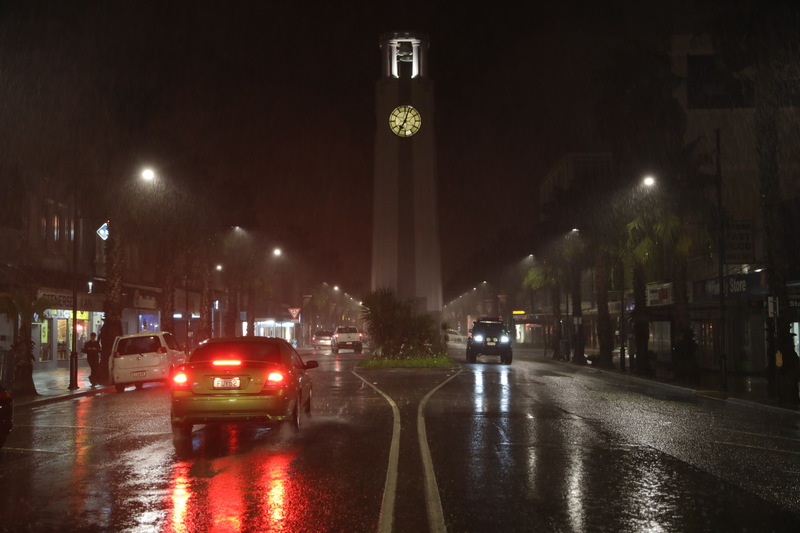 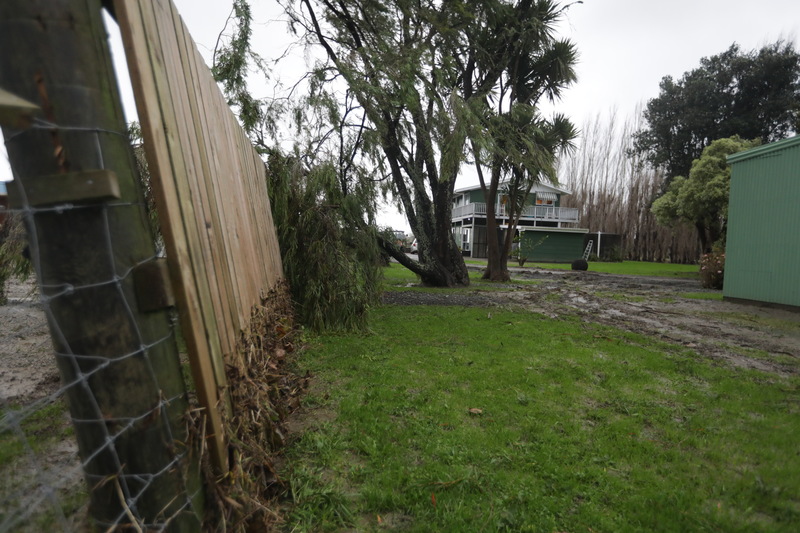 "We were out last night close on 1am and it was probably a metre from going over - it was rising 150mm ever ten or fifteen minutes - very scary actually.

"We were thinking 'here we go again' but it slowed right down ... but we're still on tenterhooks."

Mr Parker said the community wanted answers about the huge volume of forestry debris that blocked rivers and roads in last week's storm.

Gisborne's wastewater network flooded last night prompting the opening of the emergency sewer valves to prevent sewage from overflowing back into homes and onto roads. A house on Waimata Valley Road, in Gisborne, has been flooded.

There are slips the Napier-Taupo Road (SH5) and the Napier-Wairoa Road (SH2) and the Thames Coast Road, and drivers should expect delays.

The Ministry of Education said 15 schools and six early childhood centres were closed because of the weather, mostly in the Bay of Plenty and Waiariki region. 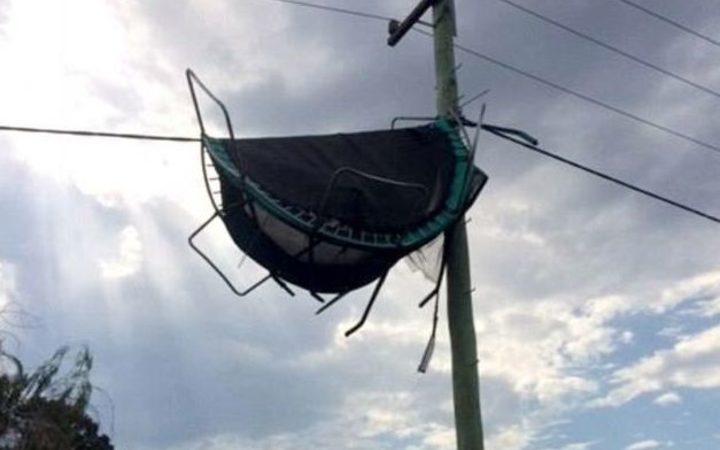 A trampoline caught in powerlines in Gisborne. Photo: Twitter / Rochelle

In Bay of Plenty and Hawke's Bay, power is being reconnected to many of the hundreds of properties cut off overnight.

In Napier and Hastings, some 900 properties had supplies cut off, more than 700 were cut off in and around Rotorua and more than 400 in Tauranga.

In Taranaki, about 2000 properties were blacked out overnight, and high winds led Air New Zealand to cancel three flights into New Plymouth airport this morning.

In the Gisborne region, 29 Tolaga Bay properties were without power, and further north in Te Araroa 128 properties had power cut last night after a trampoline blew into the lines.

Winds in the Bay of Plenty switching gale southeasterly to gale northeasterly around midday - 2pm as the low pressure makes landfall. The change in direction is likely to cause additional damage to trees, but care is advised right through to this evening when winds ease. ^TA pic.twitter.com/gDlJaWMZYT

MetService has said southeast winds might approach severe gales at times in exposed areas through until 11am.

A subtropical low pressure system - sitting to the north of Whakatāne earlier this morning - brought gusts peaking at 169 km/h to White Island.

Heavy rain warnings remain in place for Coromandel Peninsula, Bay of Plenty including Rotorua and the Kaimai Range, Gisborne, Hawke's Bay, the Tararua Range and the Kaikōura Ranges.

Damaging wind gusts were likely in Bay of Plenty including Rotorua, as well as Taupō and Taihape, Taranaki, Whanganui, Manawatū, Kāpiti-Horowhenua and Marlborough Sounds. 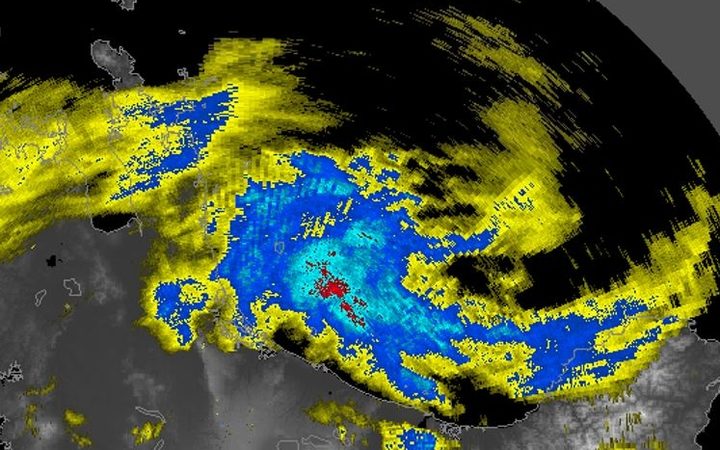 A subtropical low pressure system sitting to the north of Whakatane brought gusts peaking at 169 km/h to White Island this morning Photo: MetService