The decision to allow ironsands mining off the coast of South Taranaki is a world-first, groups who oppose the plan say. 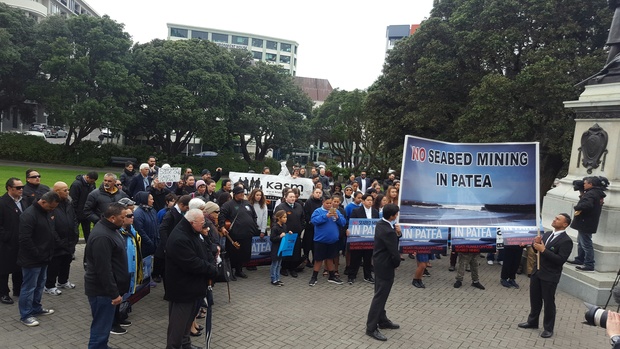 A protest against seabed mining in Taranaki headed to Parliament in September. Photo: RNZ / Chris Bramwell

Consent was approved by a decision-making committee (DCM) set up by the Environmental Protection Authority (EPA) last August.

The decision was met with staunch opposition by local iwi, environmental and fisheries groups.

Lawyer for Ngāti Ruanui and other appellants including fisheries groups Francis Cooke QC said as far as he knew the decision was the first of its kind.

"It's unprecedented activity - never been an act of this kind in New Zealand. As far as we are aware we're dealing with activity that has never before had permission to be undertaken, certainly in New Zealand and possibly internationally. "

The scheme was approved in a split decision after four months of hearings.

Consent was granted for mining to take place for 35 years - the maximum consent time available.

Mr Cooke argued the decision was inconsistent with the Exclusive Economic Zone and Continental Shelf (Environmental Effects) Act because the "bottom line" of the Act had not been interpreted correctly by the DMC.

"DMC never identified what the statute required and judged the application consistently with it."

"[The argument is] the effects will stop when mining ends. There will be significant adverse effects but they will not be permanent because after mining stops in 35 years the environment will be repaired."

"[The decision-making committee] appear to be applying a standard that allows the environment to be harmed, provided that it ultimately recovers."

This was inconsistent with the Act, he said.

Mr Cooke said the decision-making committee (DMC) acknowledged it was not clear how much environmental effect mining would have, as sediment created could spread out to a three km radius.

"Through reduction in light affecting primary production, and direct effects such as smothering. The plume may also instigate avoidance behaviour by fish in some locations... adversely affecting existing interests in commercial, recreational and customary fishing

He said even though the mining would not occur in the coastal marine area, located south-east to the mining site, the effects could still be "catastrophic", in the zone.

Mr Cooke said the DMC granted consent without a thorough enough understanding on what the adverse effects could be.

He also said it was wrong for DMC not to consider a previous decision where an application by the same company was declined in 2014.

"To say the previous decision was irrelevant goes to far."

He also said the DMC did not properly consider the interests of Maori.

Earlier the court heard lawyers argue that as the Environmental Protection Authority had oversight of the DCM, it should not have a say during the appeal.

The EPA said it had a right to be in court and to appeal any misinformation that may come up.

Justice Churchman said he would listen to all submissions and then make a decision on whether the EPA will be heard.

Other appellants including Forest and Bird and Greenpeace, as well as the mining company Trans Tasman Resources are still to give their submissions.

The hearing is expected to last until Thursday.