Big business planning to mine the seabed is getting an unfair advantage, Iwi and environmental groups fighting it say, criticising the Environmental Protection Agency and Department of Conservation hands-off approach. 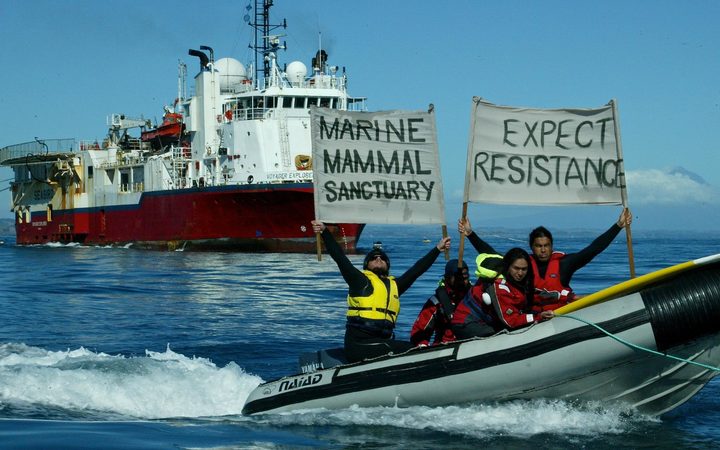 As of today's 5pm deadline, seven appeals have been lodged against the Environmental Protection Authority decision to allow Trans Tasman Resources to take millions of tonnes of iron sand from the South Taranaki Bight over a 35-year period.

One of two iwi to appeal, Te Kaahui o Rauru, deliberated long and hard about whether to go ahead, due to the cost of the four-year legal battle so far.

Its chairman, Marty Davis, said the trustees felt that as kaitiaki of the area, they had a moral obligation to continue the fight.

"Whilst seabed mining has been approved for Taranaki, it will spread quickly across the country unless it's stopped."

The appeal was one of "multiple actions" the iwi would take to stop seabed mining and protect the marine environment, Mr Davis said.

The seven groups appealing the decision are:

The iwi's chief executive, Anne-Marie Broughton said unlike under the Resource Management Act, there was no legal assistance for community groups to challenge EPA decisions.

"This closes down natural justice and puts all the cost on iwi and community groups - it's unfair and unjust and a deliberate strategy to disempower communities and support extractive industries. We should be very, very afraid," she said.

Te Kaahui o Rauru would be urgently petitioning the Attorney-General and Minister for the Environment to change the rules and allow them to access environmental legal aid in this case, she said.

"The playing field is not level. Big business is throwing huge money at this exploitive industry, and iwi and communities are fighting it without the input of the government department that's meant to stand up for conservation."

Several groups criticised the decision by DOC not to get involved.

DOC made a submission during the first hearing in 2014, which saw Trans Tasman's bid rejected, but decided against making a submission on the new application.

Officials told the authority that DOC had reviewed scientific advice and was "satisfied that TTRL's proposed conditions were appropriate and there would be 'no further conservation gains' by submitting".

The local conservation board made a submission against the plan, and also lodged its own appeal today.

Forest & Bird chief executive Kevin Hague said he was disappointed by the Department's "absence" on this and other issues.

"They have considerable expertise and we would love them to be alongside us in opposing this sort of extremely damaging activity," he said.

"I can only speculate as to why - the Act makes it clear that even in areas that are not public conservation land DOC has statutory responsibility to stand up for nature.

"It could be lack of resourcing or political direction that says DOC shouldn't be involved ... but on an objective basis, DOC ought to have been alongside us."

He said that in granting consent, the authority had failed to protect the environment, breaching its obligations under the Exclusive Economic Zone Act.

"I'm horrified that DOC didn't even submit ... DOC has almost ceased to become an advocate for conservation on many issues."

Ms Baxter said her group had filed an appeal against the decision based on 15 points of law, mainly to do with the lack of environmental safeguards required of the company.

The group was also challenging the authority's "failure to make public its rules around the chair's casting vote".

The authority's decision was split, with two votes each way, until the chair, Alick Shaw, cast a second vote, deciding the outcome.

"We've had thousands of messages, there's a huge amount of disbelief among the public that this was allowed to go ahead," Ms Baxter said.

Trans-Tasman Resources, which had a previous proposal knocked back by the EPA in 2014, said the project would create about 300 jobs directly and boost export earnings by about $400m.

The company did not return messages today, but executive chairman Alan Eggers previously acknowledged the seabed would be damaged, but stressed that it would be restored quickly.

The Department of Conservation declined to comment today, saying the matter was now before the court.