A small tornado has caused damage to a coastal suburb in New Plymouth, while tens of thousands of Aucklanders face another cold night without power.

Taranaki Civil Defence says the tornado hit Strandon at about 7pm, as the country continues to feel the effects of this week's autumn storm.

It caused damage to a house window, door, fences and trees fell onto roads.

Civil Defence is advising residents to be careful and only travel if necessary. 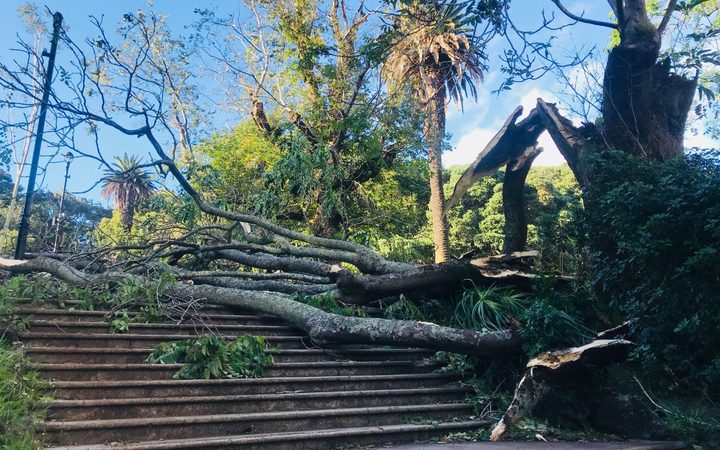 A tree downed by the weather in Albert Park. Photo: Andrew Patterson

Further north, Auckland Civil Defence has warning people in the west of the city there could be more damaging wind gusts tonight.

MetService has forecast more wind and rain from 8pm tonight. It said there could be gust up to 120 kilometres an hour or tornadoes at about 10pm.

Auckland Civil Defence said the severe weather was more likely to hit the west, particularly the West Coast beaches, than the central and eastern parts of the city.

It also said it was hearing anecdotal reports of a small number of houses without working toilets, because of the power outage.

Those affected would be houses with waste water tanks that needed electricity to run.

It did not know how many people might be in that situation, but it wanted those affected to get in touch.

Civil Defence would take their details and get a portaloo and drinking water to them tomorrow.

The effect of this week's wild weather has been felt throughout the city, with those living in rural areas having to work around no running water.

Erin Hales, who lives in Piha, said she and her husband have been taking showers at gyms and filling up bottles of water to keep them going.

She said residents in the rural area felt like they had been shoved to one side and she would have thought they would be more of a priority.

"Unlike main supply water houses...we can't wash hands, we can't wash ourselves, our dishes, our children and that is a health issue," she said.

Ms Hale said when there had been power cuts in the past, Vector brought in generators.

But that hasn't happened this time and Ms Hale said there had been no communication about why.

She said she had been told power was only going to back on at midday tomorrow and with another rough night forecasted for those on the west coast, Ms Hale was worried.

But even for those who do have running water, it has been a struggle.

Kasha Klee and her young family had been without power since 11am on Tuesday, when the first wave of bad weather hit.

She said the lights started flickering as the trees swayed into the power poles.

"I called Vector to report what was happening and they said they would send some arborists...to cut down the trees and then an hour later the power went off and it's been off since," said Ms Klee.

It had been difficult not having the means to keep her kids warm, she said.

She was grateful that her neighbours offered extension cords and multiplugs for them to keep their fridge and also a few necessities running.

But Ms Klee said the response from Vector had been disappointing.

She said when she phoned the company, she was put on hold for an hour, only to reach a standard response that they were only taking emergency calls.

Then she was hung up on.

"Everything that I seem to go to - their website or their app - is out or hasn't been updated for many hours," she said.

Ms Klee has been told they would have power back soon, but with no solid timeline, it is hard for them to make plans.

Vector spokesperson Minoru Fredericksens said there are separate phone numbers for emergencies and non urgent calls so no one should be getting hung up on.

But he said people phoning will need to be patient.

"Unfortunately it's a huge volume [of calls], given the number of outages and the size of the storm so we do apologise for that," he said.

"But when you've got that many people, unfortunately queues will get quite long."

Mr Fredericksens said Vector had not given generators to any residents in Auckland.

"I feel for the people of Piha but there are also tens of thousands of other people who'd also like generation so how do you make that distinction," he said.

The number of properties without power in Auckland now stands at just over 25,000.

Vector crews are still working to fix more than 600 faults, power outages and reports of damage on the network.

'Unprecedented damage to the network'

Meanwhile, rural lines company Counties Power said the damage done to its network by this week's storm was unprecedented.

The company services about 40,000 properties south of Auckland, from the Manukau Heads and Papakura south to Waikaretu.

The 200-kilometre per hour wind gusts felled eight power poles and damaged more than 50 lines, cutting power to 14,600 properties - a third of its customers.

Counties Power said the damage was far worse than from January's storm, and has caused the most outages in its history. 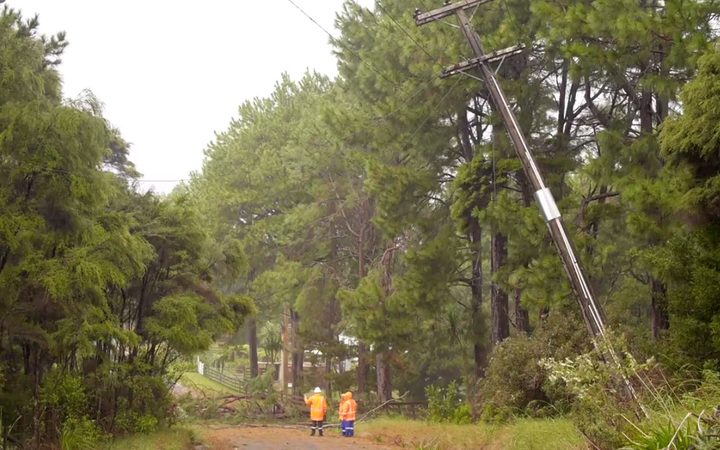 Power poles were brought down around the Auckland area by the strong winds. Photo: Vector

Internet and phone network provider Chorus has also been impacted by the outages and said it was still trying to get phone and broadband services back up and running.

The company said the majority of the issues had been caused by power outages in Auckland and some Chorus sites have been run on battery back-up systems or generators.

But because of the length of time power has been out in some areas, some of the back-up batteries had gone flat.

Chorus said it is working closely with service partners, Vector and Counties Power to prioritise restoration.

Vector said power should be be restored to 80 percent of the properties in the following suburbs by midnight tonight. But if the power is not restored by that time, Vector said it could still be days before the lights are back on:

Anybody with the power out in these areas will be waiting until at least the end of tomorrow before power returns:

Seven schools and three early learning centres in Auckland, Waikato and Wellington are closed as a result of the stormy weather that has hit the country over the past two days.