A large-scale contamination investigation in New Zealand is relying on a test that fails to detect a whole host of firefighting foam chemicals. 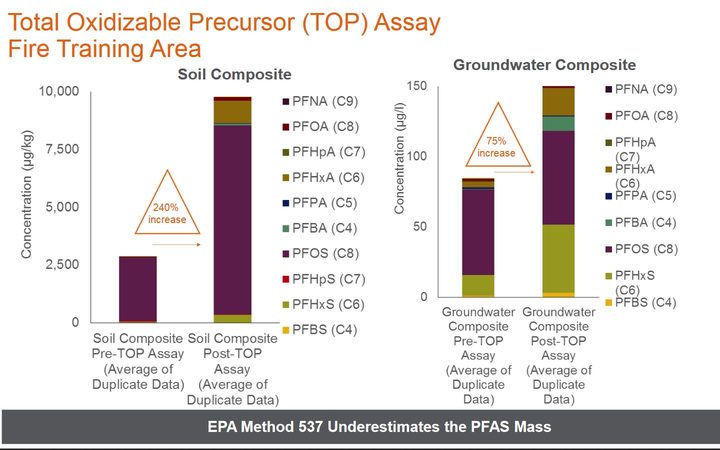 A chart shows the increase in chemicals found in soil and water samples, between what standard analysis finds on its own, compared to what it picks up after the sample’s ‘boiled down’ via the TOP Assay method. Photo: Source: Arcadis

The level of contamination and the geographical spread of a harmful class of chemicals in New Zealand is being investigated by authorities.

Testing has been carried out at military bases, airports and a housing development in Auckland but scientists in the UK and Australia have told RNZ the standard test in use in New Zealand "does not begin to address the scale of the contamination problem" people have been exposed to.

UK chemist Roger Klein said they were "only detecting the tip of the iceberg".

New Zealand "might well" have to go back and do its testing of contamination sites again if it had not been using the new method, he said.

The Defence Force so far has not said if it was using the new method.

"The difference ... can often be anything between 10 and 100-fold more fluorochemical discovered," he said.

The Environment Ministry said the Defence Force was not using the new test because, while it detected a broader range of harmful chemicals, the results could not be compared to drinking water standards.

The new test used an oxidation process that meant individual chemicals could not be identified, it said.

However, scientific literature makes clear the new test is in addition to, not in place of, the standard analysis.

The standard analysis, or a variant of it, was one used by the US Environmental Protection Agency and what most Australian states are using, the Environment Ministry said .

The Defence Force has made no comment on what it knew about the new test before it undertook mass testing in New Zealand. RNZ first asked it about this 12 days ago. 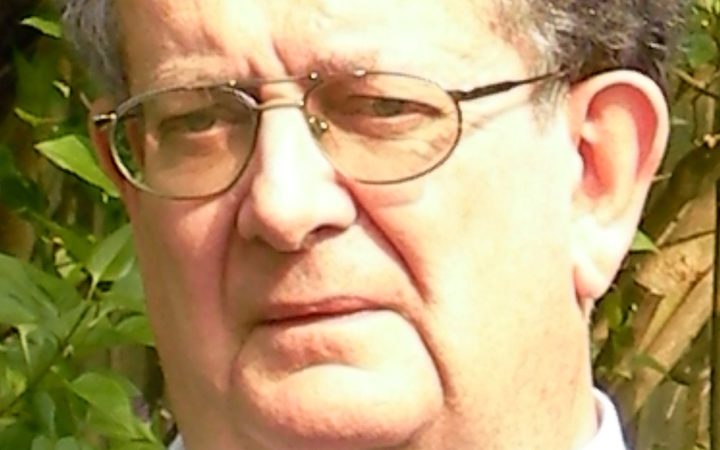 The Fire Service is now testing in the vicinity of its training grounds, and local councils have been told to investigate too in case factories and the like have discharged any of the wider class of PFAS chemicals into the environment.

The chemicals last a very long time, accumulate in the body, and are raising more and more environmental and health concerns worldwide.

Testing of groundwater for two now-banned foam chemicals, PFOS and PFOA, is underway in Auckland at Devonport and Whenuapai, Manawatu, Rangitikei, Marlborough and Canterbury.

It has been confirmed at above-safe levels in seven properties' drinking water around Ohakea airbase.

Some airports have been using foam illegally 12 years after the ban.

The Defence Force refused to say whether it was using the all-inclusive/wider method and refused to answer RNZ's yes-or-no question for 10 days.

The lab that is doing all the testing of water for foam chemicals for Defence, AsureQuality, said it did not do this new test.

There is no other accredited lab in the country for these chemicals.

The Defence Force refused to say whether it was using the all-inclusive/wider method and refused to answer RNZ's yes-or-no question for 10 days.

The lab that is doing all the testing of water for foam chemicals for Defence, AsureQuality, said it did not do this new test.

There is no other accredited lab in the country for these chemicals.

Standard testing targets just 30 or so PFAS chemicals, but there are hundreds of others in foam, including some that convert into PFOA over time.

The wider testing regime boils a sample down so that standard testing can pick up the many "hidden" fluorochemicals.

If Defence were only doing standard testing it would be "totally inadequate", Dr Klein said.

Four other scientists in the UK and Australia backed what he told RNZ, and there are numerous science journal and other articles supporting it.

"The [wider test] is a useful tool in exposing the potential for ongoing contamination by PFAS compounds," leading Australian lab ALS says.

After a big foam spill by Qantas in Brisbane last year, standard testing at one site found 946 units of total PFAS; the new test method at the same spot found 34,500.

Fire and Emergency, which oversees all the fire brigades, ran tests on its fluorine-containing foams last year.

However, though it said it knew the new test would detect many more PFAS chemicals in those foams, it did not use the method.

"There is no requirement for [wider] testing to be carried out here as we understand it," the fire agency said.

"We are aware that our foams may contain other fluorinated compounds that are not detected by the standard analysis so may consider further testing in due course."

A Queensland expert, who RNZ agreed not to name, said the new test was "the most significant advance in the field for revealing the true extent" of PFAS contamination.

However, a US expert, who RNZ has also agreed not to name, was more cautious, saying the test method only provided estimates of PFAS contamination.

Queensland has insisted on it since 2016. New Zealand's standard tests would, on their own, be rejected there.

Australia is conducting its largest-ever environmental investigation over the foam contaminants, spanning military bases, airports and petrochemical sites and the neighbourhoods around them.

Its Defence Force does not normally use the new TOPA test.

"There are uncertainties within the unstandardised analysis process and results interpretation, including laboratory results ... being highly variable," it said in a statement.

The new test could be useful for showing a contamination profile for the environment.

Both the NZ Defence Force and Fire and Emergency in this country have repeatedly said they were working closely with international counterparts, especially the Australians, on their response to the contamination.

The PFAS chemicals are forecast to be a growing headache for many, many years to come.

In the US, 3M, which got out of foam making when its PFOS research showed health problems in animals, has just made a billion-dollar settlement over PFAS chemicals in a single US state, Minnesota. Dupont reached a $700-million-plus PFAS settlement last year in some states.

The vast number of PFAS are being supplemented all the time by new ones; for instance, when 3M stopped making PFOS around the year 2000, it simply substituted it for another PFAS chemical.

It was impossible to keep track, Dr Klein said.

The new test method encountered resistance from industry and officials, Dr Klein said, which he put down to a reluctance to face up to the high cost of testing and fixing-up sites.

Defence Department officials in countries other than New Zealand had told him and other experts "we didn't know what we were talking about".

At seminars for those dealing with foam contamination, it was common for people not to know much about it, he said.

Emails just released under the OIA show a senior environmental officer at the NZDF expressed surprise that PFOS and PFOA were banned.

Another document shows the Ohakea airbase commander told local people at a meeting that the contaminant chemicals "doesn't stick to the soil" when in fact they do.