Some groundwater at Devonport Naval Base has 50 to 100 times more firefighting foam contamination than the recommended maximum, according to test results released to RNZ under the Official Information Act. 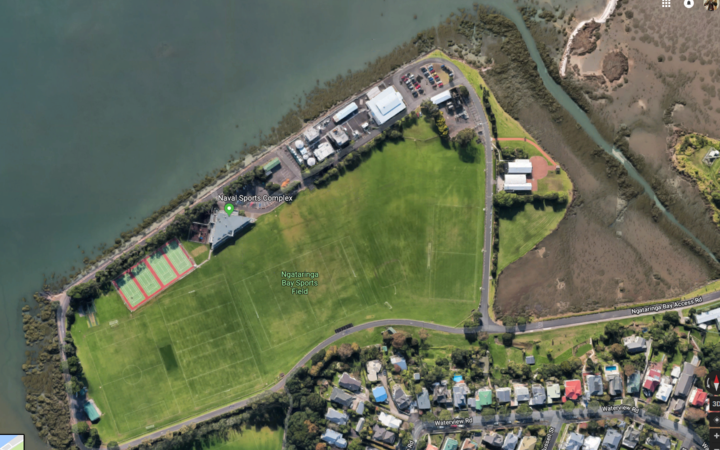 An aerial photo of the Navy's Sea Safety Training Squadron beside mudflats and mangroves at Devonport's Ngataringa Bay. The source of the foam contamination is thought to be the large square white building next to the parked cars. Photo: Supplied / Google

The highest single result was from October 2016 at Monitoring Well Three, at 14,000 times above the maximum recommended for recreational water use.

"Our expert advisors have concluded that it was likely this sample was cross-contaminated," the Defence Force said in a statement.

"This issue highlights the need to consider more than a single reading when drawing conclusions, which is why we are doing multiple rounds of testing," the statement said.

See the test results that were released here (PDF, 148.1KB):

An April 2017 test of the same well found 85 micrograms per litre of water - still 120 times the recommended maximum of 0.7 micrograms.

"After dilution, PFAS concentration was not expected to exceed the relevant guidelines in the waters of Ngataringa Bay," the Defence Force said.

PFAS (or Per- and poly-fluoroalkyl substances) is a class of manmade, long-lasting, toxic chemicals that accumulate in the body, and which include the now-banned firefighting foam chemicals PFOS and PFOA.

Drinking water guidelines have a maximum that is 10 times lower than for recreational water.

However, the Defence Force has insisted no drinking water at Devonport or its Papakura base is affected.

"Drinking water is not affected at the Auckland sites as all drinking water is sourced from the region's urban water supply network," the council said in its first internal briefing on the contamination on Friday.

Preliminary tests are ongoing at Whenuapai, where Auckland city councillor Wayne Walker has expressed concern some local people may be drinking from contaminated bores outside the airbase.

The Auckland Council only learned of the groundwater contamination last week after RNZ reported on it, but has refused a request for an interview.

At Devonport, all the other tests across five monitoring wells at the naval training base alongside Ngataringa Bay show contamination at 50 to 115 times the recommended maximum limits.

"... the concentration in sub-surface groundwater at isolated spots ... does not relate directly to concentration in any body of water (marine or freshwater) to which the public may be exposed," said the Defence Force.

Test results were low for the mangroves and mudflats adjacent to the Sea Safety Training Squadron - between 0.5 and 109 micrograms per kilogram when the US standard is 6000.

"We therefore do not believe there is significant cause for concern about PFAS on the mudflats or in the waters of the bay," Defence said, adding limited testing of the bay's tidal area begins this week.

Auckland Council wants to be informed of test results

The Auckland Council has now asked to be kept informed about results from the next round of testing "as a priority".

"If the council became concerned about the timeliness or quality of the investigation and analysis then it could initiate its own investigation programme," it said.

The Defence Force did not answer RNZ's questions about why Whenuapai has not been given priority alongside Ohakea and Woodbourne, where foam chemicals are in at least seven properties' drinking water.

Most of the stormwater in the area flowed straight into the ground, Cr Walker said.

The other big concern was risk to the upper Waitemata Harbour, his fellow Albany ward councillor John Watson said.

The research paper showed there were more than 500 bores in the area. It remains unclear if any are used for drinking water.

At Woodbourne, near Blenheim, the Defence Force had said all the drinking water was clear, but after OIA information contradicting that came to light last week, it now says a well "little used since September 2016" tested above health guidelines in late 2017, though it had tested clear in 2015.

"We are trying to establish the possible reasons for this anomaly," it said.

Other discrepancies revealed in OIA responses relate to when Defence twigged it might have a problem with foam contamination, which firefighters and the Defence Force in Australia had been warned about back in 2003, and many times since.

"Environmental Services did not receive information from overseas contacts," Defence told RNZ in a statement.

"In November 2014 local (NZ-based) consultants raised the issue and we responded by including PFAS in the analysis suite for samples taken as part of a routine contaminated site investigation."

Environmental Services approved expenditure for this, it said, and by mid-2015 once the first Ohakea test results were back "a decision was made to continue targeted investigation of PFAS compounds".

The Environmental Protection Authority has refused to tell RNZ which other airports it is investigating, apart from saying all those with their own fire crew are under scrutiny.

"As a matter of fairness and good investigative practice, the EPA isn't commenting on such issues while the investigation is ongoing," the Authority said.