The Anglican and Catholic churches are making their most concentrated push yet to get the Royal Commission into abuse expanded to fully include them, with both writing to the Prime Minister. 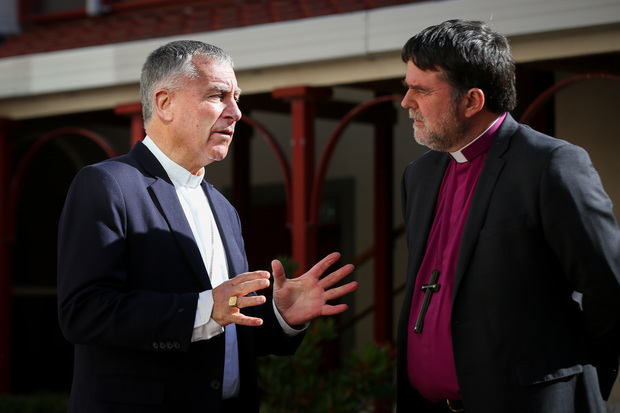 Draft terms of the inquiry exclude scrutiny of institutions where abuse in churches or other groups had no state involvement.

But a letter sent to the Prime Minister, chair of the commission and children's minister, which is signed by Catholic Bishop Patrick Dunn and Sister Katrina Fabish, supports the inquiry and wants the terms to include church institutions.

"We are of the firm view that no individual should be denied the possibility of making a submission to this Government inquiry. It would be wrong if some individuals felt excluded from this process simply because their path of referral to an institution was different from someone else's," a statement reads.

In addition, the Anglican church's general synod committee has also written to the Prime Minister and other officials asking for its churches and agencies to be included in the inquiry.

The letter is signed by Archbishops Philip Richardson and Winston Halapua on behalf of the General Synod Standing Committee, which met earlier this month.

In a statement, the committee said: "We are concerned that it will be unhelpful to victims and survivors, if the inquiry and its process is limited only to the state sector, denying some the right to have their voices heard.

"Our Christian faith teaches us the power of truth, justice and reconciliation. We see this Commission of Inquiry as one way we can put that faith into action, and we encourage you to give this request serious consideration, in the hope that this will provide a pathway to healing and wholeness for all concerned."

"The Anglican Church needs to collaborate fully with the Royal Commission and we need the terms of reference to be extended in a way that allows that to be possible," Archbishop Philip Richardson said.

Some leading non-clerical Catholic voices have previously called for such an expansion - but now their top clergy are getting vocal too.

"We are saying that if they are going to move on to a stage of investigating institutions ... then we would welcome having church institutions also included so that we too can learn from whatever failings might have occurred in the past," Bishop Patrick Dunn, who heads the Catholic Bishops' Conference, said.

The inquiry's draft terms exclude scrutiny of abuse in institutions in cases where the state had no involvement.

So the case of a child sent into church care by the state would be treated differently to a child sent to, say, a Catholic school by their parents and abused there.

The government's made its preference clear - even down to the email address of the inquiry: royalcommission.statecare@dia.govt.nz.

However, Prime Minister Jacinda Ardern, despite giving repeated interviews expressing this preference, has not said exactly why non-state agencies could not be included.

Survivors of sexual abuse by priests have been campaigning for an expansion, with some saying they would refuse to give their story to any Royal Commission that did not hold the institution to account in their case.

The Australian inquiry into child sex abuse heard 1100 complaints of abuse had been made against the Anglican Church from 1980 to 2015, and four times that against the Catholics.

"Certainly the Australian example is very salutary but we would have taken exactly the same position whether the Australian inquiry had been held or not," Archbishop Richardson said.

As for other Christian churches, the consensus seems to be they all wanted to be scrutinised by the Royal Commission here, he said.

He was asking to meet Children's Minister Tracey Martin, but is clearly keen to leave the government room to move.

"If the terms of reference are not extended, how can the church's accountability be reflected? And we want to have those conversations with the [political] ministers ... we're really not sure what that might look like."

The original whistleblower into Catholic clerical child abuse, US priest Tom Doyle, has said it would unheard of to try to have a second, separate inquiry into abuse in churches.

A Royal Commission spokesperson said Sir Anand had met the churchmen, was meeting a wide range of people and was not commenting on the content of any submissions.

She did not say if the public consultation on the draft terms of reference would be extended beyond the end of April or not.