Ground up insects, animal bile and bit of bones - also known as E numbers 120, 1000 and 542 - are just some of the ingredients vegans are constantly checking food labels for. 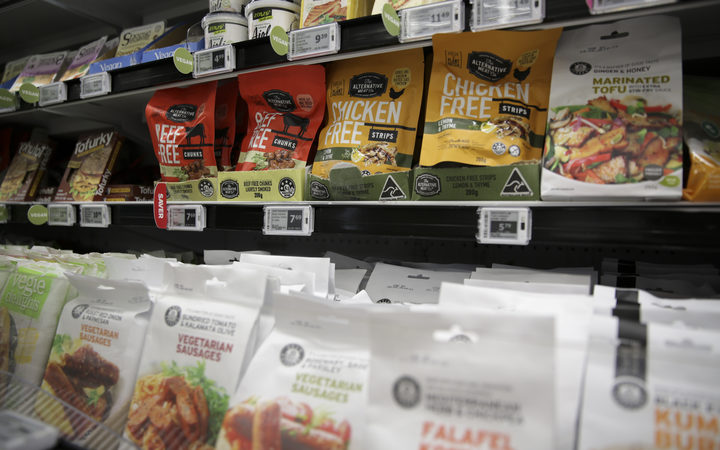 Vegans and vegetarians are working together to have a vegan tick of approval up and running within the next few months. Photo: RNZ / Richard Tindiller

But they are hoping all that will end soon with launch of a vegan tick of approval later this year.

The New Zealand Vegetarian Society said apart from the Fair Trading Act, there was no regulation around the marketing of vegan products - and a society-approved label would take the guesswork out of shopping.

"At the moment it's purely a voluntary thing and people will put labels saying they're vegan or vegetarian friendly but it's taking them at their word and we've come across a lot of incidences where they've been incorrect," its national manager Stephanie Lane said.

"Because there's so many hidden ingredients and flavourings and that sort of thing - even a basic bag of chips is not always vegetarian or vegan."

Colmar Brunton's 2017 Better Futures Report shows just over a quarter of New Zealanders now identify as vegetarian or vegan some, most or all of the time - a 7 percent increase since 2014.

Vegan Society president Amanda Sorrenson said even if people did not identify as vegan, there was a massive consumer shift happening and people were thinking more carefully about the products they bought.

"Consumers are seeking transparency and I think the more clever companies will step up and provide that - we had a lot of companies approach us, asking to be certified, so that is what set this into motion."

Ms Lane said the New Zealand Vegetarian Society, which already runs a vegetarian approval label, was working towards introducing a New Zealand-based 'vegan certified' label, with the support of the Vegan Society.

"In the vegan community, they're really excited to have something that will prove to them that what they're eating is really vegan.

"At the moment it's quite hard to tell from the label - in fact you can't - because some of the e-numbers and other ingredients - you just can't tell unless you go as far back as the manufacturer."

The Commerce Commission says they've had eight complaints in the past five years relating to misleading vegetarian or vegan claims.

Ms Lane said businesses would need to pay to become accredited but a rigourous auditing process was important as it was common for animal products to end up in goods that the manufacturer thought were vegan - and had marketed as such.

"It's quite good for manufacturers and producers to go through the process because they actually learn a lot about their own product," she said.

Founder and director Fernanda da Silva Tatley approached the Vegetarian Society to get accredited, after developing a range she thought was vegan-friendly.

But, a face cleanser caught her out - it contained alcohol that had been treated with animal by-products.

Ms da Silva Tatley said changing her product meant it was off the shelf for an extra four weeks, but she was now confident of its vegan status.

The Ministry for Primary Industries said societies did not have to register with the government to provide their approval of vegetarian and vegan products, but they do need to be aware of their obligations under the Fair Trading Act.

The approval logo is still going through the trademark process but the Society expects it to be launched by August this year.