Marahau locals are calling for the hills above to no longer be used for forestry as the town recovers from debris and huge logs being swept into the town by Cyclone Gita. 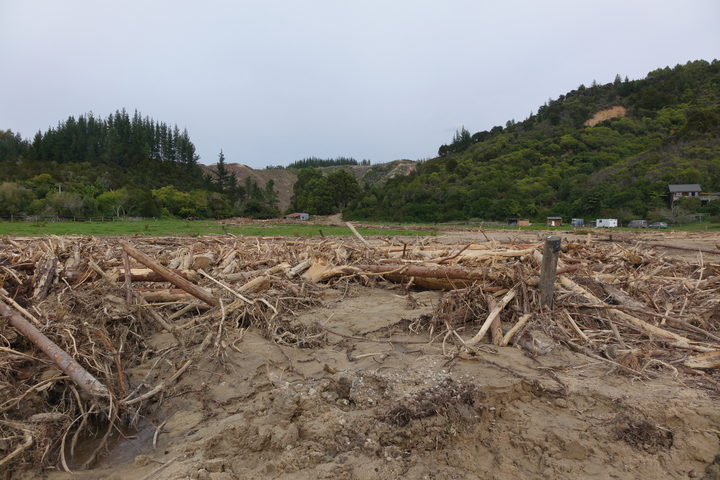 Debris from the storm across the area near Marahau. Photo: RNZ / Tracy Neal

The southern gateway to Abel Tasman National Park, Marahau was hit by the avalanche of forestry debris after Gita brought rainfalls some said reached 200mm in three hours.

Some of the slips included stands of native trees which slid from the hills. Locals said it was a miracle no one was killed.

A week on, the mud is beginning to stink. 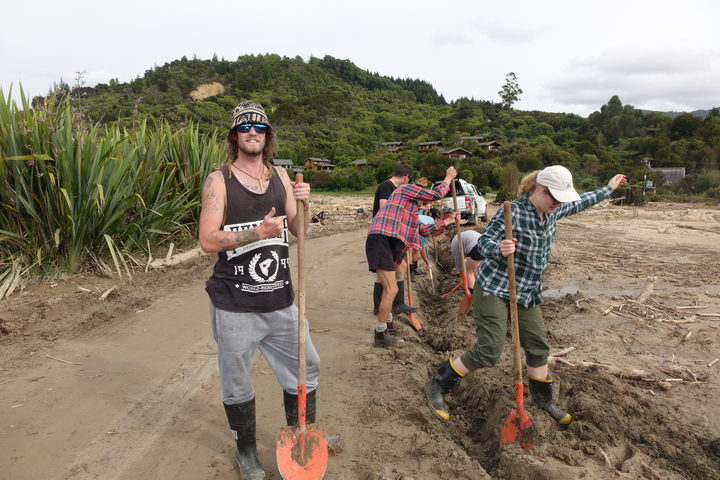 A gang of trainee rangers from the Nelson Marlborough Institute of Technology was busy yesterday shovelling silt and debris from a long driveway.

Along the road at Old MacDonalds Farm and Holiday Park, chickens were happily exploring their new mud floor while staff cleared out flood-damaged amenity blocks.

Phil Reed volunteered to help, even though boulders and trees smashed past his own home in nearby Sandy Bay. 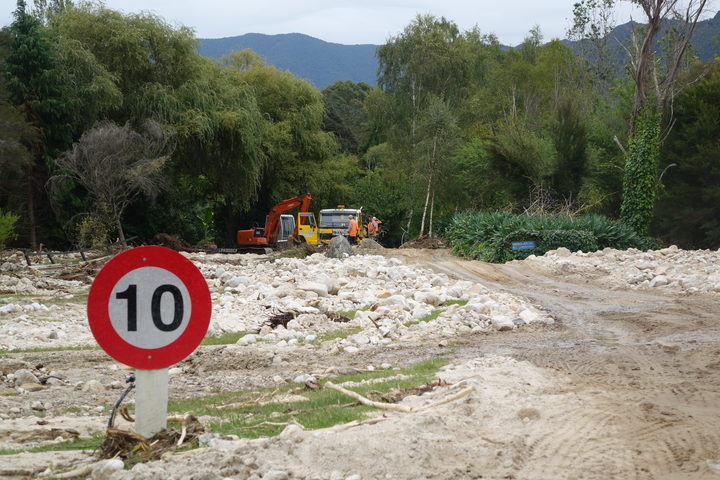 "It was like a huge moving gully of black water. Trees were breaking, the rocks were smashing together and as they went past my house I was pretty freaked out. I was trapped - I didn't know what to do."

Despite the fact his fences were all smashed and his sheep have vanished, he was among the community of helpers willing to help out others he considered worse off.

"My God, the silt and the mud, and of course you can't do anything until it dries out because it's just like chocolate sauce, only smellier.

"It's been a big effort from a whole lot of the community - family, friends, even some of the bach owners arrived with shovels. It's been incredible." 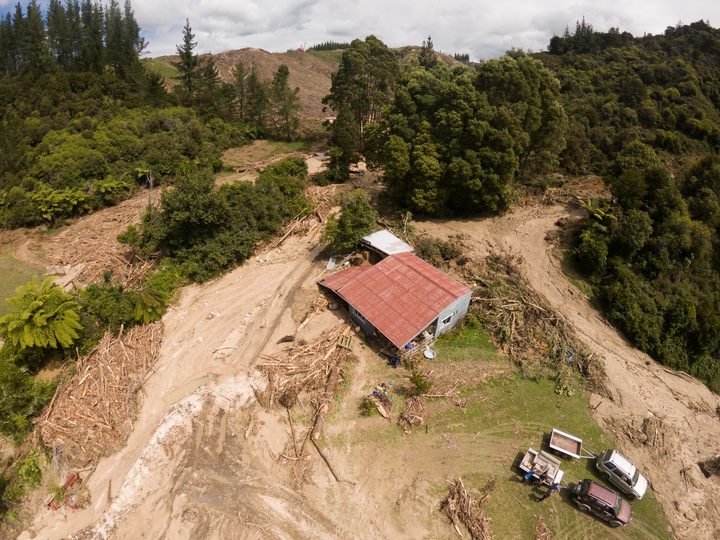 Just five minutes down the road, tourists packed out the cafes and booked kayak trips into the Abel Tasman National Park, but further inland, the boats were hull-deep in mud, after a tsunami of debris swept down the hills and creeks of the Marahau Valley.

For Merv Hall, who lives at the Marahau Valley Farm Community - a sanctuary he sought after the Christchurch earthquakes, the sight of a digger chewing through the bamboo around his home, was almost too much. 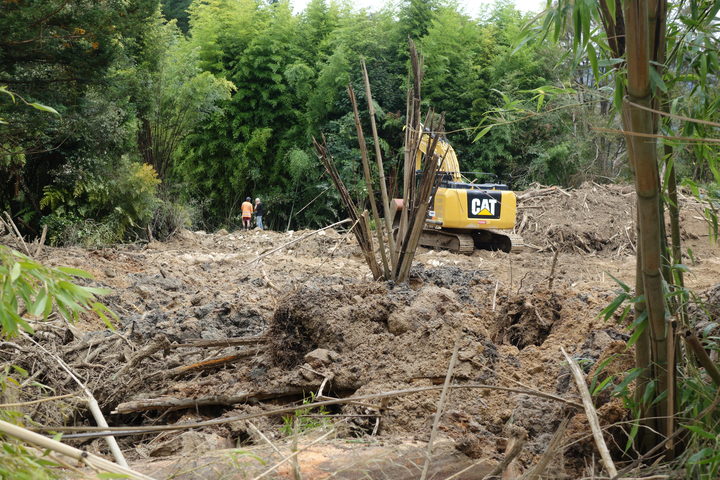 At the height of the storm he said those living on the patch of iwi-owned land they call paradise, were at the mercy of torrents of logs, water and mud. While there was no way out then, many have since fled.

Mr Hall pointed to a stream which last week he said was a violent river. A collection of large logs now lie tossed across the banks of the stream.

"When the tidal waves came through the log-jams would release and we'd get these waves of water that would have been six, seven even eight metres high." 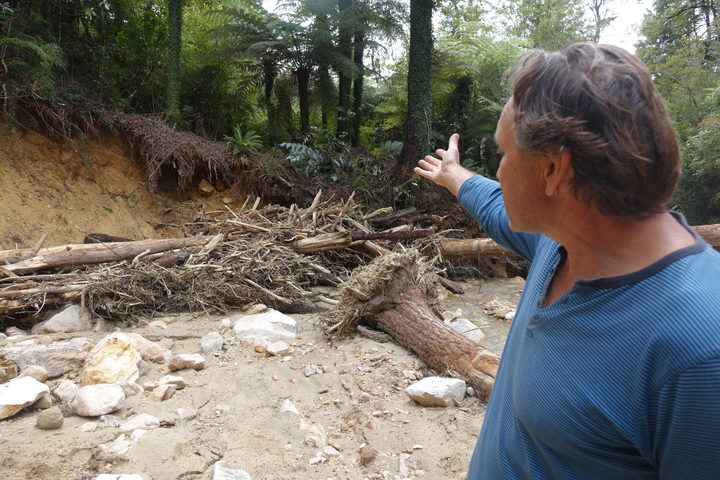 Mr Hall said the community has not yet tallied up the scale of the damage - the worst in the farm's 46 years.

He said the area on which the farm is located is sacred to the residents, and the iwi owners which lease it to the community. 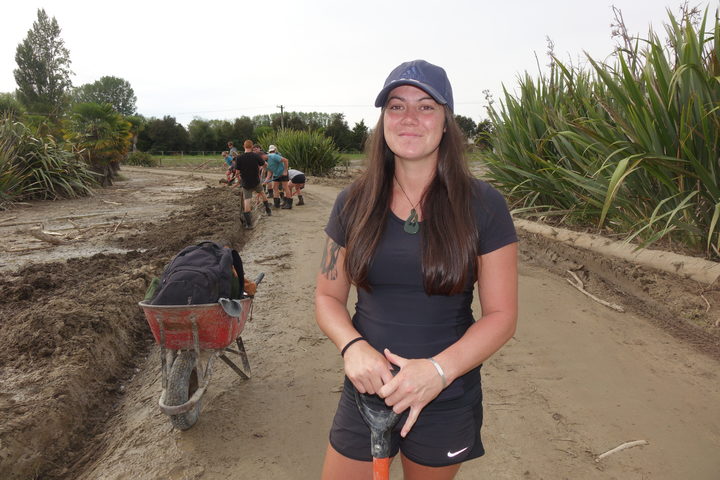 Studeny Kristiane Ellery volunteered to help dig homes out of the mud. She says it's a tough job, and not just physically. Photo: RNZ / Tracy Neal

"This area in here is native bush which is covenanted. It's never been milled or touched, and both ourselves and Wakatu treasure this land. We really do, but we're under threat from the milling of forestry above."

"What we need ... the Separation Point granite hills around here ... are never planted in forestry again. It is just not a sustainable activity in these areas."

Tasman Forest Management manages the Marahau plantations on behalf of a combination of owners, including a Chinese state-owned entity CNBN Forest products, and local iwi. 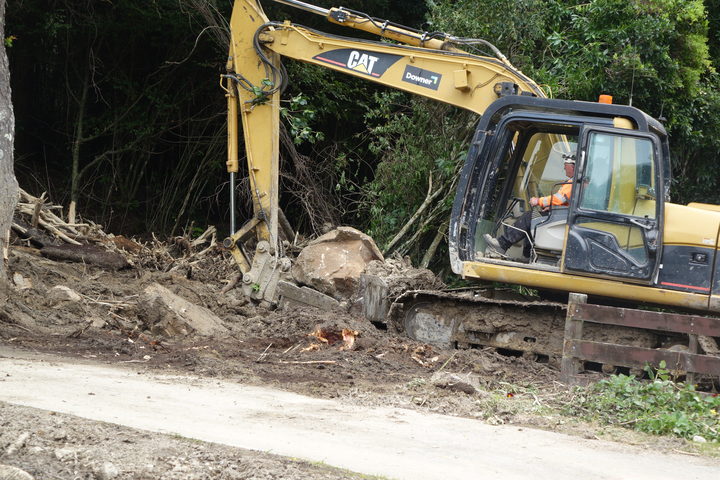 Director Craig McMiken said what happened was a disaster, and while they had operated by the book, unprecedented rain from the cyclone last week caught them out.

"We've had a number of mid-slope failures which have caused debris flows and some have impacted on neighbouring properties. It's a combination of logging slash, debris, and there are some standing trees that have come down in slips."

He said the company had brought in heavy machinery to help clean debris from at least nine properties.

Mr McMiken said it had forced a re-think about their planting plans. 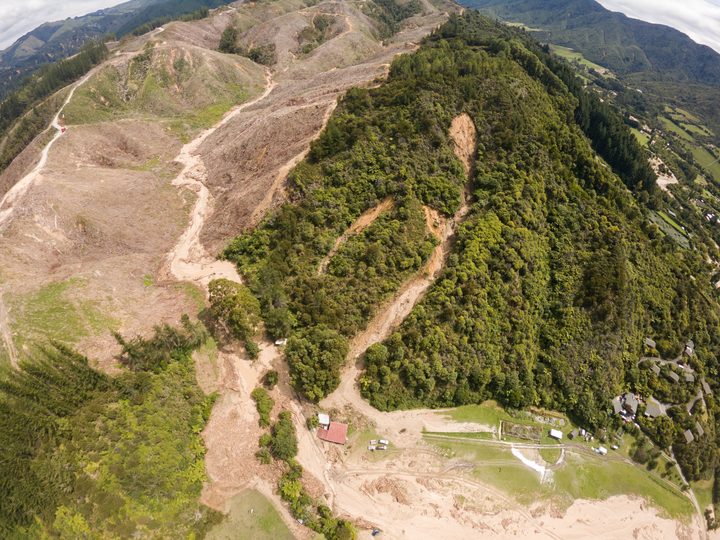 "The plan for that area was for it to be replanted but we are assessing areas which aren't suitable for replanting. The impacts of this storm mean we will have another review of that."

The deputy mayor of the Tasman district, Tim King, said new environmental standards for plantation forestry that come into effect in May would force better practises. The new regulations include new tools for managing the environmental impacts from forestry, including erosion issues.

But Mr King said they might not go far enough. 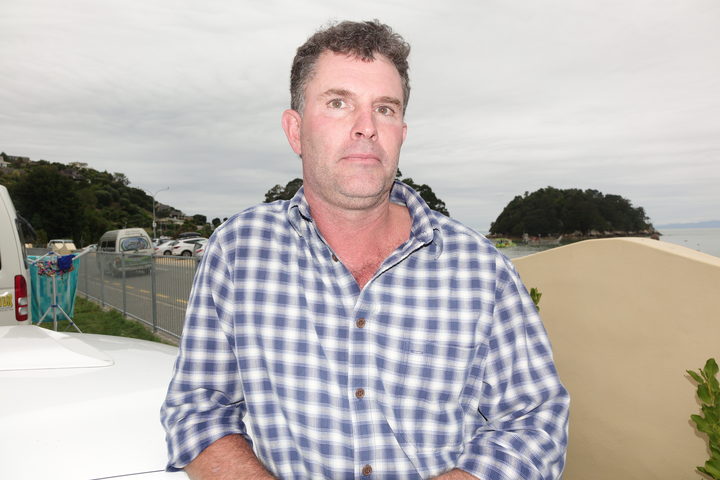 "There are going to be tougher rules around a number of things, however I wouldn't think that even those rules in these sort of events are going to prevent some of the damage that's been created."

Public meetings on the recovery effort are to be held in Riwaka and Marahau this evening.