The storm battering the centre of the country has seriously disrupted travel for thousands of airline pasengers. 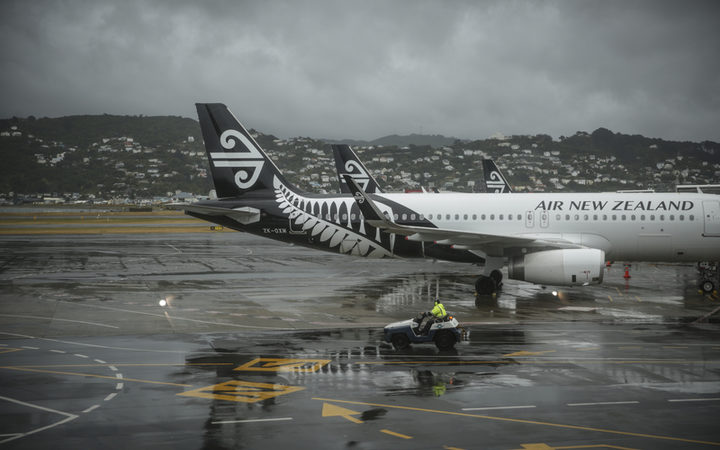 All flights at Wellington Airport will be grounded this afternoon. Photo: RNZ / Rebekah Parsons-King

It said it was putting on extra flights earlier to make up for any difficulties in Wellington later, and was relaxing its financial penalties for some people trying to reschedule bookings.

Conditions at Blenheim, Kāpiti Coast and Palmerston North airports were being closely monitored but flights there would continue for now, it said.

People with bookings were advised to check the website to see if they were affected. The airline's call centres were very busy, it said, urging passengers to avoid calling unless their travel concerns were urgent.

However, Jetstar is still operating according to schedule in the capital.

Air New Zealand has not yet explained why it has cancelled flights.

Dozens of flights have also been cancelled in Christchurch; however both Jetstar and Air New Zealand say they can still fly into and out of the city, and will continue operating according to schedule as long as they can.

More roads have been closed in the South Island and the Transport Agency is telling people to delay all travel if possible.

State Highway 73 Arthur's Pass has been closed on the West Coast side because of strong winds and falling trees.

State Highway Six from Hokitika to Franz Joseph has been closed and is expected to remain so overnight, which is also the case on the same road from Westport to Rapahoe, north of Greymouth.

And route 70, the inland road to Kaikōura has been closed as the Mason River is rising very quickly.

This means Kaikōura is effectively cut off until tomorrow morning, when decisions will be made on Route 70 and State Highway 1.

NZTA said heavy rain has closed State Highway 1 north and south of Kaikōura. Travellers heading to and from Picton should use the alternate route via the Lewis Pass.

State Highway 60 from Riwaka to Takaka in the Tasman District has also been closed because of fallen trees across the highway, and slips and flooding at the Kaiteriteri turnoff.

The operator of the Diamond Harbour Ferry in Christchurch said it expected to have to cancel sailings later tonight - it was advising people who needed to take the ferry to catch an early evening sailing.

Back in the capital, there are delays of between five and 20 minutes to the Hutt, Melling and Wairarapa train lines.

The Wellington Cable Car will close at 7pm.

And the Queens Wharf ferry is running to a restricted timetable all afternoon.

However, both the Interislander and Bluebridge ferries are still running.

But, transport operators say they are monitoring events closely and delays and cancellations are a distinct possibility.

Commuter trains are running but there might be delays due to continuing problems with signals equipment.

The Transport Agency said commuters in Wellington could face a hard journey home.

Drivers from Taranaki to Canterbury should beware of surface flooding and debris on the roads today and tomorrow.