A royal albatross chick has been killed by its mother at the colony on Otago Peninsula, which is going through a "tough breeding season". 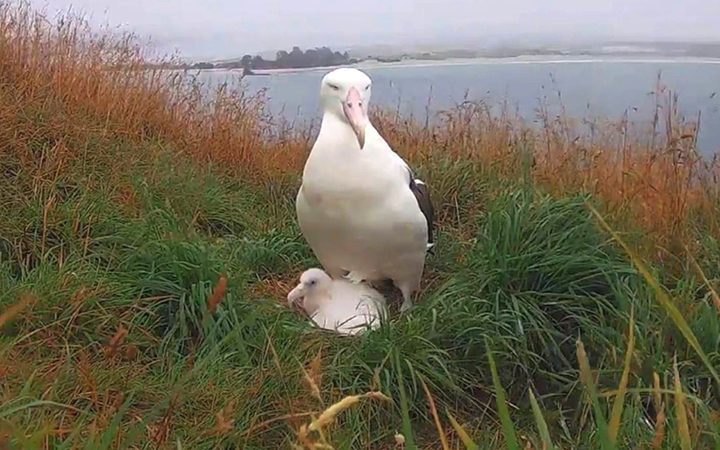 A one-month-old chick was fatally injured by its parent on Sunday night. Photo: Supplied / DOC

Department of Conservation (DOC) said webcam footage of the northern royal albatross/toroa colony at Pukekura/Taiaroa Head showed a female albatross attacking her one-month-old chick, leaving it with injuries it could not recover from.

DOC spokesperson Nicola Toki said adults and juveniles had been seen to be aggressive towards chicks, but this was "unusual behaviour".

"We cannot say exactly why this sad event occurred. Up until now the chick had been doing well with both parent birds showing normal chick-raising behaviour."

Ms Toki said the chick was one of only 16 to hatch this year, with a hot summer stressing the birds.

"With these low numbers, the death of the royal chick is a serious loss to the fragile colony - the only mainland colony of albatross in the Southern Hemisphere.

"While 29 fertile eggs were laid this year, only just over 50 percent of these eggs hatched, down from between 70 to 85 percent in previous years. With increasing frequency of extreme weather events due to climate change, the impact of the loss of any individual, for any reason, becomes even more critical for the conservation of the population."

She said the albatross colony currently had only 14 chicks, compared with about two dozen in each of the past two years.

Ms Toki said the royal albatross was now back on after being turned off last night.