From record-breaking heat to flooding and gale force winds, New Zealand has had more than its fair share of extreme weather this week. 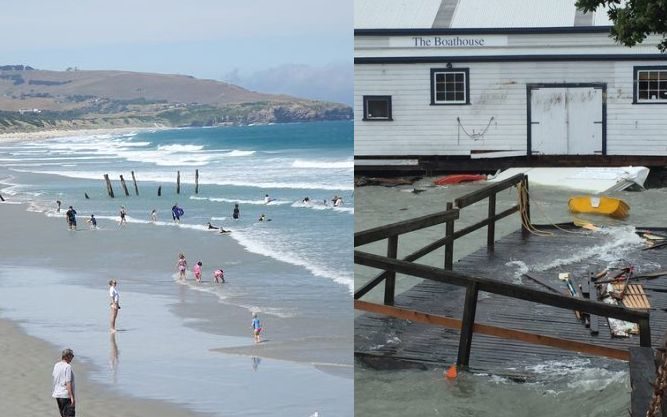 However, scientists are warning this could be the new norm.

They're pushing for a better understanding of what climate change will entail for New Zealand and the measures to adapt.

National Institute of Water and Atmospheric Research figures show January was officially the hottest month since records began in 1909 as temperatures across the country hit an average of 20.3°C degrees.

National Institute of Water and Atmospheric Research (Niwa) principal scientist Dr Sam Dean said there were contributing factors as to why the storm hit so hard.

'It's always going to be the La Niñas, the underlying natural variability in the climate system, to make some years more stormy, than other years," he said.

Dr Dean said while New Zealanders were used to having multiple seasons in a week, the severity was new.

"That natural climate variability and weather variability is happening as it has always happened, but these past few years they've been some of the warmest years in New Zealand.

"We've had periods of southerly airflows, yet we've still been above average in temperature."

'The clock is ticking'

Motu Economic and Public Policy Research senior fellow Suzi Kerr said the research we had into the impacts of climate change was still in its early stages.

"We are just developing for the first time New Zealand focused earth system models, we are doing the very first analysis of quite a lot of the impacts like sea level rise and we still don't have national coverage of where sea level rise impacts are likely to be.

"We are making quite significant gains, but it's very early days, there's a lot more work that we can do," she said.

She said everyday people need to know the changes and the actions they need to take.

"When we're making big investment decisions, we should be asking what the climate risks may be," she said.

Ms Kerr said what New Zealand needed was the capability to answer those questions, adding that you couldn't suddenly magic up experts you had to grow them.

"The good news is these effects will roll out over time, but we do need to be building the capacity of research and in our communities, businesses and councils, to make good decisions."

She added despite this, it was important people knew the science was unlikely to ever be perfect.

"It's a little bit like the same way we never bank on Monday's weather forecast to tell us what the following weekend's weather is going to be, we look at the forecast during the week and we get a more and more accurate prediction.

"Were trying to do the same thing with climate models," he said.

Dr Williams said we also needed to take a multi-model approach, which was why it was important to continue to build ties with the international modelling community.

He noted adverse weather events were some of the hardest things for climate models to pin down.

"Although climate models will give us a good sense of what's happening in terms of changes in the average climate, they may not necessarily pick up all of those extremes like flooding or these very warm summers."

He said these models were fundamental for changing the policies around climate change.