A massive fire has forced the evacuation of 100 homes in Dunedin, burned buildings, and a timber yard with 2000 tonnes of dry logs has likely been lost. 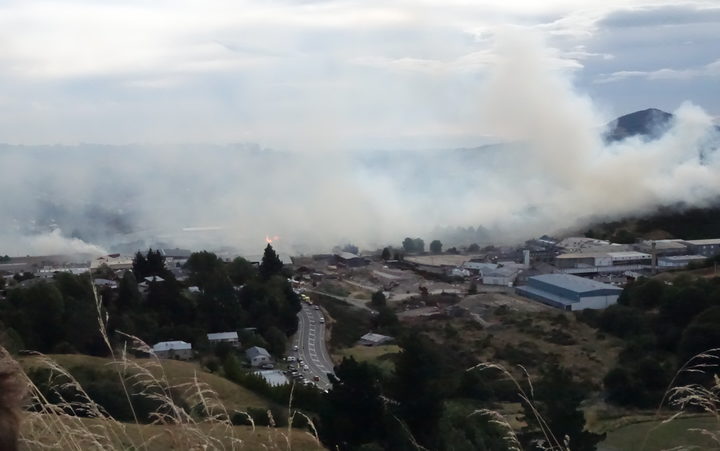 The fire quickly spread across an area of 20-25 hectares. Photo: RNZ / Ian Telfer

Late last night, Fire and Emergency said the fire was contained on three sides, but an uncontained flank was mainly vegetation and hard to access. Part of Dunedin's Southern Motorway remains closed, while civil defence staff and the Red Cross are stationed at the welfare centre in St Clair Golf Club.

Ground crews will continue to work throughout the night to contain the perimeter of the fire.

The Dunedin Southern Motorway reopened with a 30km speed limit, Fire and Emergency said shortly before midnight. The industrial area around the fire site has been cordoned off and people are advised to keep away.

Incident controller Phil Marsh said crews worked to put out spot fires caused by embers being blown onto properties. He said the embers, combined with the dry conditions, meant there was a risk to people's homes.

"The only way to keep people safe was to pull people from out of the area.

"We've been putting warnings out, most of last week and this week, about the spike in temperatures ... It's out of the ordinary, these are extreme fire conditions."

Explosions reported by witnesses were confirmed as being drums of tar.

Mr Marsh said it did not appear that any houses were burnt.

"It's been about 20 to 25 hectares of vegetation including trees that's been on fire and because of the industrial buildings and the woodpiles that have been nearby it's caused spotting of fires in amongst residential areas. So we've had to evacuate approximately 100 houses in the residential area."

Residents of the evacuated homes were not expected to return home tonight.

Residents evacuated due to the Burnside fire are not to return home tonight. The situation will be reassessed at 8am.

One man was coming to terms with potentially everything at his timber yard as about 2000 tonnes of dry logs went up in flames.

Three industrial buildings near McLeods Road were ablaze and the fire spread to nearby vegetation, which was parched due to the recent warm weather. 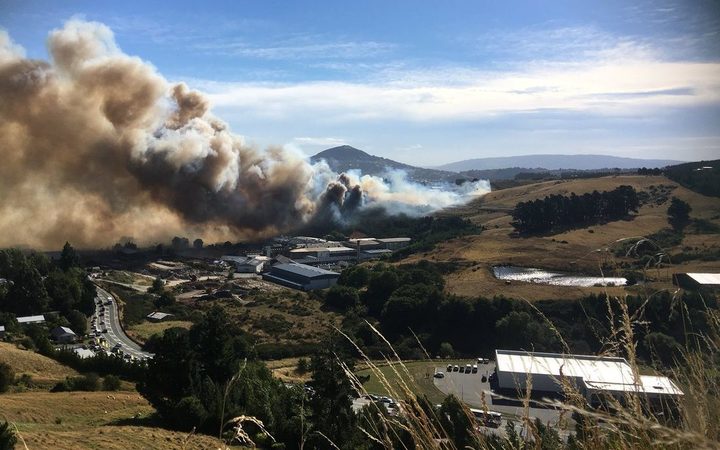 Properties on Morton Street, Mary Street, Mulford Street, Winifred Street and Samson Street have all been evacuated, as well as a section of Main South Road.

Homes and businesses in the area were being evacuated because of the threat from embers and strong winds.

Police said residents of Morton Street, Mary Street and Mulford Street have been asked to leave their homes, and they are advising those living on Samson Road and Emerson Street to think about leaving proactively.

They also suggested people on Stevenson Road, between Emerson Street and Orr Street, to also consider leaving their homes. A welfare centre for those who have left their homes has been set up at the St Clair Golf Club on Isadore Road.

Six helicopters and six crews were responding and two water tankers were on their way.

RNZ reporter Ian Telfer, who was at the scene, said there were visible flames coming from the Burnside industrial complex. 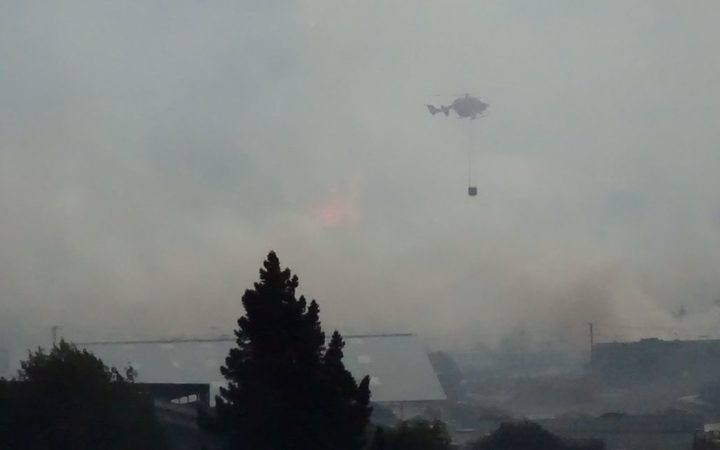 The fire in Burnside in Dunedin. Photo: RNZ / Ian Telfer

Peter Chalmers owns the Valley Lumber yard on McLeod's Road and said he thought he may have lost everything.

"I don't know about my building, I've got a lot of dry timbers in strip stack throughout the yard, I personally think the whole lot will be gone."

Crews were also battling fires in Tahakopa Valley and on Round Hill Road inland from Karitane. 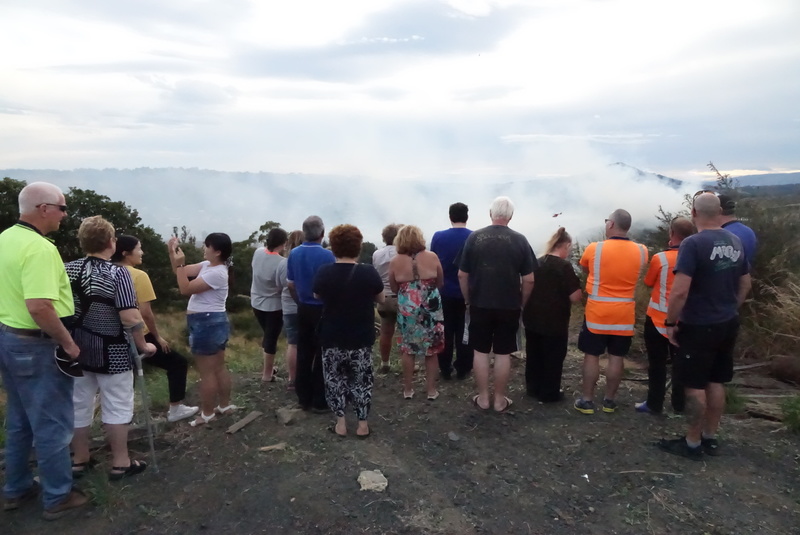 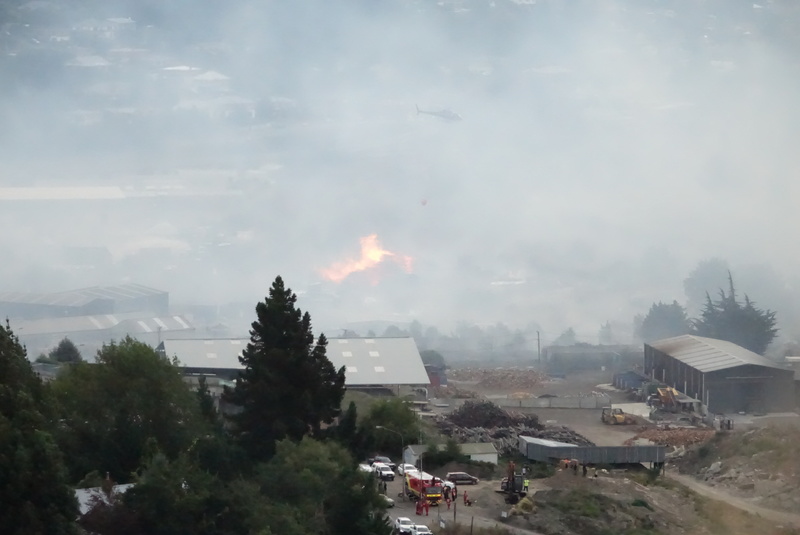 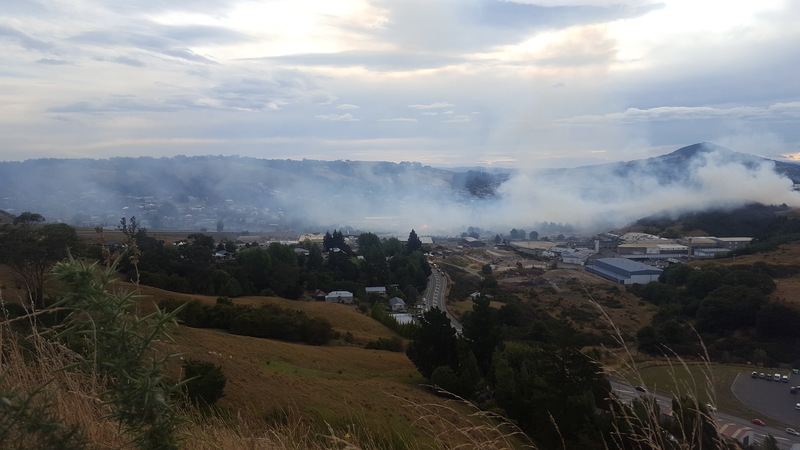 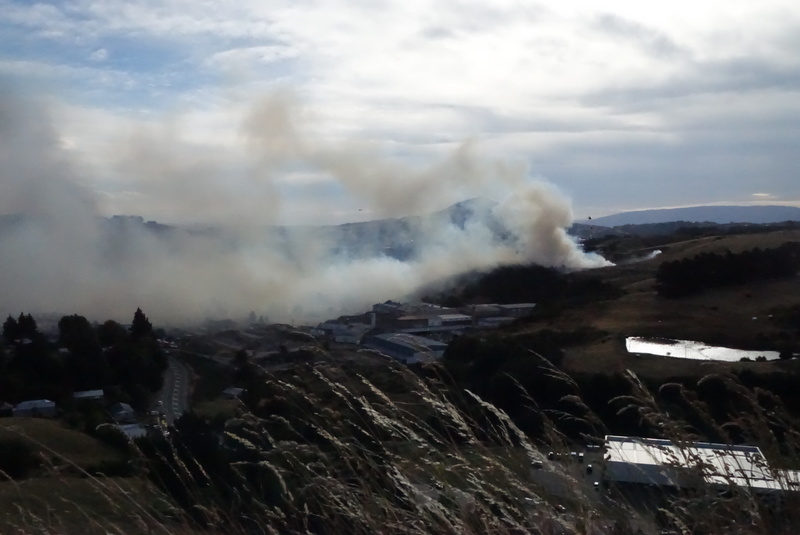 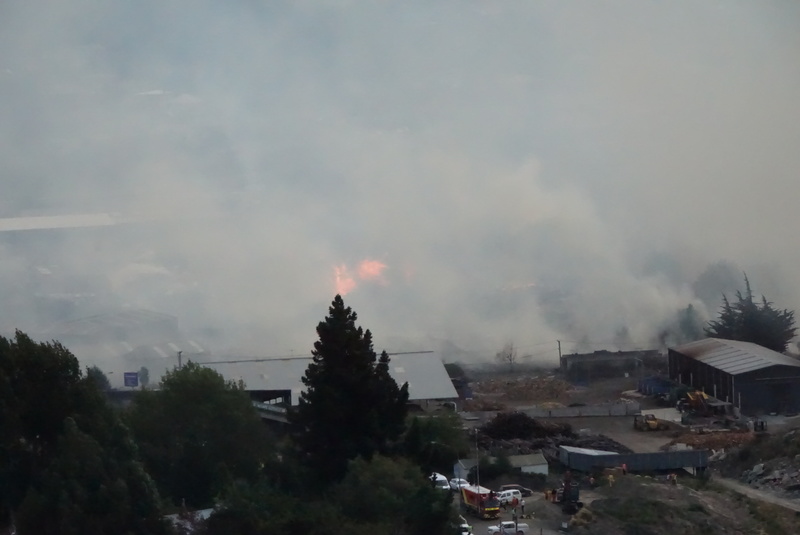 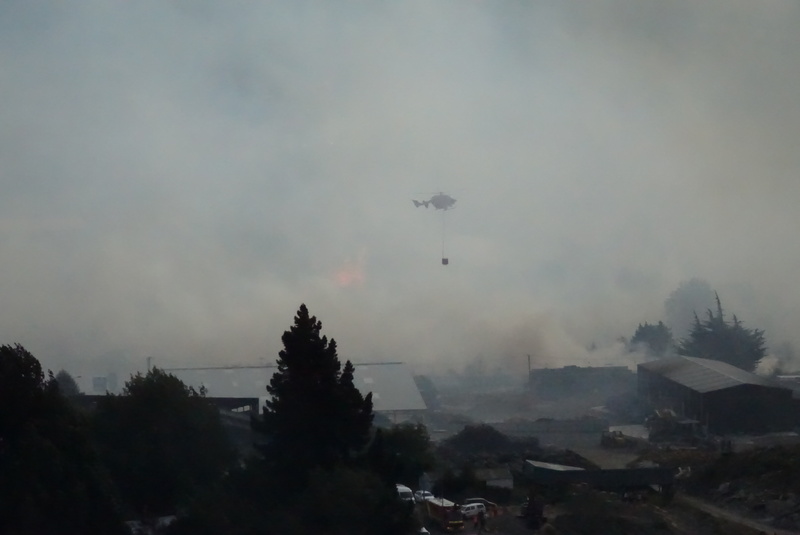 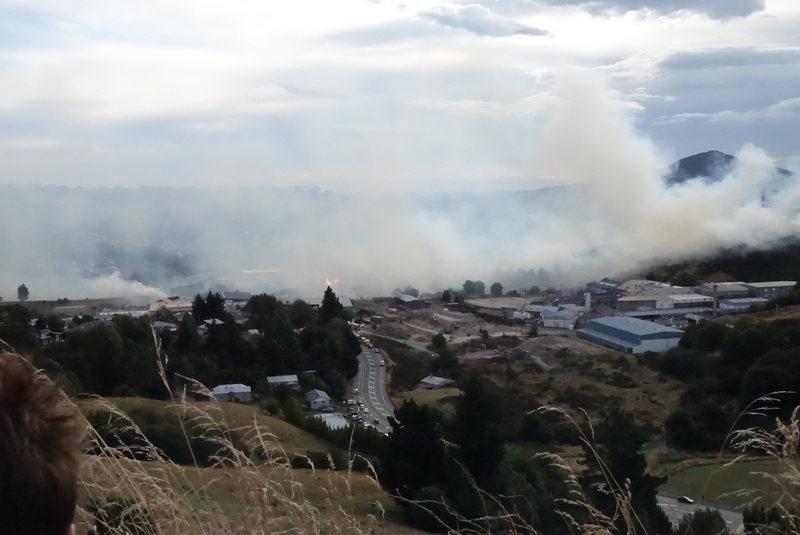 DJ Champion watched the fire from Lookout Point and said smaller fires were popping up all the time.

"With the massive amounts of wind blowing across the valley it looks like that caused ... more fires to start burning. And at the moment I don't think that they have it anywhere near under control."

Meanwhile a fire at a wood plant near Invercargill had reignited after previously being contained.

Five helicopters and 12 ground crews battled a large fire at a wood exporting plant near Invercargill.

The manager of the South Wood Exports plant said the fire started when a pile of woodchips at the plant combusted.

Fire and emergency said firefighters were continuing to battle the blaze on Kekeno Place which has spread onto dry grass and is being fanned by strong winds.

It was still smouldering late last night and Fire and Emergency said it could take days to extinguish.

Principal Rural Fire Officer Elton Smith said a wind shift late this afternoon caused the fire to flare and jump into a pile of logs.

"These logs and large mounds of wood chips are proving difficult to fully extinguish," he said.

Crews will continue to work through the night.

Earlier, the Bluff Invercargill Highway was closed because of the heavy smoke and a nearby fertilizer plant was evacuated because of smoke and embers being blown across the road, but it has sustained no damage and is no longer in danger.