The intense heat is showing no sign of easing today as blisteringly hot temperatures are forecast in both the North and South islands today. 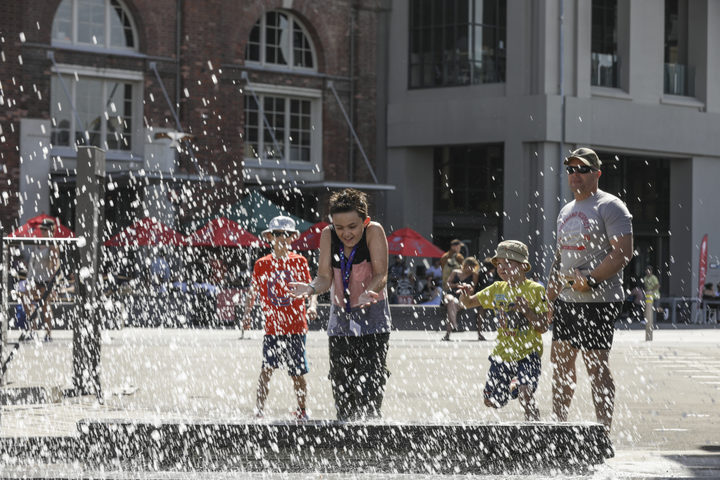 People will looking at ways to cool down. Photo: RNZ / Rebekah Parsons-King

Wanaka broke temperature records over the weekend, getting to 35.2°C on Saturday - and MetService is forecasting 34°C for the town today.

Queenstown reached its third hottest ever recorded which was 31.9°C and Whangaparaoa reached 28.8°C, the highest January temperature since records began there in 1999.

The heatwave is set to continue for the first half of this coming week, with temperatures expected to be around the mid 30s for most of the South Island on Tuesday and Wednesday.

Alexandra is due to reach a sweltering 35°C today and Queenstown 31°C, while in Canterbury, 30°C is forecast for Ashburton.

In the north, Auckland will see 29°C and Palmerston North is due to get to 30°C.

A few areas will get early cloud cover today, but that will burn off in the afternoon.

"Families and caregivers should be keeping a closer eye on those people to make sure they're coping.

"Because it's relentless and ongoing, and people are just living this day in day out, and hot nights, it may become quite a struggle for some."

School will be starting on what could be the hottest day, and Dr McKay said children should have access to plenty of water, and schools will hopefully have heat pumps they can use as air conditioners to cool down classrooms.

Yesterday passers-by helped two distressed pre-schoolers left locked in a car in Hamilton in about 29-degree heat, prompting a warning from to people not to leave children in cars which are liable to get "horrendously hot" in the summer heat. St John ambulance has been busier than usual with a big increase in heat-related callouts.

Later in the week heavy rain and gales are forecast with a potential tropical cyclone in the Pacific that could still pack a punch when it reaches New Zealand, though it won't be at cyclone strength.

MetService expects the change in weather to cross central New Zealand on Thursday and Friday.

The tale of two stories this week with hot temperatures expected to dominate the first half of the week and a low pressure system tracking from the tropics expected for the second half of the week. Here's a look at the rainfall accumulations for the next 8 days ^KL pic.twitter.com/JaWYuYsiij