With more warm weather on the way, New Zealanders are being warned of the health dangers that it can bring after the death of a woman in Christchurch. 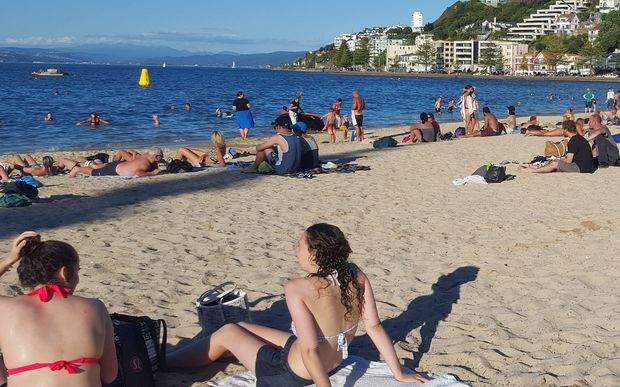 Catching the last of the sun at Oriental Bay in Wellington Photo: RNZ / Karen Brown

A woman with multiple sclerosis died from overheating on Wednesday, prompting a warning from the Chief Coroner.

Yesterday Chief Coroner Judge Deborah Marshall said people with multiple sclerosis, or other illnesses which make them susceptible to overheating, need to keep an eye on symptoms worsening in the hot weather.

On Wednesday, Christchurch hit 32°C and Waiau 37°C, and today parts of the country are expected to hit 34°C.

Canterbury Medical Officer of Health Alistair Humphrey said most people with a chronic condition will find the condition gets worse if they are dehydrated.

He said older people and children are also particularly at risk from the impacts of heat stress.

Dr Humphrey said the most important thing is to drink plenty of water.

Tauranga has already reached 25.6°C this morning and the coolest temperature is a balmy 17.9°C in Kaikōura.

MetService Meterologist James Millward said Wanaka is going to feel most of the heat today.

"It's going to be a nice roasty weekend for a lot of people, especially the long weekenders," he said.

Mr Millward said Aucklanders can expect a max of 29°C which goes right through to Monday.

And while more scorching weather is forecast for much of the country this weekend - MetService this morning issued a severe thunderstorm watch for Waitomo, Taumarunui, Bay of Plenty, Rotorua, Taupo, Gisborne, Taranaki and Taihape.

It said the thunderstorm activity is not expected to be as widespread and intense as yesterday.

Meanwhile, rest homes and retirement villages are topping up on iceblocks to keep residents cool.

Ryman Healthcare has ordered in extra frozen treats from suppliers and said it's ensuring all its 10,000 residents throughout the country are supplied with plenty of fluid.

Age Concern is also urging members of the public to check in with elderly neighbours and relatives.

Mr Millward said the heat is going to continue well into next week, meaning we're on track for the warmest January since records began.

Mostly sunny with a few light winds and a chance of afternoon or evening showers. High 29°C; Low 20°C