Southland fire teams are contacting other regions in case they need help to fight another big blaze. 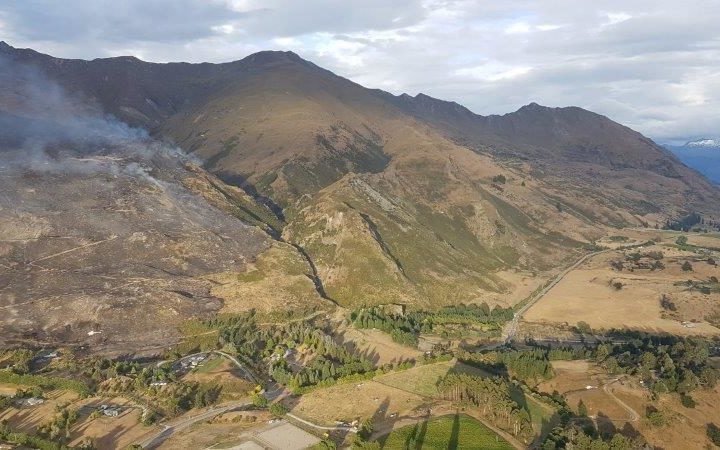 A fire near Wanaka in Otago earlier this month. Photo: FENZ

The region has had a string of hot days of over 30°C in recent weeks, with more to come next week.

There was also a large fire on the Tiwai Peninsula earlier this week, which is still being monitored by a fire crew.

Southland Fire and Emergency's Sally Chesterfield said the conditions had left the service strained. She said it was preparing for continuing hot weather by ensuring teams were well-rested and able to respond if needed.

They had also made contact with rural fire teams in other regions which could be called on if needed.

Ms Chesterfield said so far it expected cover from within the South Island, but some specialist roles, such as managing aircraft or planning how to fight a fire, may need to come from further afield.

Local crews could currently cope with a large fire, she said, but the dry conditions meant they had to prepare the worst case scenario of multiple large fires.

Meanwhile, North Canterbury fire crews will have volunteer teams and aircraft on standby next week.

Temperatures reached 35° in Waiau, Culverden, Hanmer Springs on Thursday and another hot week is forecast.

Principal rural fire officer for Hurunui and Waimakariri, Bruce Janes, said in preparation the paid staff would be on immediate standby - what is called red flag warning - and they would have their gear and trucks ready to go at all times.

"We will also have aircraft on standby, either fixed wings for patrol or helicopters for response, and we will even go as far as having a crew of 4 or 5 people sitting beside these helicopters. Particularly in areas like Hanmer and Balmoral where the lead times to a fire can be long if it is not beside a road."

Mr Janes said rural crews were largely volunteers, so being on stand-by required a major commitment for the teams. He said the fire season has not been too busy so far this summer, but he conditions were ripe for fires at the moment.