New Zealand is suffering a fan shortage as Kiwis swelter in record heat and humidity. 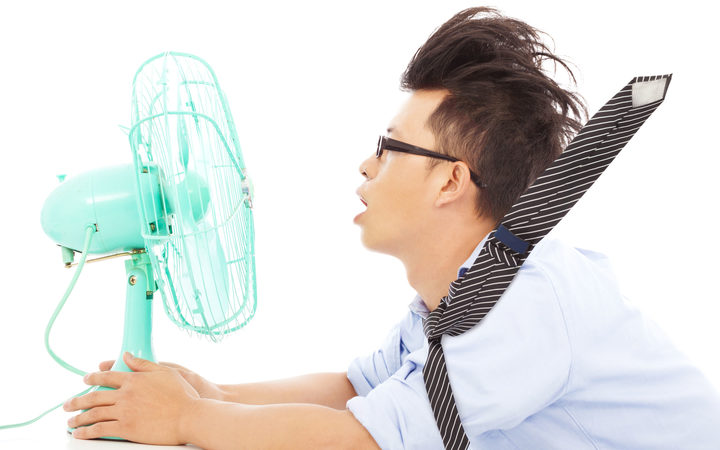 Online stores for Bunnings, Briscoes, Mitre 10 Mega and K Mart have all sold out of electric fans.

Farmers still had some in stock - but they started at $750.

The Warehouse had sold out online but and said stock was limited in shops.

The Warehouse's general manager of general merchandise, Jenny Epke, said the early start to summer was to blame, with demand for fans, as well as paddling pools, spiking in November - much earlier than usual.

"Demand for these products continued throughout Christmas and New Year, particularly in the Wellington region - which experienced the largest sales growth for fans across the country, compared with last year," she said.

And it was not just online where fans were scarce.

Of a quick ring-around by RNZ of about 15 large retailers at different spots around the country, only one - in Dunedin - had fans in stock.

A shop worker at a Mitre 10 Mega in Christchurch said there were no electric fans for less than $100 dollars at any of its Christchurch stores.

Demand for fans is unlikely to drop off any time soon with MetService predicting many centres to hit the 30s today.

Aside from the thunderstorms, tomorrow is going to be a scorcher, with 33 picked for Masterton and 31 for Christchurch ^TA pic.twitter.com/cDoo2N00Jk

And it said the current spell of hot and humid weather was likely to last at least until the first weekend of February.

However, MetService tweeted that there is still a chance of severe storms in the North Island today.

Thunderstorm activity should be less extensive than yesterday. However there is still a chance of severe storms about the ranges in the north-east of the North Island. ^AG https://t.co/pM5zC4kxuc

They also tweeted that there were 1869 lightning strikes yesterday.

Fine with light winds and a high of 27°C.

Fine with a few light winds and clouds in the evening. Will reach a high of 28°C.

Sunny with light winds and sea breezes. Will reach a high of 29°C.

Fine with a chance of afternoon showers, light winds and sea breezes. Will reach a high of 27°C.

Sunny and hot. Easterly breezes this afternoon with a high of 30°C.

Low cloud near the coast at times with a chance afternoon showers. Will be some easterlies and will reach a high of 22°C.

Occasional rain, clearing this afternoon. Light winds and a high of 21°C.