Leaders of New Zealand's burgeoning space industry say the successful launch of a rocket at the weekend is a giant leap forward for the sector. 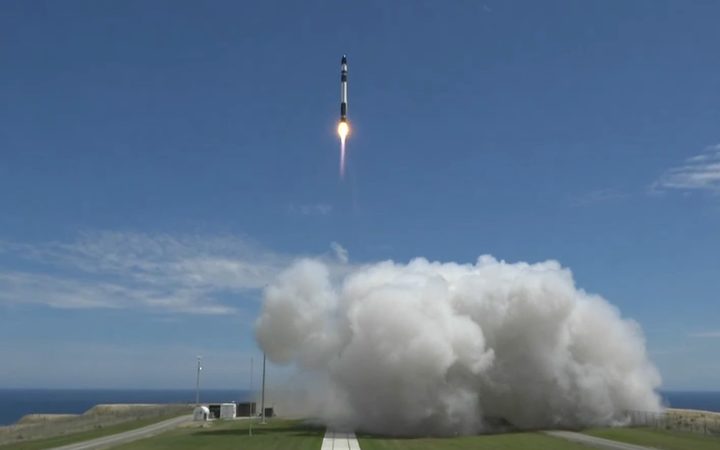 Rocket Lab successfully launched a rocket into orbit for the first time on Sunday, deploying three miniature satellites shortly after taking off from the Mahia Peninsula.

That makes New Zealand the smallest country, by population, ever to launch a rocket into space.

Chief executive Peter Beck said the race was now on to commercialise the rocket, which carried smaller satellites.

"We are ahead of the pack by a number of years, we are obviously the first to get there and what we offer with respect to technology and product is quite significantly advanced compared to what others are working on," he said.

Mr Beck said his company was now working to increase the frequency of the launches to once every two weeks in 2019.

Increasing the number of launches and decreasing the satellite size would dramatically reduce the cost of putting a satellite into space. Mr Beck expected it to cost less than $10m each.

He said this would establish New Zealand as a leader in space business.

"Milk powder is great, but no one stands back and goes 'that's incredible'," he said.

"Historically you go to space to demonstrate to the world that you are a super power, and if you look at the countries that have gone to space, they are all super powers."

New Zealand companies and organisations are keeping a close eye on developments in the space sector.

One of those is the government funded Centre for Space Science Technology, in Alexandra, which uses imagery from satellites to collect data on everything from climate change to tourism.

Its chief executive Steve Cotter said it was now much more feasible for smaller organisations, such as his, to put up a satellite.

"If we identify a gap in the data or a business opportunity we would certainly jump on that," he said.

"Five or ten years ago these satellites that were built were ten sometimes hundreds of millions of dollars and it took ten years to build ... now you are able to throw together these little cube-sats together with basically off the shelf components."

The government's space agency closely monitored launches, working with the Federal Aviation Administration in the United States and the United Nations.

Its head Peter Crabtree said all rocket launches had to be signed off by the authorities, as well as any satellite that left New Zealand soil.

"We are in a part of the planet that doesn't face congestion in the air or in the sea, it's favourable in terms of getting launch angles.

"New Zealand is a great place to do business, it's a low cost business environment but it's got high quality regulations and a stable environment in terms of international investment," he said.

"It showcases some career options for New Zealand graduates, there's more opportunities now at the universities for people to get involved with developing satellites."