A new lab in Lower Hutt, north of Wellington, is helping businesses build things like satellite components, sensors for robots and medical devices almost as soon as they are designed. 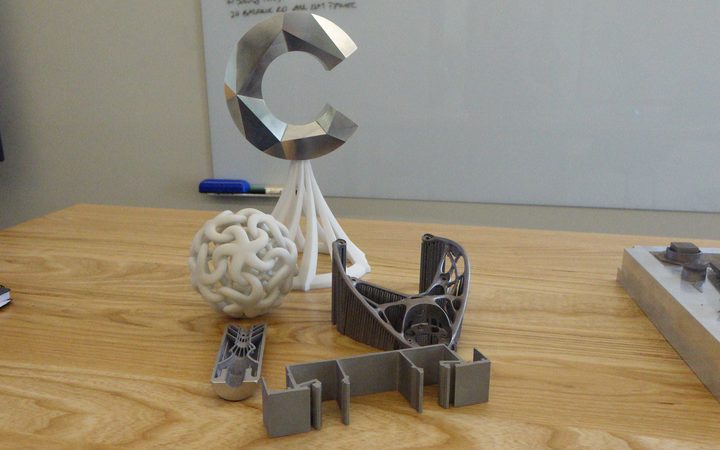 3D printed models and parts made at AddLab. Photo: Supplied

The AddLab specialises in "additive manufacturing" - making three-dimensional objects by building them layer-on-layer.

This 3D printing uses specialised equipment to build parts and pieces one tiny particle at a time, rather than by carving parts from larger pieces of materials the way an engineering workshop would, or moulding materials the way a traditional plastics manufacturer might.

And any business can use it to test items - knocking out inexpensive prototypes such as a bracket to hold a newly-invented sensor on a similarly new robot.

The technology enables testing of slight variations and improvements to components in everything from machining and manufacturing to the medical, aerospace and transport sector.

Parts can be designed and printed almost as quickly as they can be imagined, and the best designs and materials can then be put into production.

Many of the lab's customers are small-to-medium sized businesses, but Mr Thomson said others were big companies cutting costs with 3D technology.

When RNZ visited, team members were pulling together a design for a company manufacturing a product that must fit inside a standard shipping container.

They built a 3D model of the container, the product and even a scaled-down human to test how it would operate before the company commits to making it.

Mr Thomson said 3D printing was a revolution in manufacturing: cheaper and quicker than traditional techniques and flexible enough for fine, detailed and more organic designs.

Examples include a device to extract heat from a fluid, and a bracket for a satellite, each of them extremely light but very detailed.

There are a dozen different types of 3D printing technology, and the AddLab uses a technology called selective laser sintering (SLS) - much more sophisticated than the filament- and resin-based printers consumers are most familiar with.

Daimler Trucks uses this kind of technology in the United States to produce on-demand spare parts for customers.

To create an object, an SLS machine flashes a laser over a bed of superfine powder, sintering or fusing the particles together to form a thin, solidified layer.

The machine then sweeps more powder over the top of that finished layer, and repeats the process until the object is complete.

Those powders can be made of titanium, aluminium, nickel alloy or even cobalt chromium for medical applications.

It can make objects that are as good as parts created through injection moulding, milling, and other traditional manufacturing processes: ready to use, straight out of the printer.

AddLab imports its powders from Canada, but it is currently developing its own.

The lab opened in October and has a staff of four.

For companies such as AddLab, it's no longer correct to say "the sky's the limit".

The engine parts themselves are created using electron-beam melting - which is similar to selective laser sintering printing techniques, but uses an electron beam rather than a laser to melt and fuse metal powders.

By creating the engine chamber, injector, turbopumps and main propellent halves using this method of additive manufacturing, Rocket Lab said it was slashing the cost of getting payloads into space.