Scientists are calling 2017 a year of weather extremes with some areas experiencing record rainfall, dryness and temperatures.

The National Institute of Water and Atmospheric Research has released its annual climate summary today. 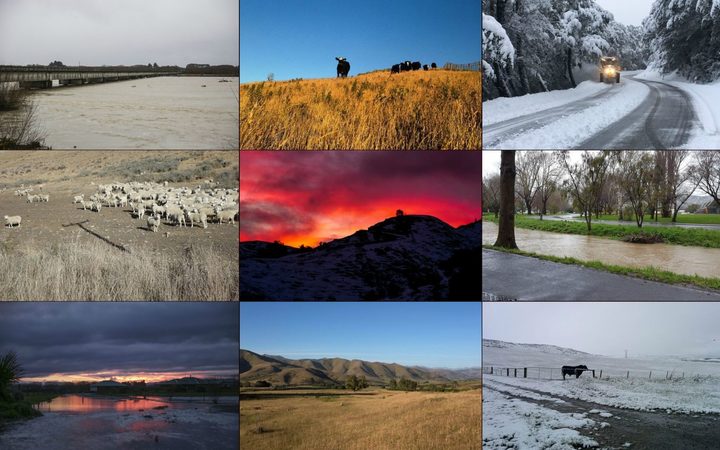 Some areas of NZ were drowned in rainwater, others have seen bone-dry conditions, and a few have seen both. Photo: RNZ

While not as warm as the 2016 record, 2017 was the fifth hottest since records began more than a century ago.

"Lots of extremes was the theme in 2017 between rainfall and dryness and with the end of the year ending in drought across the lower North Island.

Civil Defence declared eight states of emergency, with weather causing most of those, making it the most eventful year since a public list started in 2002.

The year started off wet and extended to an incredibly soggy March and April as the Tasman tempest and ex-tropical cyclones Debbie and Cook contributing to record amounts of rain and flooding.

A total 46 areas had record or near-record April rainfall.

"Whangaparaoa received an incredible four and a half times their April normal with 319 millimeters of rain."

However, by June the weather had reversed with 20 places - mainly in the North Island - having record or near-record low rainfall.

"So a lot of extremes going on just within six months across the country.

Oamaru felt the inconsistent year of weather, experiencing both its wettest and driest months ever.

In its wettest July it had the wettest day the town had ever seen since records began in 1950, with the same amount of rain falling in 24 hours than the next five months would have, combined.

Come November however, the tables turned and it only had 6mm of rain.

"We had some impressive dry spells to end the year ... Christchurch, the longest on record, had 47 consecutive days where less than one millimeter of rainfall occurred."

In terms of temperatures, although 2016 was the hottest year on record, 2017 was still hot with only four years hotter since records began in 1909.

Whangarei, Whangaparaoa and Whitianga all had their highest temperatures ever.

The heat was particularly notable towards the end of the year.

"December 2017 was the second warmest December on record ... and get this, December 2017 was only the third month in the 21st Century, or since the year 2000, where we had nationwide temperatures more than two degrees above average.

"Much like last month, with high confidence we can say that the next three months will feature above average temperatures across the country. Now, it doesn't mean there won't be cold days or even a cool week, but that won't be the theme."

He said the warm ocean temperatures could fuel storms crossing the Tasman Sea.

"So, we are on guard, we are looking out for the potential for more intense low pressure, or storm, systems to impact New Zealand over the coming three months.

Mr Brandolino said climate change had a part to play in every weather event and more extreme cases would only get more common.

"Our Earth is warmer than what it was 10 years ago, 30 years ago, 100 years ago. There is a component of climate change, but the question 'well how big is that?', that's something I can't answer, unfortunately."

"Going ahead into the future we expect there will be more extreme events, be it temperatures, be it dryness, or extreme rainfall events.