New Zealanders being held in Australian immigration centres say it is time to "make some noise" about their indefinite detention and the heartbreak of being deported away from their families. 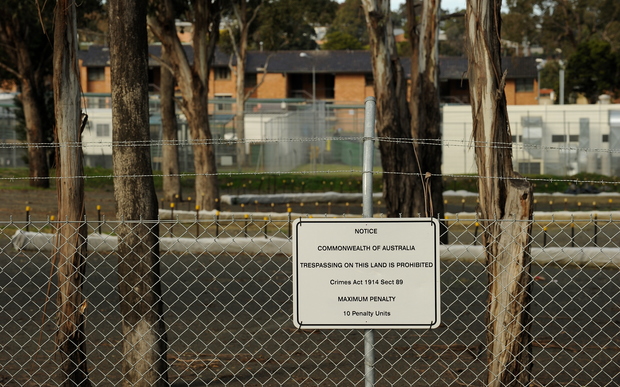 Kiwis have been facing a long wait at the Villawood detention centre in Sydney before discovering their fates. Photo: AFP

The Iwi n Aus group - which supports New Zealanders in Australia - is challenging the new government to stand behind the resolve they showed against the detention centres when they were in opposition.

Labour's Corrections spokesperson Kelvin Davis - who is now deputy Labour leader and Corrections Minister - was highly critical of Australia's policy of locking up New Zealanders in detention centres while they wait to appeal visa cancellations. In 2015 he flew to the remote Australian territory of Christmas Island to raise the issue's profile.

Lorenzo Sua has been in Villawood detention centre in Sydney for four months and said one mistake has destroyed his picture perfect life.

His three children, parents, siblings and extended family live in Australia and he faces deportation for actual bodily harm, a first offence.

He said it crushed his children when they found out his punishment - and theirs - was not over when he left prison.

"For them it's pretty harsh, it's a severe punishment," he said. "I wouldn't wish this upon my worst enemy. It's the ugliest feeling. I feel worthless, I feel hopeless. I wouldn't be in this situation if I hadn't done what I done, but even still it's heartbreaking.

"I have to put on a fake smile when I call my kids - I have to make them believe that everything's going to be okay. That's the hardest part, pretending that 'yeah yeah, no I'm not going anywhere, Dad will still be here, Dad will always be here' and having to lie to them and look in their face and they can see I'm lying. It just breaks your heart."

Deportees are faced with a lifetime ban on returning to Australia, which for some children could mean not seeing their fathers again.

"Whilst in New Zealand we are excited to see a change in our political climate we would like to see a significant rapid turn around regarding the plight of all NZ detainees in Australia," she said.

She was seeking a meeting with Prime Minister Jacinda Ardern - saying that most of all, detainees and deportees wanted to be heard and seen and no longer left "silent, alone, isolated and abandoned" by the Australian and New Zealand governments.

Ms Payne, who has visited all of Australia's detention centres, said detainees were treated differently at each.

"Christmas Island is very isolating," she said. "It's very hard to explain the serenity of an island and then walking into an institutionalised compound where people are actually being abused, held in isolation, completely away from any legal rights."

She said she had been disappointed by Mr Davis' lack of action since the Labour-led government took power.

But Justice Minister Andrew Little told Summer Report the government was still advocating on behalf of the detainees.

He said Prime Minister Jacinda Ardern made clear to her Australian counterpart Malcolm Turnbull during their first visit that the government thought the detainees were being treated unfairly.

"I've visited detainees in the Villawood detention centre myself a couple of years ago and they can be there indefinitely, and I met people who had been there two, three in some cases five years," he said.

"That is a disproportionate response to some of the offending they have committed."