The man who placed a full page advertisement calling Lorde a bigot in a US newspaper has continued his attack. 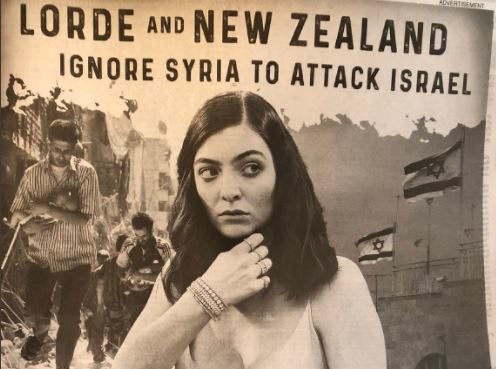 In the ad, which ran in the Washington Post on 31 December, Rabbi Shmuley Boteach of the organisation 'This World The Values Network' called Lorde a hypocrite and bigot for cancelling a show she was scheduled to play in Tel Aviv in June.

Lorde cancelled the show after receiving backlash and getting what she said was an overwhelming number of calls.

In a column for the Jerusalem Post, Mr Boteach said Lorde had joined the Boycott, Divestment and Sanction (BDS) movement which works to end Israeli occupation of contested territories.

Lorde has at no point indicated she had any involvement or affiliation with the BDS movement, or that it influenced her decision.

A Palestinian group in New Zealand said that, while it backed Lorde's decision not to play in Israel, there was concern about the backlash she was getting.

She said the group was very conscious Lorde had been heavily criticised since.

"[They] feel very concerned that her position will be undermined by this nasty invective that has been launched against her," she said.

The Government refused to comment on criticism against New Zealand's position at the United Nations saying it was an advert paid for by an individual targeting a pop star.

The Ministry of Foreign Affairs and Trade also declined to comment.