Experts investigating the Havelock North gastro outbreak warn hundreds of thousands of New Zealanders - one in five people - are at risk of getting sick and universal treatment of drinking water is needed. 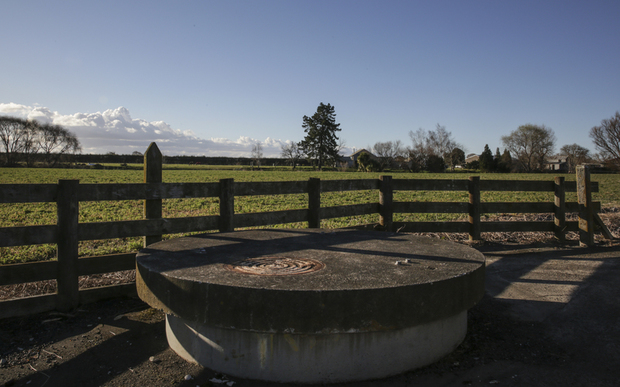 A Havelock North bore. A new report says many supplies around the country are at risk. Photo: RNZ / Rebekah Parsons-King

Attorney-General David Parker said it made for sober reading. There were a series of failures that led to so many falling ill in Havelock North and in other areas of New Zealand, he said.

"We will take control of the mess left by the previous Government, address any regulatory gaps, and work with councils to ensure water in New Zealand is supplied safely," he said.

"This is a priority for us as a government."

The report warned nearly 800,000 New Zealanders - or 20 percent of people on town supply - are drinking water that is "not demonstrably safe". 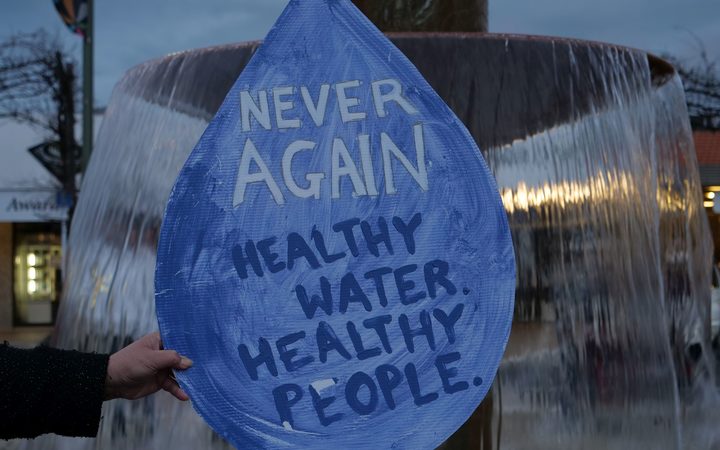 Havelock North residents say they are still being affected by pain and illness from the outbreak. Photo: RNZ / Jemma Brackebush

More than 5000 people were made sick in August last year as campylobacter spread through the village's contaminated drinking water. Dozens were hospitalised, and at least three were left with a chronic condition called Guillain-Barre syndrome.

A government inquiry was launched as a result. It was split into two parts, with the results of the first phase were released in May.

The first stage of the inquiry found the Hawke's Bay Regional Council and the Hastings District Council failed to meet their responsibilities to safeguard Havelock North's drinking water.

Drinking stations were set up around Havelock North during the crisis. Photo: RNZ / Rebekah Parsons-King

The second report - released this afternoon - has called for much greater treatment of water supplies.

It said it was necessary to treat all reticulated drinking water in order to protect the health of the public - particularly the vulnerable such as the young, elderly and ill.

It also warned complacency was rife among the district councils who supplied drinking water and has made 51 separate recommendations.

The inquiry has called for an independent drinking water regulator to oversee the entire system - monitoring, compliance and enforcement.

The report also slammed the Ministry of Health's response after the outbreak, stating there was "an enormous vacuum of leadership".

While the inquiry did not criticise the Ministry's immediate response, "what is of concern, however, is the inaction and lack of energy by officials, in the period after September 2016".

It also found the Ministry's resources were seriously inadequate.

The Ministry has only 3.5 staff dedicated to looking after water supply, which the inquiry found was "nowhere near adequate to properly discharge the statutory functions, let alone also provide effective leadership". 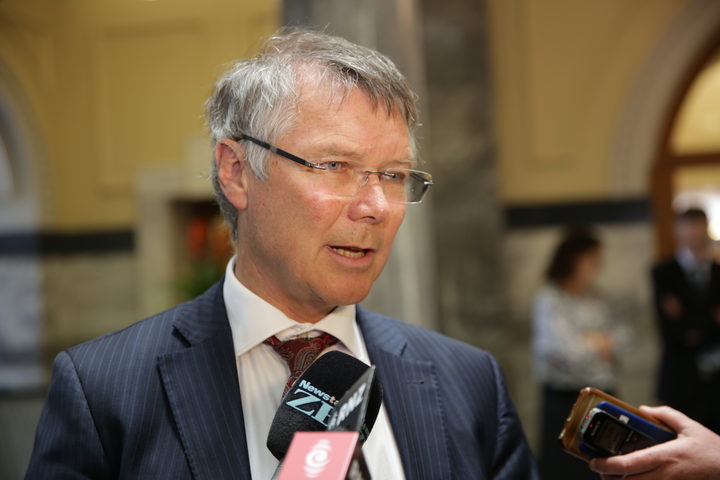 'We must do better'

Mr Parker said the report highlighted that the quality of drinking water in New Zealand was often inadequate, and that regulation and enforcement have been poor.

"We must do better.

"My message to New Zealanders is that we are taking this seriously, and we will be responding quickly to address the issues raised."

Mr Parker said the government has written today to mayors and District Health Boards throughout the country.

"We've asked them to check the water they're supplying residents meets current standards, given the report finds significant non-compliance."

"Overall, this report raises serious concerns about oversight and infrastructure. We will be pursuing solutions to address any problems identified.

"I'll be briefing Cabinet before Christmas on the next steps - both short and long term."

October 2015: The Hastings District Council closes the number three bore at the Brookvale bore field indefinitely after E coli contamination. Bore three is one of three bores that supplies water to Havelock North from the Te Mata aquifer.

The council begins an investigation into what caused the contamination. Bores one and two continue to draw water.

Tuesday, 9 August 2016: Standard water tests - which the Hastings District Council conducts every two days - come back clear of any contamination.

The Hastings District Council conducts another routine water test. Results are expected the next morning.

Friday, 12 August: People continue to become ill, with some heading to hospital.

Water test results received about 10.30am are suspicious. The Hawke's Bay DHB calls schools and confirms large numbers of absences. Hastings Mayor Lawrence Yule is not informed until about five hours later - he makes a decision to chlorinate the water.

Later that afternoon, the council decides to also issue a 'boil water' notice, and starts informing the media and public from about 6pm.

The DHB confirms that an elderly woman living at a resthome has died of a gastric illness but says it does not know if the death was caused by drinking contaminated water.

Dozens of people are now arriving at hospital with gastric illness, with eight taken to the emergency department.

Testing shows most people who are sick are infected with campylobacter. Officials continue to investigate the cause of the contamination.

Monday, 15 August: The DHB says 280 gastroenteritis notifications were received over the weekend and it suspects there are many more cases that have not been notified. It estimates the total number of cases as up to 2000. The contamination might be from animal faeces entering the water supply, it says.

With hundreds of pupils still absent, all schools in Havelock North decide to close for at least two days.

Hastings Mayor Lawrence Yule publicly apologies for the "horrific" outbreak and says there will be an independent inquiry into how the contamination happened.

Residents and some councillors start to question why they were not informed earlier on Friday when the suspicious test result first came back.

Tuesday, 16 August: The DHB keeps a 'boil water' notice in place, saying it still has not ruled out the presence of cryptosporidium in the water, which cannot be treated with chlorine.

Nine tankers of fresh water are parked in strategic places around Havelock North for residents to fill bottles from, while the Red Cross visits hundreds of homes to deliver supplies such as toilet paper and nappies.

Thursday, 18 August: The government announces it will hold its own independent inquiry into the contamination.

Meanwhile, one of the tankers brought in to provide people with clean water returns an E coli indicator - later found to be a false positive. However, on the day, the council extends chlorination to all of Hastings' water supply as well.

The Hastings District Council releases the results of an investigation into the 2015 contamination of Brookvale bore three. Part of the investigation looked at a nearby piggery and a mushroom farm, but the report was inconclusive.

Secondary schools re-open but primary schools say they will stay shut for the rest of the week. Restaurant and cafe owners in Havelock North say they're considering a class action to recover losses caused by the outbreak.

Friday, 19 August: The Hawke's Bay DHB revises its estimate of case numbers upwards to 4100. It also confirms the 89-year-old woman who died last week had campylobacter, but it is too early to say whether the infection caused or contributed to her death. The Hawke's Bay coroner opens an inquiry.

The DHB also says the campylobacter bacteria could have started to incubate in humans as early as 5 August - a week before authorities announced the water supply was contaminated. Very heavy rain fell that day and the following day, which has been one of the theories put forward as the cause of the contamination. However, officials still cannot confirm the source of contamination.

The latest tests of Hastings' and Flaxmere's water supply show there is no contamination and residents no longer need to boil their drinking water.

The Hastings District Council says, however, the area's water supply will be chlorinated until further notice.

The E Coli scare in tanker water delivered to Havelock North turns out to be unfounded.

May 2017: The Attorney-General releases phase 1 of the inquiry, which found the Hawke's Bay Regional Council and the Hastings District Council failed to meet their responsibilities to safeguard Havelock North's drinking water.

Lyn Stevens QC said the inquiry found failings on the part of the councils.

He said these did not directly cause the outbreak but the outcome might have been different without them.

The report confirmed sheep faeces were the likely source of the campylobacter contamination.

Tuesday, June 27: The second phase of the inquiry into what went wrong begins, with hearings getting underway in Hastings.

This time the focus was on the relationship between regional and district councils, and drinking water safety across the country.

During the hearings experts say New Zealanders aren't aware of the dangers of unchlorinated water.

Monday, September 25: The Ministry of Health releases a report revealing the outbreak cost about $21 million and the biggest cost, $12.4m, was borne by households.

Wednesday, December 6: The second phase of the inquiry is released.