A new computer animation shows what a proposed America's Cup Village might look like on Auckland's waterfront.

Dunedin-based Animation Research has produced a fly-through video of one of two options still being mulled over by Auckland Council, the government, and Team New Zealand.

The firm's founder Ian Taylor has been involved in television graphics and animation for America's Cup broadcasts since 1992, and said he wanted people to see what the event could look like.

"I don't know how they can have a debate if they don't see what they are talking about, so we've said - if this got built, this is exactly what it will look like, now debate that," he told RNZ.

Mr Taylor's been a long-standing advocate for the role the America's Cup plays in developing and showcasing New Zealand tech companies.

"In the last America's Cup, Team New Zealand didn't win a boat race, it won a technology race, and beat some of the smartest companies in the world." 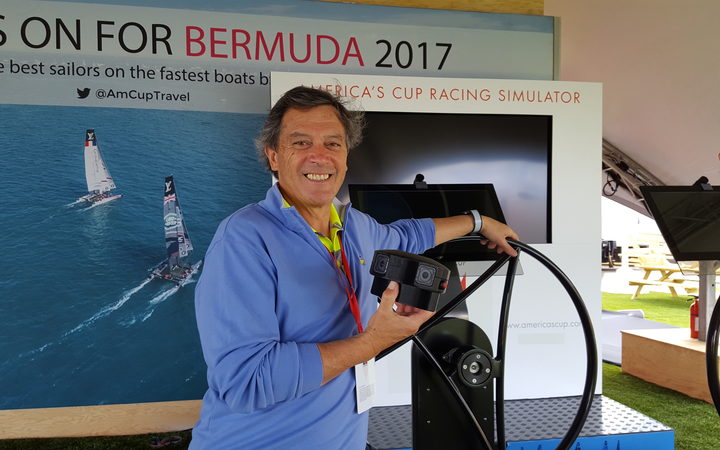 ARL's Ian Taylor in Bermuda with a simulator produced by the Dunedin firm. Photo: RNZ/Todd Niall

"We've got companies like Shotover Cameras in Queenstown - world leaders in stabilised cameras - so what if in 2021 we are using them for covering the yacht races?"

The animation shows an option not preferred by the Auckland Council, which last week discounted Team New Zealand's preferred choice of village format as too expensive and too intrusive on the inner harbour.

The council last week made its preference a $132 million plan to spread eight bases across small extensions on the Wynyard, Halsey Street and Hobson Wharves.

A secondary choice also included some development on the western side of Wynyard Wharf, and it is this version protrayed in ARL's animation.

The council, government, and sailing team are still to finalise that choice by Christmas, and expect to conclude a host agreement and funding details early in 2018 for holding the 36th America's Cup in Auckland at the start of 2021.