Heavy rain is continuing to cause problems in Central Otago, with homes in Clyde surrounded by floodwaters last night and more rain expected later today. 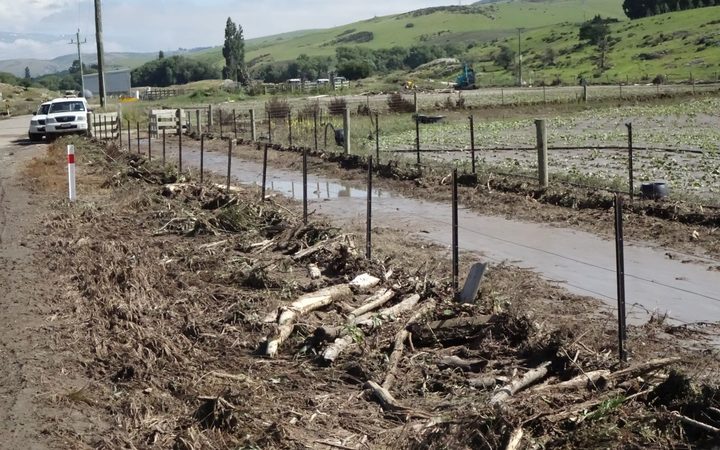 The Fire Service was called out to five homes between 8pm and 9.30pm after lightning storms brought heavy rain.

None of the homes needed to be evacuated.

The town flooded when 40 millimetres of rain fell in two hours, with the deluge knocking out power and water to the town's 600 residents, covering roads and gardens with silt and damaging sewers.

He said Roxburgh would have a greater police presence for the next few days.

Central Otago Mayor Tim Cadogan said the diggers were out again this morning, but the forecast for further heavy rain was a worry, as the culvert designed to deal with the deluge was still full of rubble.

"There is some concern there, we're going to watch nervously today with that heavy rain and see if it copes."

He said water services should be restored tomorrow, as both power and piping at the reservoir needed to be repaired, before it could be refilled and the line is tested.

Mr Cadogan said there were a number of water tankers around the town, and about one portaloo for every 26 people.

Same pattern tomorrow: Ridge of high pressure in charge, afternoon thunderstorms inland. To find out if any thunderstorms might affect your town, visit https://t.co/Yjbq0jfCz1 ^HM pic.twitter.com/uvt3tbo292

A Central Otago District Council spokesperson said the council was in close contact with Metservice about the possibility of another storm hitting the area today.

Roxburgh woman Becky Slade told Morning Report the clean-up at their property - which was 30m away from the creek - was a huge operation.

She said they had to clear out "thick, horrible, gloopy" silt, as well as rocks and debris.

Ms Slade said the power and phone was back on in her house, but the water was out.

The creek was "roaring" during Sunday's deluge, she said.

"I've never seen rain like it, the thunder and lightning stayed on us for three hours."