New Zealanders stuck in Bali because of an erupting volcano could be left with large bills to cover last minute travel changes. 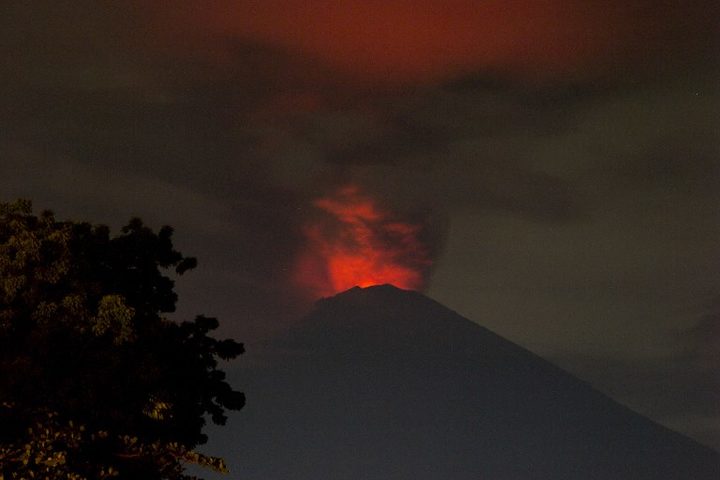 Flights have been cancelled and the main airport on the Indonesian island remains closed as Mount Agung spews ash and smoke high into the sky.

But warnings about volcanic activity were first raised in September, and those who booked their holidays after that may not be covered by travel insurance.

Are you stuck in Bali? Share your stories and pictures with us at iwitness@radionz.co.nz

Mt Agung on the eastern side of Bali has been blowing since September, causing local authorities to impose a 12km exclusion zone around the mountain and issue their highest level alert.

Now, with the strong possibility of an explosive eruption, Bali's main airport has closed.

Both Virgin Australia and Jetstar have cancelled all flights.

Flight Centre New Zealand general manager Sean Berenson said they had fielded calls from worried customers who were either in Bali or expecting to travel there in the next week.

"We've been proactively contacting customers where we've been able to. There is certainly customers reaching out trying to establish what they do now that Bali's main airport is closed."

Mr Berenson said most people had been calling to find out about their travel insurance, and how they were covered when it came to booking last minute accommodation.

He said some may be covered, but people who booked after the initial warning was issued two months ago may not be.

"It definitely comes to a case by case basis. I would encourage anyone to get in touch with their travel agent so they can talk to the travel insurance provider on their behalf, but from the 18th of September it became a known event."

The Ministry of Foreign Affairs and Trade (MFAT) issued a warning on 26 September saying there was an extreme risk to safety near the exclusion zone.

It said 112 New Zealanders were registered as being on the island.

Ben Rosamond and his girlfriend have been there for a week and were due to fly home on Sunday night when their flight was cancelled.

Mr Rosamond said they were now staying in Kuta, about 75km from the volcano.

"It was sort of good for us because Virgin Australia cancelled their flights before anyone else did so we got in, I guess, before the big rush.

"It seems like the hotel lobby now is teeming with people and it looks like it's hard for other people to get accommodation."

MFAT said New Zealanders in Bali were advised to follow the advice from local authorities, including evacuation orders.

Insurance Ombudsman Karen Stevens said anyone who booked travel insurance after 26 September, when MFAT issued warnings, would not have their flights covered.

"If people are travelling to Bali now, and they know about the eruption, they are not going to be covered for something they already know about.

"It's really important that they know the difference between getting insurance before an eruption, and after the eruption's happened."