Bali's main airport has shut until at least tomorrow morning after the alert level on Mt Agung was raised to highest level of four. 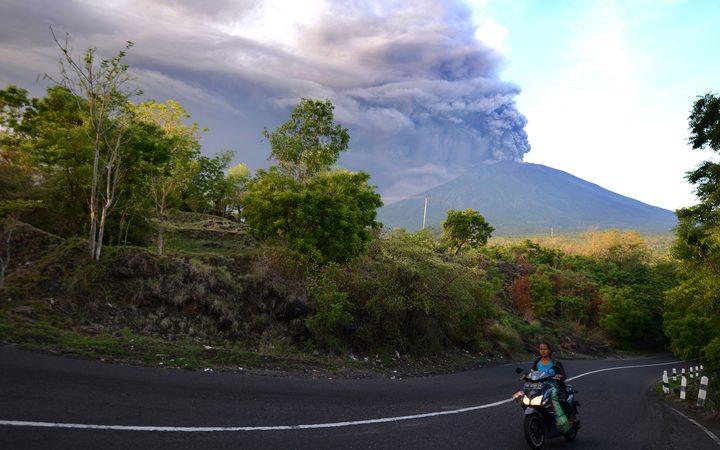 The volcano alert on Mt Agung has been raised to the highest level Photo: AFP

Indonesia's disaster mitigation agency said it had raised the alert to the highest level, four, on Bali's Mount Agung volcano and warned residents in an 8-10km radius around the volcano to evacuate immediately.

Hundreds of New Zealanders have been stranded as Mt Agung volcano continues to spew ash and smoke high into the sky.

The Ministry of Foreign Affairs said 112 New Zealanders were registered as being in Bali.

It said New Zealanders throughout Bali were advised to follow the advice of the local authorities at all times, including any evacuation orders.

"Grey ash and occasional weak blasts can be heard 12 km (seven miles) from the peak. Flames were visible at night which indicates a potential eruption could happen anytime," Indonesia's disaster mitigation agency said in a statement.

"In anticipation of the possibility and imminent risk of disaster, PVMBG (the Volcanology and Geological Disaster Mitigation Centre) raised Mount Agung alert level from three to four starting from 6 a.m. local time," it said in a statement.

The volcano has been spewing smoke and ash for more than 24 hours, with the plume reaching up to 4000m, and the alert level is now at its highest.

Senior volcanologist Gede Suantika said there were fears a full-scale eruption of the volcano was imminent.

"The activity of Mt Agung has entered the magmatic eruption phase, although it is still spewing ash at this stage.

"We need to monitor it and exercise caution as there is still the possibility of a strong, explosive eruption."

One stranded New Zealander, Ben Rosamond, said he and his girlfriend had been lucky to find accommodation.

They've been in Bali for a week and had been due to fly back to New Zealand last night.

Mr Rosamond said they are now staying in Kuta, about 75km from the volcano.

"It was sort of good for us because Virgin Australia cancelled their flights before anyone else did so we got in, I guess, before the big rush.

"It seems like the hotel lobby now is teeming with people and it looks like it's hard for other people to get accommodation."

The commercial director of House of Travel Brent Thomas said the situation is constantly changing and it could take days or weeks for flights to return to normal.

Flight Centre said about 1000 of its customers were either in Bali or on their way to the island.

It did not know how many had had flights cancelled and it was urging all customers to get travel insurance.

The Ministry of Foreign Affairs said it would continue to update information on its safe travel website.