The Crown has rejected a suggestion that tissue found in stains on Mark Lundy's shirt might have contained animal material from spilt food. 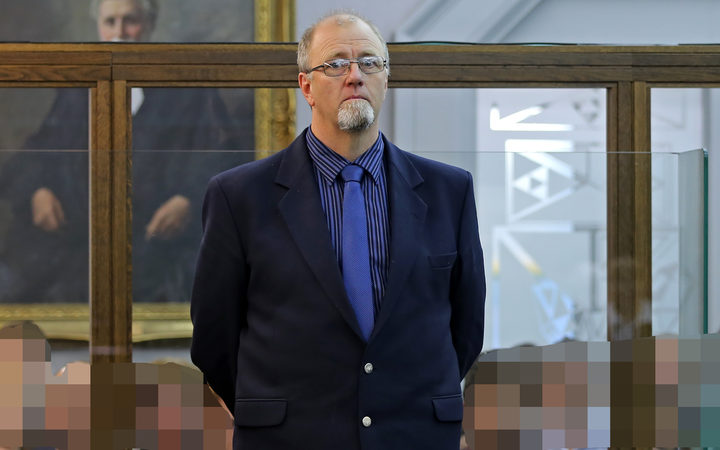 Mark Lundy before the verdict in 2015. Photo: RNZ / Sharon Lundy

The bodies of Christine Lundy, 38, and Amber, 7, were found by Mrs Lundy's brother in their Palmerston North home on 30 August 2000. Both had been bludgeoned to death.

Mark Lundy, who has twice been found guilty of murdering his wife and daughter, has gone to the Court of Appeal this week in an effort to have his 2015 convictions overturned.

An important part of the Crown's case at Lundy's retrial was the scientific RNA evidence.

RNA is similar to DNA but allows a scientist to pinpoint which part of the body a particular piece of tissue is from.

Earlier this week Lundy's lawyer told the Court of Appeal that allowing that evidence to go before the jury was wrong and left them 'drowning in a sea of science'.

However, Crown lawyer Philip Morgan QC said today that the presence of Mrs Lundy's brain tissue on her husband's shirt was an incontrovertible piece of evidence, and even the defence team accepted that.

He said the defence suggestion that the brain tissue must have got on the shirt through contamination by police officers was wrong because the investigation wasn't that "hopeless".

"Most importantly ... the opportunity for police officers or members of the public to have got central nervous system tissue on their clothing while visiting the scene and to have got it on the inside of the appellant's shirt which was found inside out in his suitbag in the back of his car, was nil."

Mr Morgan said expert witnesses told the retrial the brain matter had to have got there when it was fresh because such material dried very quickly and once it was dry, it could not have been smeared into the shirt fabric.

He also rejected a suggestion that the stains containing Mrs Lundy's brain matter might have also have contained tissue from meat spilt from a pie, saying Mr Lundy would have had to be very unlucky for that to happen.

"To be eating a chilli, beef and cheese pie, to get a piece of cooked beef on your shirt which has miraculously transformed itself into being fresh and capable of being smeared and Christine Lundy's DNA has got on the same spot in this large quantity consistent with tissue or blood," Mr Morgan said.

"Not just once; it happened twice."

At Lundy's first trial the Crown suggested he drove at break-neck speed from Wellington to Palmerston North, killed his family and drove back to Wellington.

However, at the retrial in 2015 it said the deaths had occurred early on the morning the bodies were found.

Mr Morgan denied a claim by Lundy's team that it was disadvantaged by the change to the estimated time of their deaths, saying the defence had been given plenty of information during 2014, many months before the February 2015 retrial.

"They had in May, Doctor Sage's evidence which said that [the first pathologist] Doctor Pang got it all wrong and they had since August the fact that there was no manipulation of the [Lundy's] computer.

"And they'd known we were always going to amend the indictment [Crown charge notice] since October and [they] said there was no objection to that."

Mr Morgan said the defence team was experienced and able, they did not ask for the trial to be called off and they went to court recognising the Crown had a good case that it was Mrs Lundy's brain tissue on the shirt.