The Wind Wand on New Plymouth's Coastal Walkway appears to have blown a fuse but is otherwise undamaged after being struck by lightning. 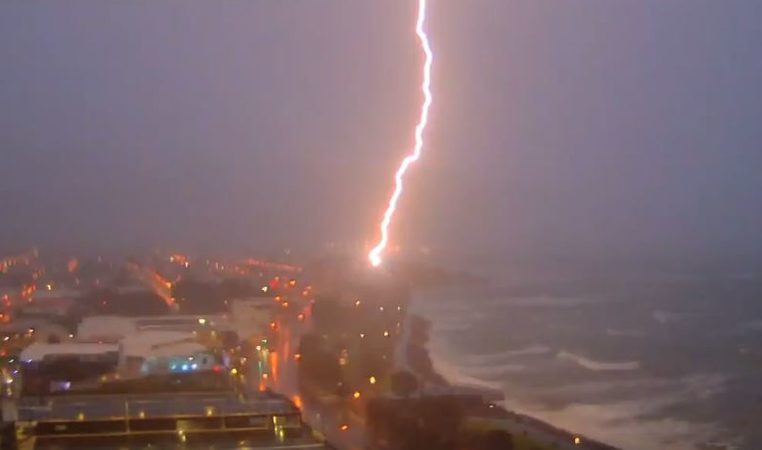 New Plymouth council manager of recreation and culture Teresa Turner said the ball that encloses the Wind Wand's light is intact and the fibreglass and carbon fibre structure is undamaged.

Check out PrimoWireless' video of the strike:

Ms Turner said the Wind Wand has been struck by lightning several times before and its design takes that possibility into account.

She said replacing the fuse does not require scaling the structure and could be done later today.

About 3000 lightning strikes in 12 hours

MetService and Taranaki Civil Defence had earlier issued a warning about severe thunderstorms and this morning MetService reported there had been almost 3000 lightning strikes over New Zealand in the previous 12 hours.

Lines company Powerco said 226 properties in Stratford remained without power this morning after losing their connection at about 10.15pm.

It said it expected power to be back on at midday.

Last night about 120 properties in Manaia lost power at about 6.20pm and about an hour later 27 properties in Opunake lost their connection.

Power had been since been restored to these properties.

Thunderstorms continue to be a threat across the northern and central parts of the North Island and MetService has issued a warning until midnight today.

It said there was a moderate risk of thunderstorms until this evening in western areas from Auckland to Taranaki, including the Coromandel Peninsula and western Bay of Plenty.

The warning extended to Northland, the central North Island, eastern Bay of Plenty to northern Manawatu and Hawke's Bay from this afternoon.

A heavy rain warning for Mt Taranaki today has been lifted.

Meanwhile, a severe weather warning has been issued for the eastern and southern parts of the South Island where up to 130mm of rain is forecast in the Canterbury high country and Kaikōura ranges.