GNS scientists have detected a series of slow and silent earthquakes of unprecedented scale, triggered by the Kaikōura quake. 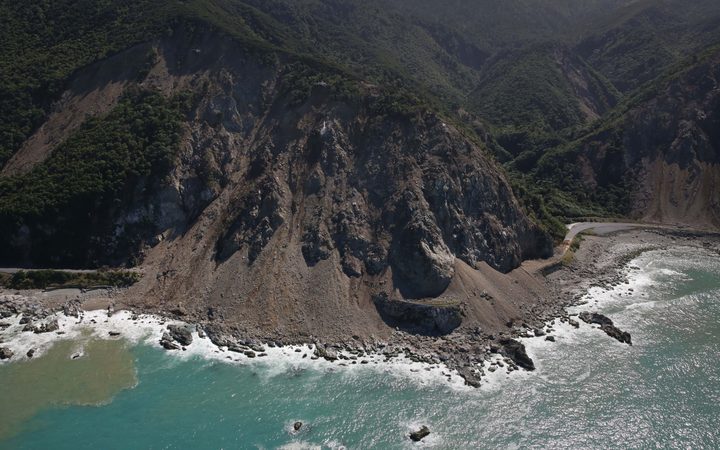 This landslip - on State Highway 1 north of Kaikōura - is more visible and disruptive, but covers a smaller area, than the underwater slow slips. Photo: RNZ / Rebekah Parsons-King

New research shows November's magnitude 7.8 Kaikōura earthquake sparked a series of what are known as slow slips on part of the subduction zone beneath the east coast of the North Island.

GNS said it was the largest and most widespread episode observed in New Zealand since scientists first recognised the phenomenon in 2002.

GNS seismologist Yoshihiro Kaneko said unlike a normal earthquake, where movement between two pieces of the earth's crust lasts seconds, a slow earthquake unfolded over weeks or months, and faults moved about a centimetre per day. 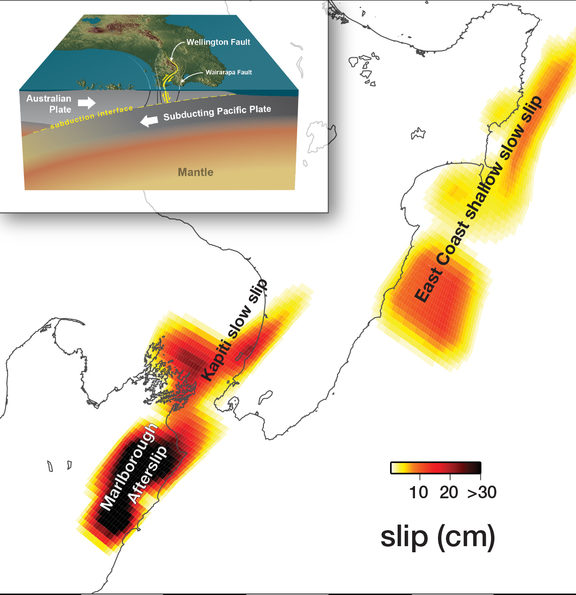 An illustration of the slow slips that occurred after the magnitude 7.8 Kaikōura earthquake in November 2016. Photo: Supplied

The slow slips occurred within days of the Kaikōura quake, 15km deep below seabed, and spanned more than 15,000 sq km off the Hawke's Bay and Gisborne coasts.

Dr Kaneko said the area was about the size of New Caledonia.

"The scale of the slow-slip motion is [unprecedented]. Previously in New Zealand there has been a sequence of slow motion earthquakes but this particular event happened right after the Kaikōura earthquake, almost within a day, and it was so widespread," Dr Kaneko said.

A slow slip was also triggered beneath the Kāpiti Coast region, and there was up to half a metre of post-earthquake afterslip under Marlborough, he said.

Both slips were still continuing today, but have slowed substantially over the last few months.

"This is probably the clearest example worldwide of large-scale slow slip being triggered over long distances by seismic waves from a large earthquake.

"One of the most intriguing factors is that the quake-triggered slow slip off the Gisborne coast [was] up to 600km away from its epicentre in North Canterbury."