Mongrel Mob men carrying out their own search for two of their "brothers" lost in Kaimanawa Forest for nearly a week say their information is being ignored by police. 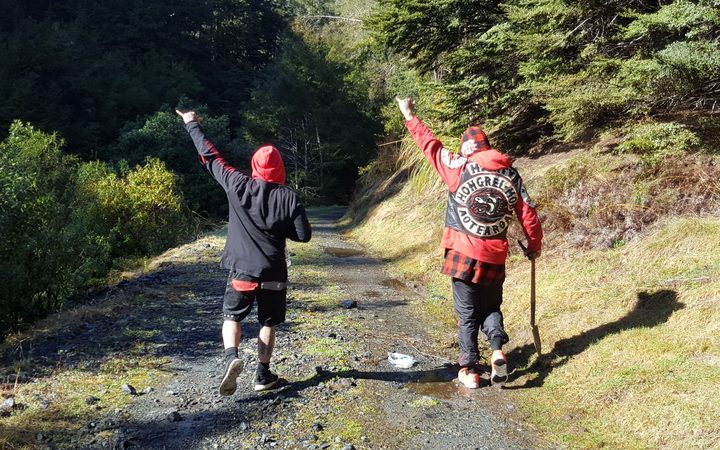 Members of the Mongrel Mob search for two of their friends, lost in the Kaimanawa Forest since the weekend. Photo: RNZ / Robin Martin

The men fled into forest at the boundary of Tongaririo National Park after a police pursuit on Saturday, but called 111 the following day asking to be rescued.

He said they had been disappointed with the police response so far.

"Like, they are only drip-feeding us information when we are trying to tell them we've found the 'dogs markers' [gang markings]. Our brothers left markers up there.

"We're telling them that and they're not even saying anything, and no one's gone up there 'cause it's still as it was when we left them."

Mr Wahanui said he was happier with search efforts today, but police had taken too long to bring in the dive squad and the helicopter that was supporting them today.

Another Mob member, who only wanted to be know as Clevedon, was more critical.

"The police haven't really been helping at all. They're coming out now on sunny days and its been six rainy days, and we ain't seen them for the last three rainy days that we've been out here.

"Our brother could be lying somewhere dead. They chased them into the bush for a car. A car is something they can replace, you know. Our brother's life is not."

Yesterday, friends and whānau of the missing men were asked to stay out of the search area because they risked contaminating the site.

Police said today they had "protocol and criteria" they had to go through in the search.

The officer in charge of the search, Tony Jeurissen, said police were in constant contact with the men's families, and they understood the delicacy and complexity of the situation.

"We've had open communication with the whānau - key members of the whānau we meet twice a day, every day.

Mr Jeurissen said this was a highly unusual situation, but rescuers were provided with all the equipment and resources necessary for the job. 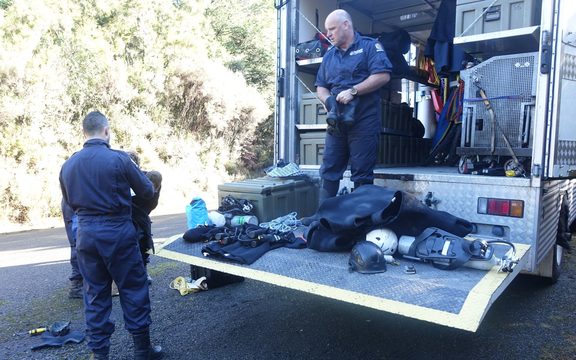 The police dive squad prepare to search for the two men lost in the Kaimanawa Forest. Photo: RNZ / Robin Martin

Today the police dive squad has been operating in the Tree Truck Gorge Road area.

Senior Sergeant Bruce Adams, the officer in charge of the squad, said two two-man dive teams were being dropped by helicopter at tributaries of the Tongariro River.

"Essentially we're going to be getting in the rivers, getting in the streams and checking all those because you can only see so much from the surface.

Mr Adams said his team would be looking to make the most of the benign conditions in the search area today to check as many waterways as possible.

Mr Jeurissen said there had been no thought of calling off the search, which was heading towards its seventh day.

"It is not even a consideration yet. There's a protocol and criteria we have to go through and while we're still finding things and still got things to do, we aren't able to suspend the search."

Mr Jeurissen said police were confident search teams would be able to return the men to their whānau.

Clothing and shoes belonging to the two men were found earlier in the week, and the police said they were worried the men would be hypothermic and delirious.

Mr Jeurissen acknowledged the assistance provided by representatives of Ngāti Tūwharetoa, who had supported searchers and the missing men's families throughout the week. 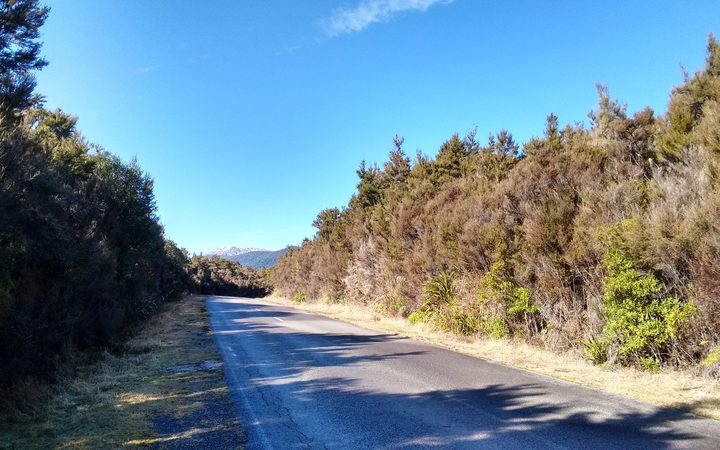 The view from Desert Rd along Tree Trunk Gorge Rd, towards the area where the men went missing. Photo: RNZ / Janice Swanwick