The neighbour of a Whangarei woman who lay dead in her bedsit - possibly for weeks - says mental health services need to explain why no-one knew. 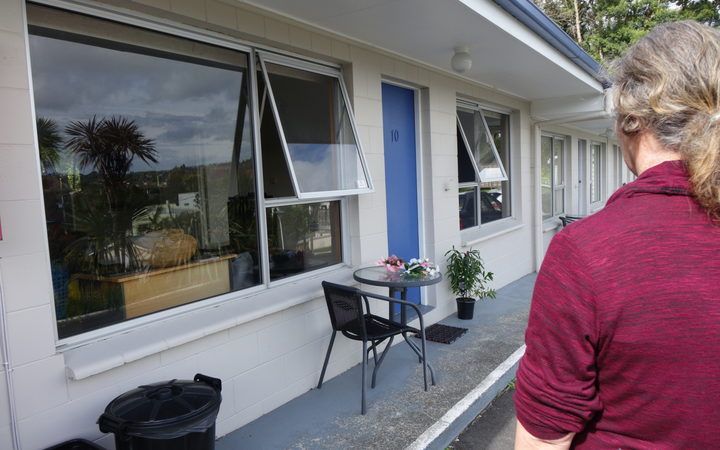 Donna looks on outside the unit where her neighbour's body lay undiscovered until last Friday. Photo: RNZ / Lois Williams

Donna, who has asked RNZ not to use her surname, had not seen her neighbour for several weeks when she arrived home last Friday to find the apartment complex swarming with police.

Whangarei police confirmed they removed the body of a 49-year-old woman from a unit in Tarewa Road, and said it was likely she had been dead for some time.

Northland DHB confirmed the woman was under the care of its community mental health team.

The former motel complex where she lived is home to several tenants living independently but receiving support from the team and a brain injury trust.

Donna, who is also a client of the DHB's mental health service, said she and other residents at the units were struggling with the thought their neighbour was lying dead in her home and no-one noticed.

"I hadn't seen Caroline for three or four weeks. She wasn't sitting outside smoking, or being picked up to go shopping, and I thought she must have gone into respite care," Donna said.

She said it was not uncommon for residents to disappear suddenly and take time out in hospital or respite care if they were unwell.

Her neighbour was on psychiatric medication and was a fit and active person, though she seemed sad, she said.

"I know, because I had spoken to her, that she had had a partner who had died ... who she really adored, so she was missing him terribly and I think she depended on him to pick her up ... from these bouts of depression and he wasn't there any more."

Last Friday, when Donna was at her drop-in centre, a social worker called in and asked her when she'd last seen Caroline.

It had been weeks, she said.

The social worker left immediately, and a few hours later a mental health nurse arrived to take her home, warning her that there'd been a death and the police might want a statement.

Specialist clean-up teams stripped out Caroline's unit, removing the bed and her body, while stunned residents tried to make sense of what had happened.

"There's no reason that I can see for this gap ... this lapse in care," Donna said. "I'm thinking signs were there that were missed or passed over."

She personally felt supported by Whangarei mental health staff, but her faith in the service overall had been shaken by what happened, she said.

"I would like ... [that] maybe mistakes like this are talked about, which is why I really want to talk about it," she said.

"It's not normal to leave someone dead in a flat like this. It's very emotional for us to process and I wouldn't like to see it happen again.

The DHB said the death has been referred to the Coroner. It has so far been unable to provide further comment from its mental health team.