An organisation helping young men turn their lives around says it is more effective than a military camp, but is struggling to get funding.

The National Party wants to send 50 young criminals each year to a training academy at the Waiouru Military Camp.

Prime Minister Bill English has rejected the label 'boot camp', saying the young people sent there will get literacy and numeracy training as part of the programme.

Terry Poko is the Kāpiti area manager for YouthQuest.

His organisation doesn't manage the hardened criminals facing up to 14 years in jail that would be the focus of National's scheme.

But its clients are wagging school and beginning to get in trouble with police.

When the programme started 11 years ago, the manager at the time had a military background and took an authoritative approach with the boys, Mr Poko said.

When he became manager, he took a softer approach.

"I watched that for a number of years, so when I was in charge of operations I changed that. We could still get the same result without all the shouting.

"The better approach was to keep the boys involved. I guess the army approach was ... 'What are we doing today?' 'Don't worry about it.'"

Police, schools and parents struggling with misbehaving boys are referred to YouthQuest, which offers an intensive six-week course including one week in the bush.

The programme keeps tabs on the boys for the next 12 months, and Mr Poko said there had been some great successes.

Just four of the 300 boys they had worked with later ended up in jail. One of the boys now had a roofing business and was on the verge of buying a house, he said. 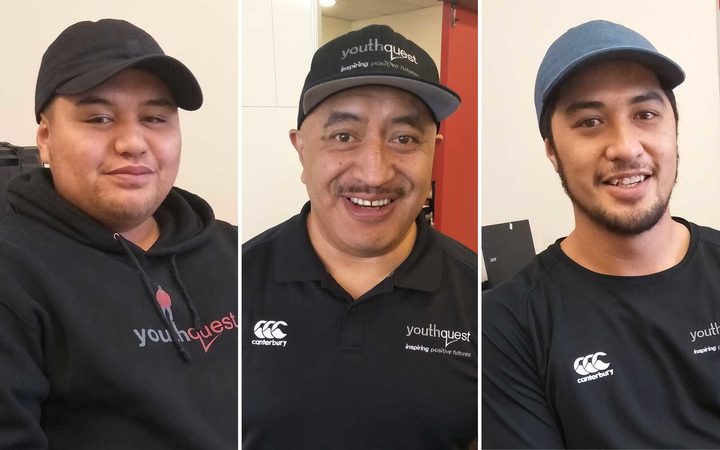 The programme just missed out on $50,000 in contestable funding from the Ministry of Youth Development, and Mr Poko said its survival was up in the air.

"It's been like that for a while. If money was poured into our programme it'll go a long way to saving the country money and also helping more young men."

One of YouthQuest's success stories is Piripi Wallace, 17, who had stopped attending school and started dabbling in drugs and alcohol.

"No showers, just listening, bridges, not allowed to swear, all sorts. slowly turned my life around, went back into school, couple more years."

He now works as a volunteer for YouthQuest, preparing gear for future bush trips.

His brother, Adrian Wallace, is passionate about working for YouthQuest and has been tutoring boys like his brother for nearly three years.

He said the military approach was very unlikely to work.

"Some of these boys at risk have been yelled at all their lives and that obviously hasn't changed them.

"Some people just need somebody who's there for them ... and that's what working for us. I don't know about all the authoritative stuff. All the yelling ... I wouldn't react well to it."

The RSA, however, was backing the National Party's proposal.

RSA national president BJ Clark said he had overseen the training of hundreds of young people in military-style courses in previous roles in the army.

"It actually teaches people to work as a team. Teaches them that they can achieve things that they may not have thought before.

"It teaches them to get up and look after themselves and clean themselves.

"What I saw ... was young people who went home on leave midway through their training ... we had parents coming up to us and saying, 'What did you do to my son? He came home and tidied his room up.'"

Mr Clark said if the boot camp idea worked for just two or three young people out of the 50 that would be sent there each year, it would be a success.

He said if the programme was to be done correctly then it must also be resourced properly.