Greenpeace protestors who chained themselves to machinery and pipes at a mid-Canterbury irrigration scheme early this morning have come down. 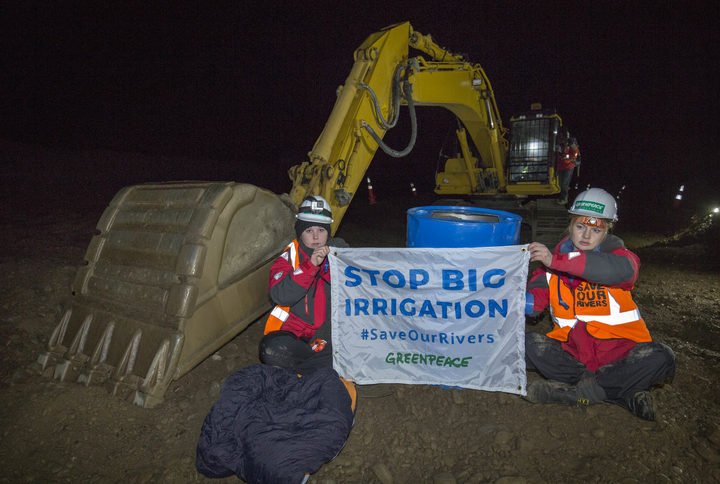 The seven activists were opposing public money being spent on the Central Plains Water (CPW) scheme, which they say will allow further polluting dairy cows to be farmed on the plains.

The activists left mid-evening as temperatures dropped to near zero.

Greenpeace spokeswoman Genevieve Toop said the activists accomplished their goal of stopping construction, and they would be back in future.

The second stage of building the CPW scheme began in May. The scheme is intended to irrigate 60,000 hectares of dairy, horticulture and stock between the Rakaia and Waimakariri Rivers.

Canterbury regional council estimates the nitrogen load in the Selwyn-Waihora catchment will go up from 3200 tonnes a year to 5600 tonnes once the scheme is complete.

Seven of the 17 protestors chained themselves to pipes and machinery at the construction site for the Central Plains Water Scheme at 3am.

Ms Toop said they were taking a stand because irrigation schemes like the Central Plains Water scheme will only lead to further intensification of dairy farming.

"We'll be here for as long as we think it takes for the National government to get the message.

"Half a billion dollars set aside for think-big irrigation schemes in the middle of a national freshwater crisis is a bad idea for our rivers and we need them to end those irrigation subsidies immediately."

Two of the protesters were locked to the digger that would dig the trench for laying the irrigation pipes.

Three more were locked to machinery that would move the pipes and two others were inside one of the 2.5m pipes.