Lyttelton residents are calling for New Zealand's second longest road tunnel to be cleaned up, but the Transport Agency says it's already doing all it can. 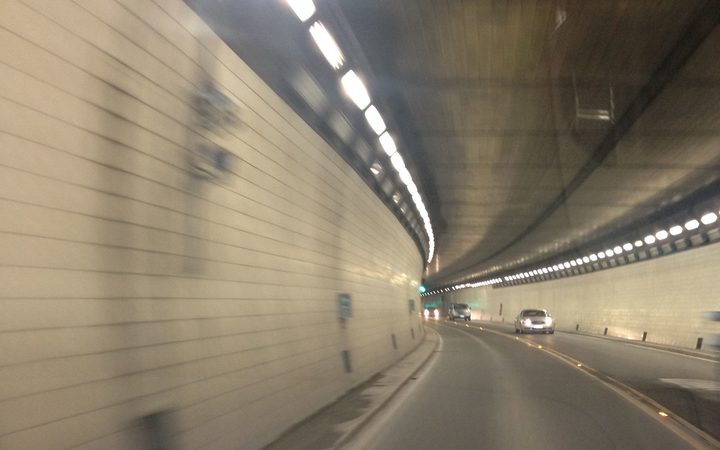 The Lyttelton Tunnel, in Christchurch, is 1.9km long, and is the main route to the city's port. The tunnel survived the 2011 Christchurch earthquake, but the other main road into Lyttelton, Sumner Road, was badly damaged and has been closed since.

All vehicles, including those servicing the Lyttelton Port, now have to travel through the tunnel.

Lyttelton resident May Rose Bryant said the tunnel's condition was not what it used to be.

"It used to be a buttery yellow, the tiles reminded me of the London Underground," she said. "Now the ceiling is blackened and the walls are streaked with what is clearly water damage."

She said she believed the grime would get to a point where it would be very hard to remove.

Lyttelton Community Association chairperson Ken Maynard said the increased traffic had made the tunnel filthy, and not enough was being done to keep it clean.

Mr Maynard said it was not a good look for people wanting to visit the seaside community.

"You like to have a certain pride in the place you live, and this doesn't help," he said.

Mr Maynard said the tunnel was now an embarrassment.

Transport Agency: Tunnel needs to be open "as much as possible"

The Transport Agency, which is responsible for maintaining the Lyttelton Tunnel, admitted the tunnel was not up to acceptable standards of cleanliness.

Currently, the walls of the tunnel are "washed" every three weeks, and a sweeper truck cleans the kerbs once a week.

But Transport Agency maintenance contract manager Barry Stratton said keeping the tunnel open was the priority, as cleaning the tunnel reduced it down to one lane.

"We need to keep the tunnel open as much as possible for people coming to and from Lyttelton, in particular overnight shift workers," he said.

In an effort to reduce pollution, the Transport Agency introduced a bylaw in September 2016 that compelled truck drivers to cover their trailers.

Mr Stratton said the bylaw had made a difference, reducing the amount of dirt found in the tunnel by half, but there was still considerably more than before the earthquakes.

Statistics from the Transport Agency reveal that up to eight tonnes of dirt and dust is cleaned out of the tunnel each month, up from 235kg a month before 2011.

Mr Stratton said there had also been problems with the cleaning machines, with a water pump malfunctioning last week. This resulted in the west wall of the tunnel not being cleaned properly.

But the Lyttelton Community Association's Ken Maynard said the Transport Agency had had a long time to sort out these issues.

"The earthquake was six years ago ... it just doesn't create the right impression," he said.