Five years after being seriously damaged in the Christchurch earthquakes, part of a crucial road in the Port Hills that links Sumner to Lyttelton is being repaired. 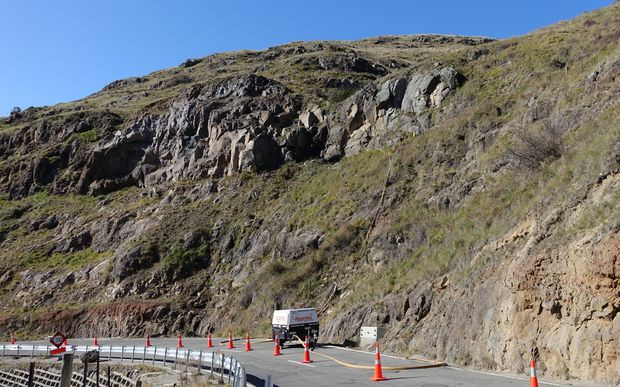 The Stronger Christchurch Infrastructure Rebuild Team is currently undertaking a complex repair job to a 60m retaining wall along Evans Pass Road, which requires stabilising any loose rocks hanging from the cliff face above.

The work is part of a bigger plan for the whole Sumner to Lyttelton corridor, which is an alternative route to the Lyttelton Tunnel.

The Port Hill's rugged landscape meant a helicopter was needed to drop off important drilling equipment to a team of technicians, who have been abseiling the front of the cliff face, drilling and pinning rock anchors into the slope in an effort to stabilise any rocks which loosened in the 2011 quakes.

"If you look over to the existing retaining wall it looks a bit of a bomb site really because obviously the cliff face above the road, in the earthquakes we had a lot of rock that came down, smashing onto the road and predominantly that was the damage to the existing concrete crib wall." 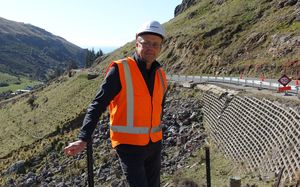 The $1.7 million repair job on Evans Pass Road, which is open to the public, is small compared to the more than $40m it's expected to cost to fix the other half of the corridor, Sumner Road, which has been permanently closed since 2011.

Rebuild team delivery manager Tim Mason said it was a small project but was an important part of bringing the corridor back to life.

"It's certainly not the largest project that we've completed, but it is really important in regard to access over to Lyttelton, but also really important for the people of Christchurch who access the Port Hills and use it for recreation, particularly the cyclists."

The Port Hills area is also an important habitat for five gecko and skink species, two of which are native to Canterbury.

Mr Yorke said to reduce the impact rockfall could have on the species, some were relocated before the job started.

But not all of the lizards could be caught and changes had to be made to the project.

"Because of the time of the year they have all recessed back into the cracks [of the rocks] so they're hard to catch. But we've changed our working methodology, we were going to blast the rocks at the top but because of the geckos we're not blasting it now, we're just doing some hand scaling and drilling ... so we've reduced the impact of disturbing the geckos."

Christchurch City Council Head of Transport Chris Gregor, said he was confident any potential impacts on the species were being minimised.

Mr Gregory said a contract to fix Sumner Road had been awarded to the engineering and construction company McConnell Dowell, who were now looking into what kind of repair work needed to be done.

"McConnell Dowell are now carrying out some further investigation work, just to confirm some of the assumptions and then they'll start protecting that corridor, probably in a couple month's time."

Mr Gregory said work on Sumner Road should take about 20 months, with the corridor expected to be fully reopened in 2018.