It's hoped a new easy-to-remember, four-digit number will encourage more people to get help for mental health and addiction problems.

The number is free to call and text, and is available 24/7. Trained counsellors will be able to offer immediate support, and refer people to primary and secondary mental health and other services if they need them.

Dr Coleman said the number was a single entry point to a range of existing depression, alcohol and drug, and gambling hotlines.

"Research shows that four digit numbers are easier to remember, and that they can attract a wider range of people who may feel other specific lines are not suited to their needs," he said.

"The same trained mental health professionals who currently respond to calls, texts, webchat and emails across the existing National Telehealth Service mental health and addiction helplines will be on hand to support people who call or text 1737."

Dr Coleman said demand for mental health services had increased significantly in recent years and it was important to come up with innovative ways to ensure people get the help they needed.

"It's really important, as we meet that demand, to continue to do things differently, and one of the ways we're going to be doing that is increasingly using new technology in new and different ways," he said.

In addition to the 1737 number, the government is continuing to roll out the early mental health response service.

The service was currently operating with the police north of Waikato, and will be fully implemented by the end of this year.

Dr Coleman said once it was up and running across the country, the service would give police and ambulance staff the option to transfer 111 callers who needed non-urgent social or psychological support to a 24/7 mental health nursing team for assistance.

Inspector Mal Schwartfeger said there had been an increase in the number of people calling police with mental health-related problems.

"We're police officers, we're not mental health experts, so this new service is a really good opportunity for us to put people who are in need of support when they're in some form of mental distress, in touch with mental health professionals."

Mr Schwartfeger said it was early days, but he hoped the service would ease some of the pressures on frontline police officers.

"If we're putting people through to get the appropriate help from the emergency mental health response service, that will mean we're not necessarily tied up on the phone talking to them, we can answer the next emergency call, and we're not necessarily sending a frontline car to do some work with them, because they're getting the right help from the mental health professional."

Almost half of all New Zealanders will experience a mental health issue in their lifetime, and one in five will meet the criteria for a mental health diagnosis in any given year. 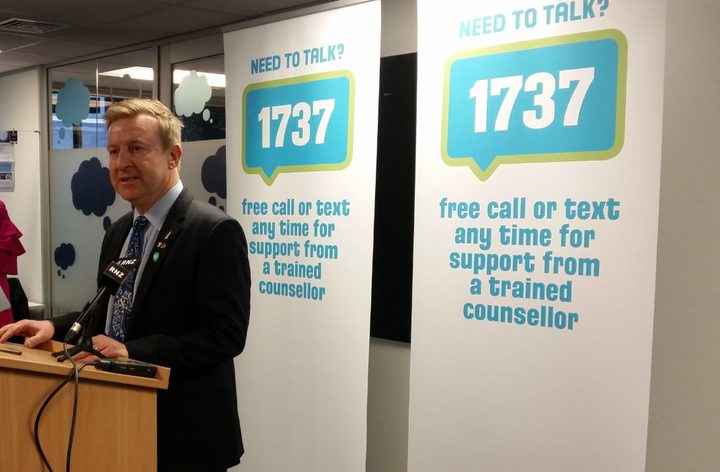 Jonathan Coleman at the launch of the new 1737 number. Photo: RNZ / Sarah Robson

Youth mental health advocates said the new number would go some way to breaking down barriers to accessing help.

Genevieve Mora and Jazz Thornton have both struggled with mental illness in the past, and set up the non-profit organisation, Voices of Hope, to help others.

Ms Mora said being able to text would make it easier for some people.

"One of the hardest things is to pick up the phone and say 'I'm not ok, I need help'. If you've got a number where you can text, it's straight to the point, there's none of this 'Hi, how are you? How's your day?', you can say, 'I am not ok and I need your help'."

Ms Mora said it was good that there would be some follow-up support for people who needed it.

She said people still need to be encouraged to seek help, even if it simply using a number like 1737.

Although there were mental health helplines out there already, Ms McSweeney said there was a stigma around using them.

"It's quite a scary thing to call the depression helpline, no one wants to be like, 'oh my gosh I'm so depressed I need to call a helpline'. I think the strong stigma that is around depression might be a barrier for people to call that," she said.

"I think that ['Need to Talk'] messaging means it's going to reach more young people because it's not about saying this is for people with depression, it's about saying, look, we all need to talk to someone sometimes."