Some Wellington residents are worried a proposed water reservoir could fail in a big earthquake, causing a potentially deadly landslide.

The reservoir would be built at Prince of Wales Park, in the protected Town Belt, and would contain 35 million litres of water.

The city's councillors today voted to send the proposal out for consultation, and if it gets the green light construction should begin next year.

The council said it was an important resilience project to prevent the city failing in an earthquake.

David Tildesley, who lives next door, said he was worried it would not be built well enough to survive a large earthquake.

The reservoir would need to go underground, due to the rules protecting the Town Belt.

It was proposed that some of the spoil could be spread across two nearby playing fields, raising them by 1.5m. 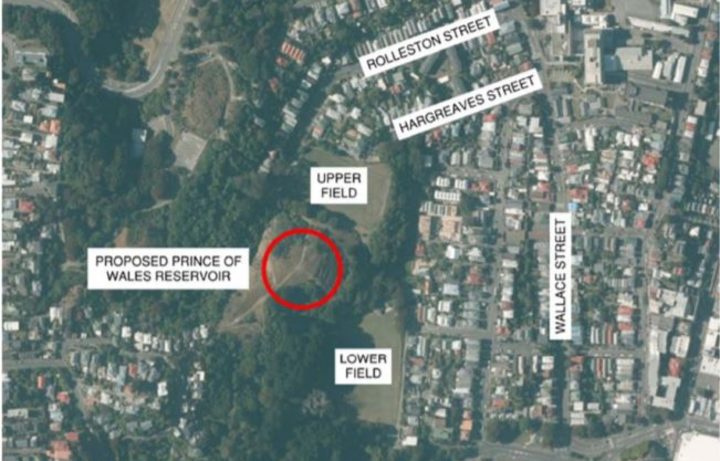 The proposal would place the Prince of Wales/Omāroro Reservoir here. Photo: Wellington Water

Mr Tildesley said that was also a problem.

"It impacts water table pressure and seepage under houses, but most importantly impacts the existing privacy of houses.

"So we have sports fields with people straight down into houses, as opposed to at the moment peering up and not being able to see into the house," he said.

Mary Hutchinson, a member of the Papawai Restoration Group, said the group planted natives in the riparian strip alongside the Papawai, one of the city's few open streams.

The stream runs through the park, adjacent to the work site, and Ms Hutchinson said she feared runoff on wet days could smother it.

"[In the stream] there are koura, which are freshwater crayfish, and these are endangered in New Zealand," she said. "There are also native fish called banded kokopu.

"We are very concerned that the excavations and the inevitable runoff that happens with rain, and natural drainage of the area, will impact on the stream so as to destroy the habitat."

'We need to provide water resilience'

Iona Pannett, the councillor with responsibility for infrastructure and sustainability, said the council was aware of the residents' concerns about the engineering.

She said the streams and surrounding area would be protected.

"We don't have enough water storage facilities at the moment, but the Town Belt is sacred in this city almost. And we need to make sure any impacts on it are temporary and that the land is remediated, and in fact it should be improved after the work's been done."

Wellington Water said building a 35 million litre reservoir in Prince of Wales Park would, with rationing in an emergency, give the city an extra 10 days of water, taking it from 20 to 30 days' supply - but residents would still need seven days' personal supply.

Despite its apparent importance, the proposal is still $12 million short. Ms Pannett said the council was talking to central government.

"We can also look in our own budgets, essentially the project does need to go ahead in some shape or form, we need to provide for water resilience, so we will find the money."

Infrastructure Minister Steven Joyce said in a statement core freshwater reservoirs were "a core responsibility of local government that they need to be planning for and investing in through their long-term planning process. The government has no plans to take over that responsibility".

The government was looking at ways to support the council to attract more outside funding, "but this is primarily targeted towards new infrastructure that expands areas available for new housing," he said.