Rapid checks on Wellington buildings after the Kaikōura earthquake missed serious hidden damage in 11 of them, according to a new report. 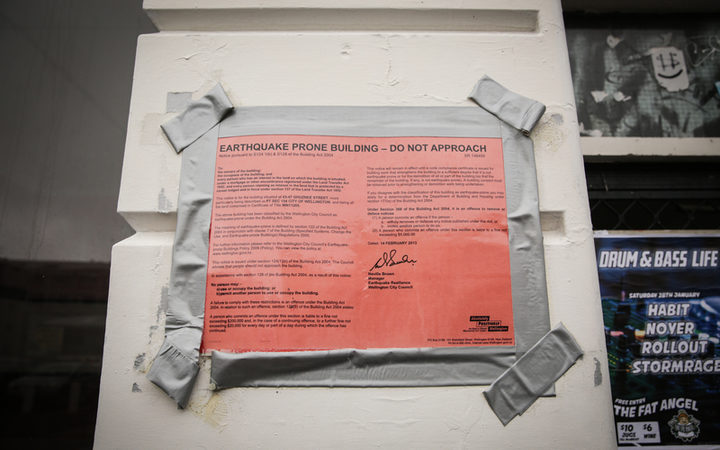 A file photo of a red sticker: More than 1200 buildings in the capital city were checked after the 14 November 7.8-magnitude earthquake. Photo: RNZ / Rebekah Parsons-King

The Wellington City Council report (PDF, 1.3MB) shows the critical damage was only picked up because of extra tests weeks later, which were more in-depth.

The council said it was extremely concerned and has immediately adopted the report's recommendations to get experts to look into the checks.

It has not identified the 11 buildings.

Two suffered widespread floor and frame damage, and repairs or propping have been done.

About 200 engineers worked across the capital in the first two weeks after the 14 November 7.8-magnitude quake, looking for telltale clues to structural damage, eventually carrying out rapid checks on 1200 buildings.

Extra checks were ordered in early December on 72 buildings that most resembled the worst-hit Statistics House.

Today's report to the city council showed that the more invasive tests in December found critical damage in 11 of them.

Two of the 11 damaged buildings had widespread frame and floor damage. None of the 11 were critical buildings such as hospitals or schools.

Council resilience officer Mike Mendonca said the council had immediately adopted the report's recommendation for experts to look into the process.

"It's a big enough worry to warrant further investigation from local and central government, and the engineers, so we're extremely concerned about it."

He would not confirm if the 11 buildings were reoccupied in November after the rapid checks cleared them.

The law under which the council ordered private building owners to do the invasive tests - which was passed only in December - made the entire process confidential.

Paul Campbell of the Structural Engineering Society said it did not mean the public could not trust rapid checks.

"Absolutely not. The rapid assessments are a very quick, visual look at a building and they are indicator-only. It is expected that not all aspects will be picked up."

It would be a worry if engineers had missed obvious clues, but that had not happened in this case, he said.

The Ministry of Building Innovation and Employment (MBIE) has developed guidelines for carrying out rapid building usability assessments and said it would look at what lessons could be learnt from the Kaikōura earthquakes to improve this process.

This would include examining the impact the earthquake had on multi-storey buildings in Wellington.

Mr Campbell has helped MBIE train 400 engineers and building officers in rapid checks. He said tweaks could be made, and the ministry said it would look at how to improve assessments.

Structural engineer Dave Brunsdon, one of the authors of today's report, said the process needed be tailored a bit, to the more complex, multi-storey buildings.

It took three weeks to order the invasive tests as engineers studied the failings at Statistics House.

Mr Mendonca said if more buildings were fitted with quake sensors that measured the power of the shaking, that timeframe could be slashed - to as little as 24 hours.

Mr Brunsdon's report also recommended setting up an expert panel to assess the results from sensors.

"The early feedback from those into the emergency operations centre would give that early understanding of, firstly, the types of structures most affected and, secondly, whether the rapid building assessment programme needs to be modified to pick up the damage in those buildings."

The Wellington City council is trialling sensors in 10 of its own buildings, and is aiming to get 400 buildings fitted out with them, at a cost to private owners of more than $50,000.

Today's report also shows that most of the worst damage to the 72 buildings was to precast concrete floors, with calls for urgent research into how these cracked.