Friendly bus drivers, growing vegetables in their garden and a welcoming community have helped a Syrian refugee family settle in to their new life in Dunedin. 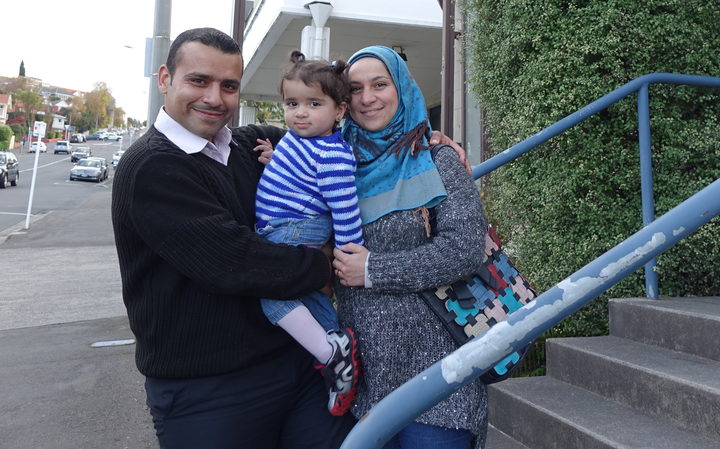 Zeina and Ghazwan Al Ashkar arrived in Dunedin 10 months ago and live with their 18-month-old daughter Julia in Green Island.

The Al Ashkars are among about 50 refugee families that have settled in Dunedin in the last year, as part of a special emergency intake.

The one-year anniversary of the first refugees' arrival has been marked by Southern District Health Board putting an extra $1.34 million towards support services for the new arrivals, including primary health care, interpreter services, mental health support and dental services.

In Syria, Mrs Al Ashkar was a periodontist and her husband was a pharmacist.

Both face years of retraining to use their skills in New Zealand and Mr Al Ashkar said they could not wait to work again.

"I know so many Syrian men and women who want to do something positive [for] this community... This community gave us everything."

The couple said they loved their new house, growing vegetables in their garden, and the friendly bus drivers who lowered the floor for Julia's stroller.

Mrs Al Ashkar said she was surprised by how welcoming Dunedin residents had been.

"Everyone was understanding, everyone was compassionate with us... We felt like we're home."

Mr Al Ashkar said the main barrier for many Syrian families was learning English, but their children studying in Dunedin schools took their new-found language skills home and taught their parents.

The support offered by Red Cross workers meant the couple had faced minimal obstacles settling into their new city, but they were lucky because they had a good knowledge of English and could interact easily with people, they said.

Not all of the new residents were so lucky - Southern DHB's patient affairs manager Wesley Bachur said the demand for interpreter services at medical appointments had increased tenfold in the past year, from around 18 appointments per month to more than 200.

Most of the demand was for Arabic-speaking interpreters, many of whom were members of the community or graduate students fitting the task around their daily lives, he said.

Dunedin city councillor Aaron Hawkins, who heads the Refugee Steering Group, said challenges remained around how much social housing was available in Dunedin for new refugee settlers and existing Dunedin residents, and that needed to be addressed by the government.

However, that was not an excuse for Dunedin to "shirk our responsibility to help during the greatest humanitarian crisis since World War II".

Red Cross southern humanitarian services manager Sue Price said the demand for their help meant her Dunedin office had hired at least 11 new staff in the past year and countless volunteers had come forward to offer support.

"The offers of help, the offers to just engage with people have been enormous, and now we've got former refugees who are offering to volunteer themselves and have only been here a year."

Immigration New Zealand announced last week that Invercargill would be the seventh resettlement location and Ms Price said she was confident the southern city would prove welcoming, despite comments from mayor Tim Shadbolt that he had not been consulted over the decision.

"When Dunedin was announced as a resettlement location there were people from Southland who wanted to know how they could help because they're Otago's neighbours and they were just so pleased to have something close by."