Most of the first eight charter schools are good at teaching and testing children from Māori, Pasifika and poor backgrounds, an independent evaluation says.

The report into charter schools - the second of three - found that their teaching approaches and assessment practices were mostly good. Photo: 123RF

The report (PDF, 2.8MB) by the firm Martin Jenkins for the Education Ministry said most of the children enrolled in the schools were from high-priority backgrounds and many had previous problems with achievement and attendance.

"All schools/kura report that high proportions of their students have poor achievement histories and are achieving below the age/stage-related standards that could be expected on entry to the school/kura," it said.

It said the schools showed mostly good and in some cases innovative practice in their approaches to working with the children.

It also said their assessment practices were good.

"We are confident that all of the schools/kura are either already delivering, or are on a path towards delivering, assessment practice that is 'good' or 'very good' overall."

The report said literacy and numeracy dominated the curriculum of all of the schools and most had average or lower than average class sizes.

It said in 2015 most of the schools met or exceeded their contracted targets for student attendance, engagement and achievement.

The evaluation said most of the schools said their reporting requirements were burdensome, and some said they had unresolved contract issues and/or a complex relationship with their key partner, the Education Ministry.

"These issues have at times diverted attention and resources away from delivery," it said.

The report was the second in a series on charter schools and looked at the eight schools set up in 2014 and 2015.

A third report would evaluate the schools' performance. 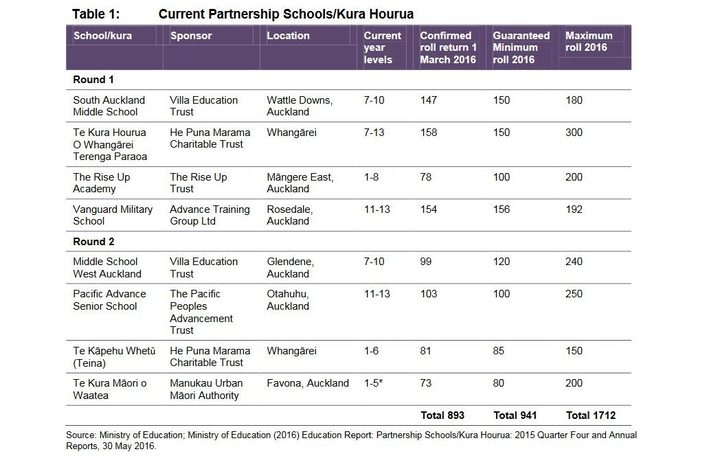