Farmers in Hauraki are helping hundreds of cows stranded in flooded paddocks swim to safety. 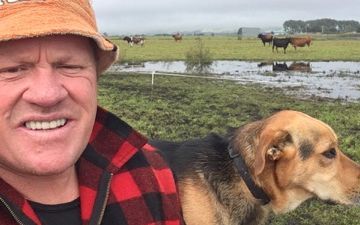 Morrinsville Federated Farmers chair Stuart Husband and his dog Buck have been helping cows swim to safety on the Hauraki Plains. Photo: Supplied.

The farmers have had to rescue stranded stock after two storms in a fortnight caused heavy flooding in the region.

Morrinsville Federated Farmers said three farms in the Patetonga area had stranded stock today, but there were likely to be many others in the Hauraki Plains.

Chair Stuart Husband said the water was over the heads of some of the cows on a farm where he was this morning, so farmers had to encourage the animals to swim.

"Cows can swim, but they just don't like swimming. But when pushed, they will swim.

"We sort of swam across, to get the dog across, and then pushed them out through the paddock."

Mr Husband said the group had moved about 250 cows this morning. 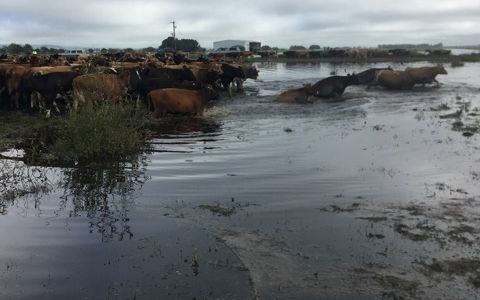 Cows stranded in flooded paddocks in Hauraki Plains had to swim to safety. Photo: Supplied.

There could be hundreds of farmers in the Hauraki Plains area that were in need of help following the flooding, Mr Husband said.

Up to two-thirds of the paddocks were under water on some farms and it might be a year before they got more grass growth.