A state of emergency has been extended to the entire Bay of Plenty, with up to 250mm of rain forecast for the sodden region over 48 hours. 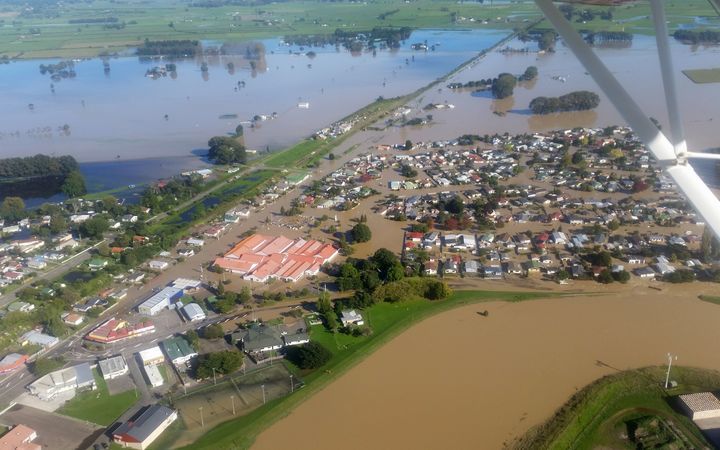 A view from the air of the Edgecumbe flooding, which forced the town's 1600 residents to leave their homes last week. Photo: RNZ / Sharon Brettkelly

A low pressure system followed by the tail end of Cyclone Cook are expected to bring heavy rain to the region, with a severe weather warning in place.

It comes less than a week after the town of Edgecumbe was inundated.

Bay of Plenty is forecast to get up to 250mm in the 48 hours from midday Wednesday.

It meant the emergency response would be coordinated at a regional level.

The Ministry of Education said all 57 schools and about 80 early learning services in Whakatāne, Opotiki and Kawerau would be advised not to open on Wednesday.

He said residents should stay up to date with the latest weather information.

"This is a changing environment, we'll be tracking Cyclone Cook and depending on her tracking obviously will be advising according to that. But stay alert."

Follow Cyclone Cook's path towards New Zealand. The LIVE map below is provided by Esri.

The levels of the Matahina Dam would be dropped and flood walls reinforced to try to protect Edgecumbe from more devastating flooding.

The Bay of Plenty Regional Council has set a 71.6m target for the dam lake's level, which is the minimum level allowed under its resource consent.

The lake is lowered by spilling water through controlled releases.

Trustpower said the target was reached before the severe weather brought by the remnants of Cyclone Debbie last week, and would be reached again before Cyclone Cook hit.

It said contractors were removing logs and debris in a purpose-built log boom to prevent the spillway gates being blocked.

The Defence Force has sent 23 extra soldiers to Edgecumbe to help with security.

Air Commodore Kevin McEvoy said the Army Reservists, backed by two trucks and two other vehicles, were sent after a request from the Whakatāne Emergency Operations Centre.

Earlier, MetService said a low coming from the Tasman Sea, due to hit from tomorrow, would be blocked by a high pressure system, making the rain slow to move away.

"The area that's probably going to get most hammered in the coming few days from that Tasman Sea low [is the] Bay of Plenty.

"But of course anywhere in the upper north of the both islands is going to be wet. This is a repeat pattern - the fourth or fifth in five weeks."

Bay of Plenty Regional Council chairman Doug Leeder said he was "most definitely" worried about the next bout of rain. 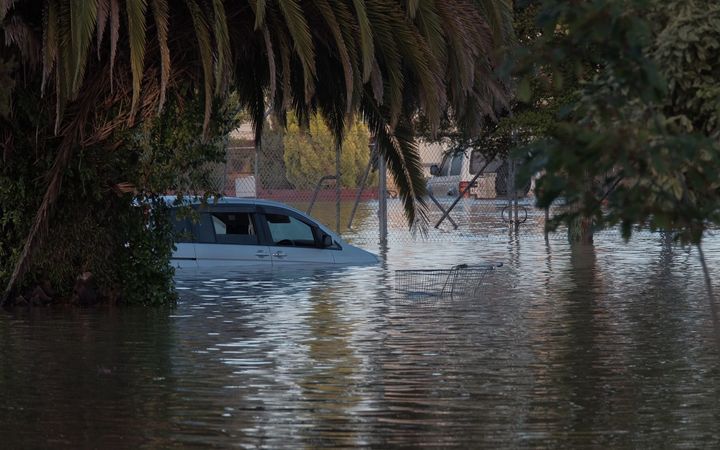 A car submerged by flooding in Edgecumbe on Friday. Photo: RNZ / Brad White

On a helicopter flight yesterday he saw significant damage further up from Edgecumbe.

"We're trying to do an assessment as to, if we do have a significant rain event, does that pose a breaching risk further up?

"Clearly with the weather as it is, we won't have the opportunity to to get in and fix it, but I'm confident that the river management people will be looking at the forecasts and will be trying to plan for different scenarios."

As well, Cyclone Cook might pass close to, or east of, the North Island on Friday and was likely to affect Bay of Plenty and Gisborne.

MetService was warning there could be gales in Coromandel, Bay of Plenty, Gisborne and Hawke's Bay.

The forecaster would become the "alerting authority" on the cyclone from early Wednesday and would be looking at the track and timing of the storm, Ms Griffiths said.

Heavy rain is expected in Bay of Plenty from Wednesday. Photo: MetService