The Bay of Plenty Regional Council is commissioning an independent review of the circumstances that led to the flooding at Edgecumbe. 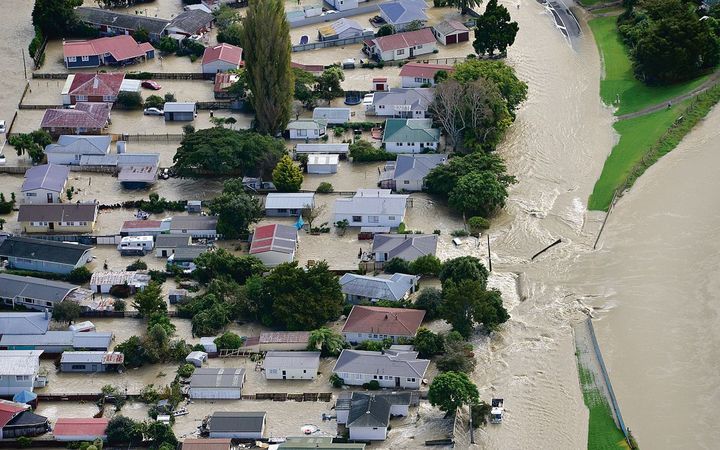 Water flows into Edgecumbe through a breach in the Rangitaiki River stopbank shortly before 9am last Thursday. Photo: Whakatane Beacon

"We need to be able to assure the community that this review will be independent, that it will look at all issues leading up to the adverse event [and] what lessons we can learn from it."

The terms of reference were still to be set and the other panel members yet to be appointed.

However, he hoped the review panel would be able to report back by the end of July.

The Bay of Plenty town was hit by a wall of water after a stopbank on the Rangitāiki River burst on Thursday, flooding the town and forcing its 1600 residents to flee.

A return home - for some

Several hundred residents in parts of north Edgecumbe will hopefully be able to return to their homes from 8am tomorrow, but it could be a much longer wait for those whose homes flooded.

That area covered about 130 homes, and water, power and wastewater were due to be back on then as well.

Those residents would be able to access the town from West Bank Rd, he said.

Residents of 45 properties on the east side of the Rangitaiki River were able to return home this morning.

The government said there were concerns temporary fixes to the stopbank in Edgecumbe would not be able to withstand more bad weather later this week.

Local MP Anne Tolley, who has been appointed to oversee any government assistance, said fixing the stopbank remained a high priority for the regional council.

"I understand that they are working consistently to try and shore that up but they are not 100 percent confident that it would withstand something of the magnitude that is being predicted."

Water levels in Edgecumbe were still thigh-high and it was unlikely residents of flooded houses would be able to return home by the end of the week, she said.

Prime Minister Bill English earlier told Morning Report the government was discussing a support package for the town, with more details to be released in the coming days.

The Whakatāne District Council said it hoped to open further areas back up as soon as it could.

Building inspectors would start doing full checks of buildings tomorrow, to determine which houses could be repaired.