Dozens of people have walked out of a public meeting in Whakatāne tonight about the response to this week's flooding - and the cause of it. 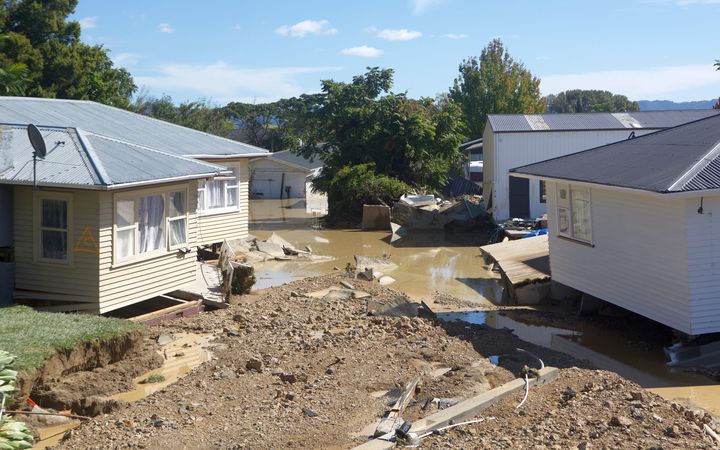 Edgecumbe remains cordoned off and empty after the Rangitāiki River breached stopbanks on Thursday, and about 1600 people evacuated the town.

While water levels had stabilised and a temporary stopbank had been put in place, it could be weeks before the town was fully drained of floodwater.

Tensions ran high at tonight's public meeting, as council officials fronted up to about 500 locals, including Edgecumbe evacuees.

Many wanted to know when they would be allowed back into their homes and why flood barriers were not strengthened after serious flooding in 2004. 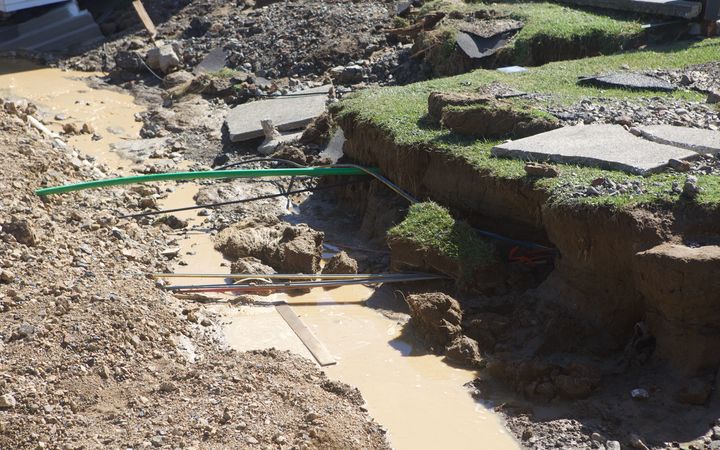 Floodwaters tore out huge chunks of the ground around the Edgecumbe homes. Photo: RNZ / Leon Menzies

Some complained about not having enough warning about the evacuation, or even being told to prepare to leave their homes.

They said there were no sirens or other loud warnings to alert them to the danger.

The chief executive of the Whakatane District Council, Marty Grenfell, said those concerns would be investigated.

Earlier today, the Whakatāne mayor said the worst-hit part of Edgecumbe looked like it was hit by an earthquake, rather than a flood.

The street in Edgecumbe that bore the brunt of the impact when a stopbank on the Rangitāiki River broke on Thursday morning looks more like an earthquake hit it than a flood, said mayor Tony Bonne.

Several houses on College Road - an area that was in the direct path of the wave of water that poured into the town - have been pushed off their foundations.

They looked twisted and broken, and many will be beyond repair.

In the hurry to evacuate, there were cars that were left behind still cars parked outside, but the driveways have been buckled and undermined.

There was debris lodged in the fences, and there was gravel and uplifted tar seal from the road covering many front yards.

While much of the water has drained away from those homes, it was obvious that there would be a big clean-up effort needed to get things back to normal. 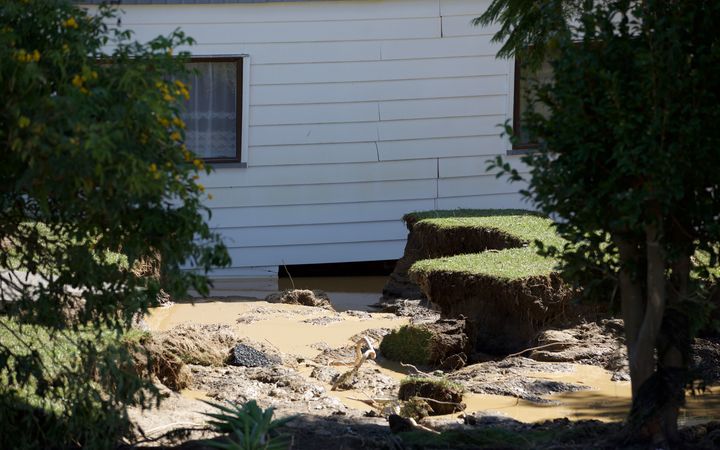 Houses were pushed off their foundations by the floodwaters that engulfed Edgecumbe. Photo: RNZ / Leon Menzies

Mr Bonne said he was "shocked" by the scale of the damage.

"It's quite mind-blowing when you see the damage that's been done," he said.

"You'd think it was another major earthquake, the way you look at the houses. You think, hey, Kaikōura's here in Edgecumbe, but it's not, it's a flood, it was a river going through people's homes." 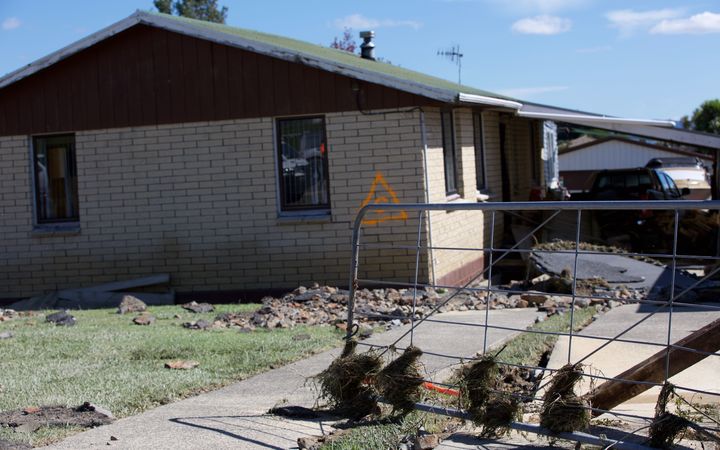 The flood damage in Edgecumbe looked more like the aftermath of an earthquake, said the local mayor. Photo: RNZ / Leon Menzies

College Road, which was in front of the failed stopbank, was the worst-hit area in the town.

"There'll be nobody living here for quite a period," Mr Bonne said.

The water from the swollen river initially poured into the town at a rate of approximately 100,000 litres per second.

There have been 13 trucks and three diggers working to repair the stopbank. The breach was closed last night, which stopped water from flowing into the town. 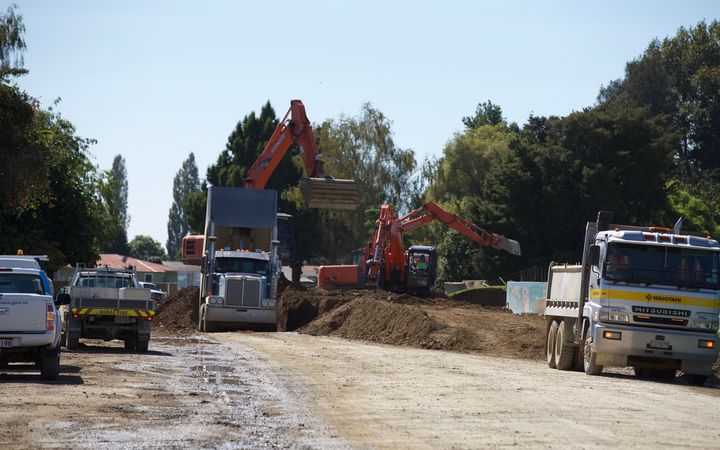 Truck drivers and digger crews are already hard at work, repairing some of the flood damage in Edgecumbe. Photo: RNZ / Leon Menzies

The temporary stop bank was being further reinforced to make sure it stands up in any more bad weather.

There were still houses in other parts of Edgecumbe that had water through them.

Mr Bonne said it would take up to two weeks to get all the water out of the town.

Some of it was draining naturally, but the rest of it would need to be pumped out.

Water and sewerage systems were still out, so nobody would be allowed back into the town until that was sorted, Mr Bonne said. 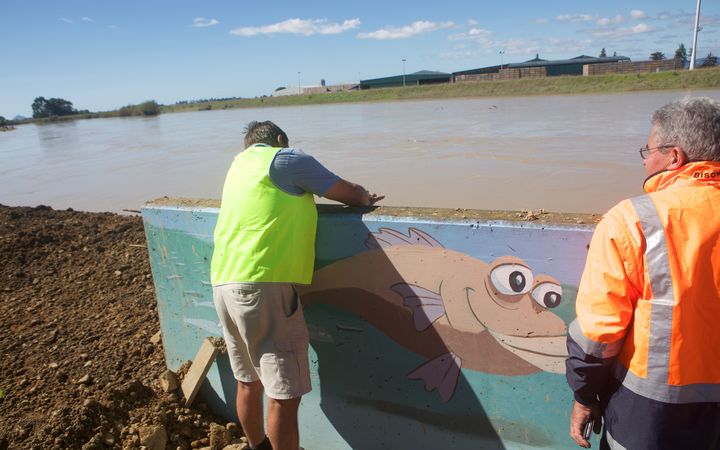 Meanwhile, some residents of a rural area north of the will be allowed back into their homes.

The district council said it was adjusting the exclusion zone cordon to allow the return of people to five East Bank Road homes to which water has been reconnected.

The cordon will be reduced further as safety requirements allow.

A specialist team - including people from the SPCA, the Ministry for Primary Industries and Massey University - has been going door-to-door in Edgecumbe to search for animals.

SPCA senior inspector Liisa Jones said they did know there were some trapped animals that were alive, and those would be the priority.

Some of the animal rescue teams going in to check houses have been decked out in wetsuits and helmets.

A hen and two dogs were among the animals rescued today.

Gina Kemp from the SPCA's national rescue unit said the hen was found keeping out of the floodwaters on top of a shed.

A chicken is rescued from the flood debris in Edgecumbe. Photo: RNZ / Leon Menzies

The hen was pretty "freaked out", but they were able to lure her down with some food.

"Unfortunately from being stuck on top of the shed, it's gotten very skinny, it's had some feather loss, I'd say it's probably been in the water," she said.

The chicken would be checked out by vets, before it was hopefully reunited with its owner.

Ms Kemp said they had also found cats, dogs, rabbits and rats on their checks.

There was also a pig running around that they hoped to catch. 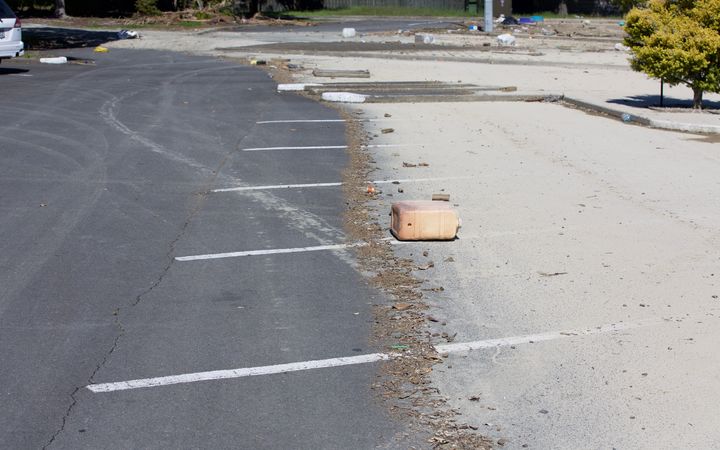 The high water mark can clearly be seen on the streets of Edgecumbe. Photo: RNZ / Leon Menzies