A New Lynn resident who saw his front yard quickly fill up with water yesterday had to rip the bars out of a window to get to safety. 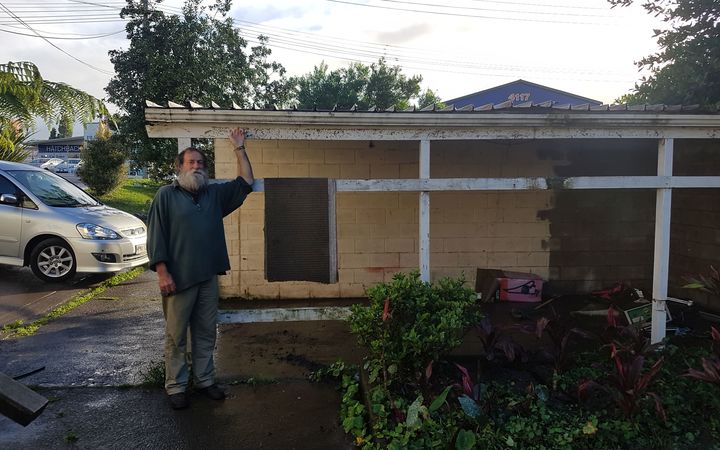 Sudden flooding after heavy rain yesterday afternoon saw vehicles pushed down driveways and more than 320 homes inundated across the city.

Families were forced to stay in emergency accommodation after water gushed into buildings during the massive storm.

New Lynn resident Rodney Johnson said it was "frightening" to watch as his whole front yard quickly filled up with water, up to head height, yesterday afternoon.

A wheelie bin floated over a fence and was this morning sitting 30m away.

With the water too deep out the front to get out and the ground higher out the back, he decided to escape that way.

"So I climbed out the window here not knowing what the level was. I had bars up because I've been burgled a couple of times before, so I had to rip the bars out, open the window and I got a BBQ chair, put it here to stand on, but it floated away. So I wasn't sure how deep it was, as I got out the window there I fell to the ground and it came up to my waist. "

He then had to break down a fence and took his three dogs to the neighbours.

Once fire crews arrived to unblock drains, the water subsided quickly, he said. It left behind a dirty yard and a sodden BMW motorbike he had fixed up, which he said would need to be reassembled. 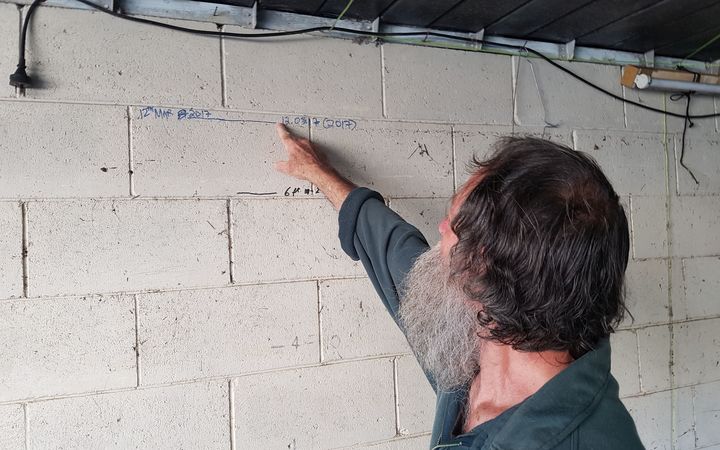 Mr Johnson has marked how high the water reached inside his garage. Photo: RNZ / Tom Furley

Water was about a foot deep in the house, leaving behind dirt on the floor and in cupboards and damp furniture.

He was not insured and mopping started yesterday

"It could take ages. At least a week because I'm doing it all by hand."

It was the third time his place has flooded severely since he moved in 28 years ago, he said.

The carpet he had when he first moved in had long since gone after being claimed by previous flooding, but the adjoining flat was redone just a year ago.

"Next door that was all brand new [carpet] so that will all have to be ripped out again."

Mr Johnson said the problem was the creek nearby, which picked up debris from around the area.

"[Council staff] come here once a month or so and do a little bit of a clean-out, but they could clean it out every day, but that's not going to solve it. Because as soon [as] it rains, it's picking up stuff from half a mile up the creek. It's bringing that stuff down so it doesn't matter if they clean it here, they need to trim all those branches or get rid of those trees or just seal it all the way through."

'This is just not acceptable'

Local contractor Brendon O'Hanlon was this morning doing some scheduled repair work to fencing at the Great North Road apartment block that was flooded yesterday, and was amazed to see how high the flooding had gone.

However he said it was not unusual.

"I've seen it here on plenty of occasions over the years and what's been done about it? Who can answer that for me? Nothing's been done. I know, I've lived here for the last 50 years and this is a flood area that's never been attended to ever which I think is a disgrace. These people are paying rates like everyone else is, how come their house is flooded?"

He said drains were not cleared often enough and the drainage there was a disgrace.

"The drainage isn't up to its job. Why hasn't it been updated and something done about it before this has happened, because this is hundred of thousands worth of damage now. This is just not acceptable." 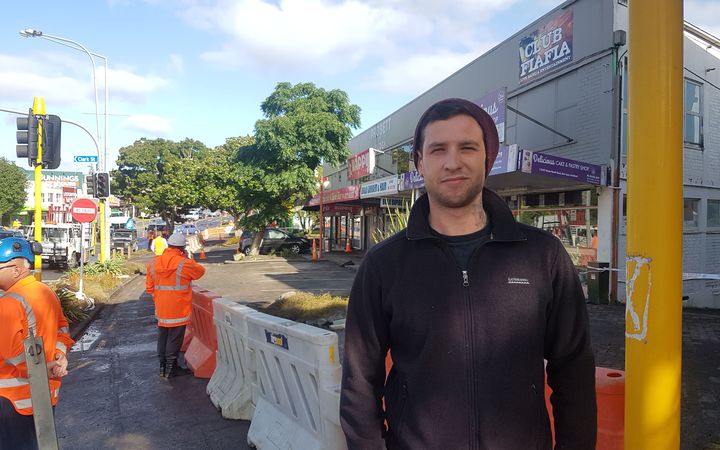 Further down the road in New Lynn, Josh Parbery was back this morning after escaping his flat with his pet rabbit, Weenie, in hand.

He lived in a flat with his recording studio business under the shops and had been in the process of moving out when the rain came.

"As I was coming to do another trip to pick up gear, I noticed cars trying to get through puddles and I thought it was a bit of a laugh. I saw some cars get stuck and thought it was pretty funny and then sooner or later, it just got really bad and I just panicked and ran down to my place. Before I knew it I was knee-deep in water in my own home. Pretty crazy."

A boarded up air-conditioning vent burst, letting water straight into his flat.

"Everything was basically flooding into my place through a hole in the wall. It was crazy.

"I only had time to grab my iMac, my laptop and my hard drive and put it up on my bench, which I'm really grateful for because I have a lot of music recordings on that computer and if I lost that that's like my whole music career gone. So I got that sorted and I managed to save my pet rabbit. 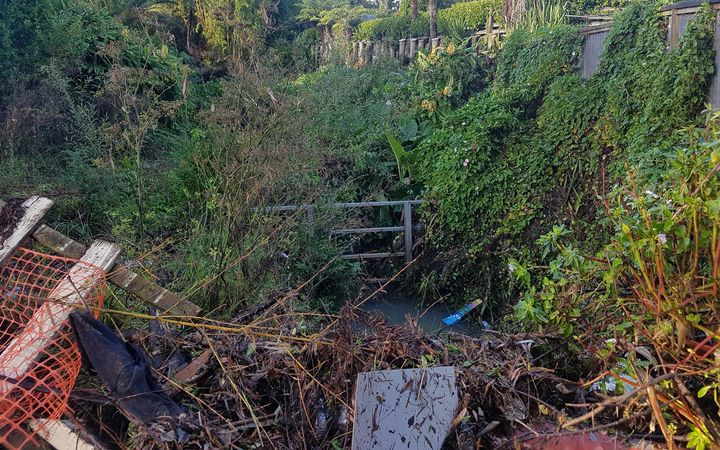 Debris has choked the small stream, which turned into a raging torrent during the heavy rain. Photo: RNZ / Tom Furley

He said half of his possessions were still there and he had lost a lot.

"There's a whole lot of staging I had built which cost me thousands of dollars. I've got a nice piano in there that's ruined now, and have a lot of audio gear that's ruined, so I'm quite sad about that, but luckily it's insured."

While he was able to stay at his parents' house, Mr Parbery was blocked when he tried to get back in to collect some of his possessions this morning.

Less than a hundred metres up the road, tattoo artist Geoff Thomas was among those cleaning out businesses.

"We're lucky, we're upstairs, so this is nothing compared to what others are going through."

The roof had leaked, and the front entrance and stairwell were covered in dirt.

"Just a bit of mopping, probably give the toilets another clean with the water pushing back up and what not, so we'll give that a clean and make sure everything's nice and tidy for the first customer to come in." 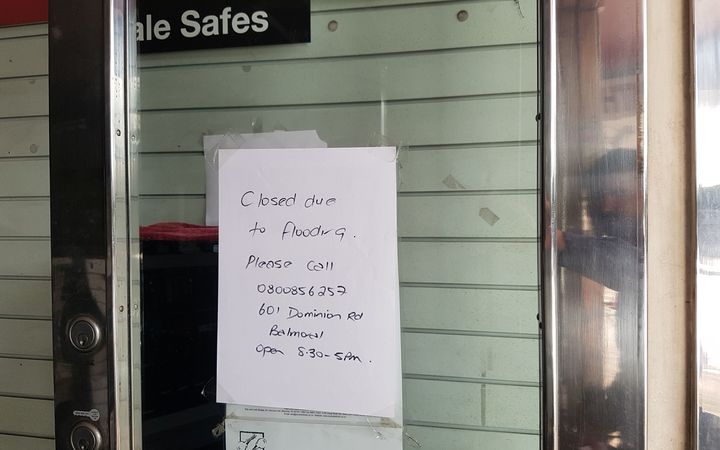 Meanwhile, Coromandel Civil Defence said it would be a month before normality was restored in the wake of the storm that began battering the region last week.

Further rain over the weekend brought more slips and threats to houses in the district, following last week's floods.

Civil Defence Controller Garry Towler said 12 private properties were a priority to be assessed for safety and sanitation.

He said it was difficult to know the extent of the damage, as many had been enveloped by slips.

Mr Towler said all council services were up and running and roads were open.

But up to 30 sites owned and managed by the council needed repair work, such as stabilising slips and clearing debris.

Among those sites is the beachfront entrance to the Whangamata Surf Lifesaving Club, which has been washed away and needs rebuilding.

The Hauraki District Council said floodwaters had receded there, but people in Waihi and Paeroa were being asked to conserve water due to sediment in rivers.

Aucklanders are also being asked to keep conserving water, so a boil-water notice won't have to be issued.